One of the alerts that went out on Friday.

Friday delivered a big test for NZ’s tsunami response. How did we do?

By Ursula Cochran
Guest Writer
Made possible by

One of the alerts that went out on Friday.

It was an exceptional morning: three large earthquakes within six hours, and an unfolding of events that put our emergency preparedness to the test. On this question, that the tsunamis that materialised on Friday March 5 ended up being relatively small is not what matters; what matters is the way we responded.

The first of the large earthquakes, a Magnitude 7.1 off East Cape, was felt throughout New Zealand and forced many to start their day at 2.30am. The second and third earthquakes, M7.4 and M8.1, centred near the Kermadec Islands, were barely felt on the main islands of Aotearoa. 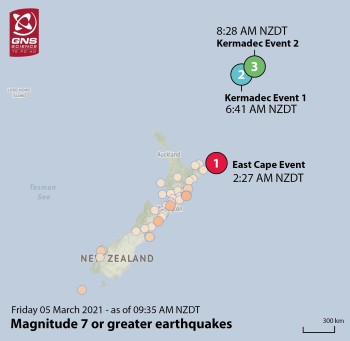 They presented different categories of threat. Tsunamis are classified as “local”, “regional”, or “distant”, depending on how long they will take to first arrive at our shores. The first, in the early hours of the morning, was local. A local tsunami is triggered so close to land that the first waves arrive in under an hour. Successful evacuation relies on people heeding the natural warnings because there is usually no time for an official warning.

After the M7.1 East Cape earthquake, in the middle of the night, people of north-eastern Te Ika a Māui used the long, strong shaking as the sign to get gone and head inland or to high ground. It was so encouraging to see people take this action, en masse, without question. Whether driven by human instinct, or mātauranga Maori, or planning by local Civil Defence and Emergency Management (CDEM) groups, or education through projects such as the East Coast LAB, or even peer pressure, people who evacuated did the right thing. There was a tsunami from the M7.1 East Cape earthquake. Everyone was safe by the time it arrived. Success.

A regional tsunami is triggered a bit further away, and will arrive at the coast within one to three hours. It is not as far away as a distant tsunami, which offers more time to prepare, but far enough that we rely on an official warning for evacuation because the triggering earthquake is unlikely to have been felt for very long or strongly, if at all. There will be no self-evacuation underway. That creates a high-pressure situation for those involved in producing official tsunami warnings. On Friday we had two such events.

In this case the events originated in the Kermadec subduction zone, northeast of New Zealand. This is a giant fault where the Pacific plate subducts beneath the Australian plate. It has been on the radar of kiwi tsunami scientists because it is a breeding ground for the troublesome regional tsunamis. Tsunamis from our local subduction zone – Hikurangi – will have much shorter travel times but at least we will experience an alarm from the earth itself, the natural warning of the earthquake, and be able to self-evacuate.

At 6.01am on Friday, the all-clear was given for the locally generated tsunami, three and a half hours after the earthquake. People were descending hills or trying to get back to sleep, when, at 6.41am an M7.4 earthquake occurred near the Kermadec Islands. At 8.28am an M8.1 earthquake occurred in a similar location. The earthquakes were too far away for shaking to be felt strongly in Aotearoa, they were outside the area for which GeoNet sends notifications to phones, but both were big enough to potentially trigger tsunamis with travel times to New Zealand of between one and three hours. The challenging “regional tsunami” scenario was unfolding.

How do we know whether a tsunami is coming? Earthquake location, magnitude, depth, and style of movement are important clues in determining whether the sea floor has moved and displaced seawater. Once seawater is on the move as a tsunami, it can be detected in the open ocean with technology such as DART buoys (pressure recorders on the seafloor connected to a buoy at the surface which sends data back to land), or on tide and sea-level gauges around coastlines. If you have time and a good handle on the earthquake, near real-time modelling of the tsunami can provide detailed estimates of tsunami characteristics.

Despite those tools, the Kermadec earthquakes present a particularly challenging tsunami warning scenario. In terms of networks of relevant data, they occur in the middle of nowhere. There is a pinprick of land at the summit of the Raoul Island volcano that has a seismometer and a tide gauge on it. Unsurprisingly, given the proximity of such a powerful quake, the instruments have not been heard from since the M8.1 event.

So, we revert to data from the Global Seismic Network to tell us about the earthquake and, at the best of times, it might take 20 minutes to get a reliable magnitude and depth. Meanwhile the tsunami is on its way. If we’re lucky there’s a functional DART buoy between us and the earthquake source that will tell us how big the tsunami is in the open ocean. If not, we won’t see it again until it registers on our tide gauges. At that point it has already arrived.

Tsunami scientists had already thought this through. They have put in hours of work to develop likely scenarios and model tsunami propagation from some of New Zealand’s most hazardous potential tsunami sources. Therefore, instead of nervously twiddling their thumbs waiting for minimal real-time data while a tsunami approaches, they can select and work with the pre-calculated scenario that is most similar to the earthquake that has just occurred.

The Tsunami Experts Panel (TEP) did just this when they were called to advise the National Emergency Management Agency (NEMA) on how to respond on Friday. At times like this, the TEP is our beacon of light in a huge dark ocean. From their observations and experience they concluded a tsunami had been triggered by the M8.1 Kermadec earthquake and it would pose a threat to New Zealand. NEMA issued official warnings. Local CDEMs acted on the warnings and individuals evacuated again – this time without having felt any earthquake. There was a tsunami from the M8.1 Kermadec earthquake. Everyone was safe by the time it arrived. Success.

The fact that the tsunamis weren’t very big in no way suggests the analysis was wrong. A small difference in the area of crust broken by the earthquake, how much it moved, and even the direction of earthquake rupture can make a big difference to tsunami size – and these features can take months of study for scientists to determine accurately. In the heat of the moment, what we’d hope for is an appropriate, erring on conservative, estimate of the tsunami threat. And that’s what we got.

We have many potential sources of tsunami, some right on our doorstep, others across the Pacific Ocean. The more we practise, the closer to perfect we will be when the big one comes. Each event gives everyone a chance to do better next time. As multiple events unfolded on Friday, decisions had to be made by different groups around the country with limited information to draw on. It wasn’t perfect: there were gaps in procedures, there were traffic jams, there was some uncertainty. But, overall, we responded very effectively.

March 5 2021 saw many years’ of tsunami response coalesce in one day. It provided an illustration of how a wide range of tactics, at every level from personal to political, are required in responding. The science continues to be developed to speed up characterisation of earthquakes, near-real-time tsunami modelling, and to improve offshore monitoring capability. But Friday showed how far we have come already. It showed that New Zealanders are prepared to evacuate quickly for both natural and official tsunami warnings. We saw people taking responsibility for their own and their neighbours’ safety – driving, cycling and walking out of a danger zone. We saw scenes of care and preparedness – marae taking in strangers, mayors knocking on doors, parents trusting schools to look after children. And we saw that New Zealanders understand, critically, that high ground is a saviour.

She started at the bottom, now she’s changing the way we go to the toilet

Construction and tech are facing unprecedented shortages. Why?

Looking in vain for a PlayStation 5 or a new-build house to put it in? You're feeling the force of two big supply squeezes.
By Felix Walton
Guest Writer
18th January, 2022

There are cyborg children among us, and they shouldn't have to pay so much just to live.
By Susan Wardell
Guest Writer
17th January, 2022

For those with families in Tonga, it’s the not knowing that’s hard to bear

The naming of Taranaki Mounga

Taranaki Mounga or Mount Egmont? Your preference depends on which history you most align with.
By Airana Ngarewa
Guest Writer
17th January, 2022

Game-changer or greenwashing tool? The new climate law could go either way

If businesses have a better understanding of how climate change will affect them, they're more likely to work to mitigate their impacts.<br />
By Karen McWilliams
Guest Writer
17th January, 2022

Eight years after its demise, we ask the Big Day Out's New Zealand promoter if it could ever return.
By Chris Schulz
Features editor
16th January, 2022

Tatou Publishing is here to rock the va’a

Two Sāmoan writers have founded a publishing house to support women of the Pacific.
By Sisilia Eteuati
Guest Writer
The Spinoff has covered the news that matters in 2021, most recently the delta outbreak. Help us continue this coverage, and so much more, by supporting The Spinoff Members.Madeleine Chapman, EditorJoin Members

And why we need to keep it out of the community for as long as possible.
By Siouxsie Wiles
Contributing writer
15th December, 2021

Ten feel-good science stories you might have missed in 2021

Proof it hasn't been all bad.
By Mirjam Guesgen
Contributing writer
29th November, 2021

Why you should care about antimicrobial resistance

This impacts all of us, even if you are someone who has never needed to take antibiotics before.
By Siouxsie Wiles
Contributing writer
26th November, 2021

All there is to know about the new Covid-19 variant detected in South Africa.
By Siouxsie Wiles
Contributing writer
26th November, 2021

Here's what to do if you test positive.
By Siouxsie Wiles
Contributing writer