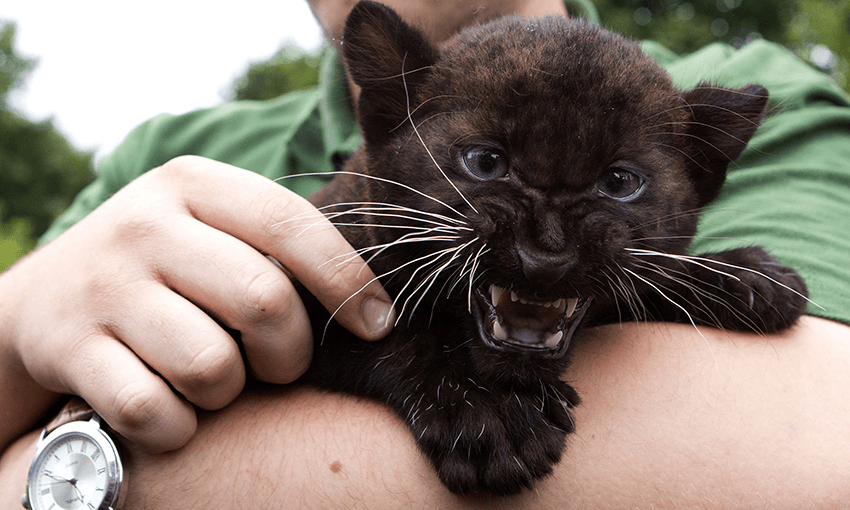 Not a bird, and also not the Canterbury Panther. DAVID GANNON/AFP/GettyImages

Does the Canterbury Panther exist? Six experts weigh in

Not a bird, and also not the Canterbury Panther. DAVID GANNON/AFP/GettyImages

Recent sightings of a large and potentially dangerous cat demand a social and political response, so we gathered a panel of experts to do just that.

New Zealand’s cryptids range from the mundane to the miraculous to the moose, but none resurface with such regularity as the Canterbury Panther. It feels like once a year, reports of sightings emerge from the south – a giant cat, much bigger than a tabby, jet black with a ‘tail as long as its body’.

“It was a great big thing with a head that was a cat and then a long body,” Juliearna Kavanagh told RNZ last week. “[It was] sleek, black and with a very long black tail. It was about the height of my knees, maybe a bit taller than my knees.”

Following the sighting, just outside of Blenheim, 1 News received more than 20 reports from hunters, farmers and council employees who had seen something similar.

Then, after lodging enquiries with MPI, 1 News was accused of scaremongering, with MPI saying it wouldn’t be appropriate to discuss ‘hypothetical scenarios’ – thus making the existence of the panther all the more likely to this writer.

So is it real? And what should be done with the beast if so? We engaged New Zealand’s finest conservationists, conspiratorialists and political minds for a cross-discipline response.

I love it – suspected puma sighting in South Island, locals dub it “the Tawnywha”.

Occam’s Razor can be applied. The average punter is well acquainted with domestic moggies. If an ordinary puss leapt out in front of your car at night your natural instinct would be “that cat just used eight of its lives”. We know the size of ordinary cats, whether it’s in the dark or 200 metres away in daylight. Mentally, we are self-conditioned to recognise cats, dogs, possums, rabbits, rats, sheep and cattle on the road. We are NOT driving along thinking, “I wonder if I’ll see a lion tonight”.

So when a cat big enough to scare a driver leaps out, I’m happy to accept on the balance of probabilities that it was bigger than a house cat. That doesn’t prove what it was but it probably indicates what it wasn’t.

When we researched this issue for Investigate 15 years ago, I personally interviewed a Canadian doctor/hunting enthusiast who was extremely surprised to see what he unequivocally described as a “cougar” near Oamaru while touring here with his wife. He was well acquainted with the species.

Tight border control is a relatively recent development in New Zealand. It is conceivable that pet pumas were brought to New Zealand by Californian gold miners in the 1860s, or escaped from one of the many circuses that used to tour New Zealand in the hundred years that followed.

There is a precedent in regard to snakes in New Zealand. A government report confirmed it may be true. And speaking of ‘Tawnywha’ there is also a possibility Australian saltwater crocs have been occasional visitors to NZ in warm summers.

So, suffice to say, I keep an open mind about things that may or may not go bump in the night as you drive at speed in the dark.

PS – if big cats exist in the south, they are apex predators with plenty of deer and millions of sheep at their disposal. No one has complained to date. Let them be.

There are a few things that make me sceptical about the Canterbury Panther, or the existence of any panther-adjacent large cat, the first of which is that there’s no origin story for it. How did it get to New Zealand in the first place? I’m not aware of anyone registering a lost panther or lost panthers, plural, given you’d need more than one to account for the sightings across multiple decades. I’m aware of an anecdotal account of a puma escaping from Lyttelton port in the early 20th century and wandering about the Port Hills, but I’m not aware of any documentary evidence supporting that.

The second issue is that panthers are apex predators which exclusively eat meat. They could theoretically survive on rabbits, but I find it hard to believe a panther wouldn’t have a crack at a sheep or a cow, particularly given this is the Canterbury Plains. I’m not aware of any reports of livestock being mauled to death.

The other issue is that there are plausible explanations for the large cat sightings, which is that we literally have massive cats wandering around the bush. Feral cats are big units, probably because they’ve been going to town on our native birds for decades; they’re way bigger than a house cat, and given so many panther sightings are from a large distance, often from a moving vehicle, it would make perfect sense that it would just be a feral cat.

If on the off chance there is a panther, it would probably be worth containing it within a particular area and declaring it a sanctuary, ideally with the agreement of a high country runholder.

As much as I like the idea of a rogue panther stalking the plains, I think it’s pretty far down the list of plausible cryptids, and become a bit concerned it gets lumped in with the likes of the Fiordland Moose, for example, which is probably real. We have both video and DNA evidence that shows moose were extant in Fiordland at least until the 1990s, and there’s circumstantial evidence they exist today. I’ve also been coming around to the existence of the Waitoreke, given the large volume of consistent sightings in the late 19th century and the historic accounts of tangata whenua.

There’s also the question of whether we have native species remaining in hitherto inaccessible places. It’s quite possible there are still kākāpō in Fiordland, which should be a priority for further inquiries about cryptids, given how important it would be for the surviving population. I’m hopeful that technology may help us solve these mysteries – the use of environmental DNA holds enormous promise. Perhaps we’ll be able to know for certain whether there is a panther in Canterbury.

Having not seen a photo, it’s difficult to comment on what this couple may have seen. Over the years, DOC has received anecdotal reports of large cats in the area. Our biodiversity rangers have caught a few big ones but no mountain lions to date. The biggest was not much smaller than a Labrador.

Feral cats have the same appearance as some common, short-haired house cats such as tabby, tortoiseshell and black. They can grow to a much larger size than house cats, though they don’t live as long. Male feral cats captured in the South Island high country averaged a weight of 3.75 kg and the heaviest male weighed 7 kg. You can expect a feral cat to be leaner and fitter than an average house cat.

Feral cats are natural predators and have a major impact on native birds, bats, lizards, mice, wētā and other insects. They can travel long distances and we know of a feral cat in the South Island high country that covered almost 6km in one night.

Populations of endangered kakī/black stilt, wrybill and black-fronted terns are greatly impacted by cat predation in braided riverbeds in the central South Island. Grand and Otago skink populations are at critically low levels in Central Otago, mainly due to cat predation.

The National Party caucus has decided that the issue of the Canterbury Black Panther is one that warrants proper and due consideration. We won’t be treating it as a conscience issue.

Our caucus will be having extensive discussions about this.

We will be taking this discussion back to caucus in the near future, and we will be announcing our position before the 2020 election.

I’m sceptical. There’s probably a better chance Phil Twyford will build 100,000 houses than there is of a panther being on the loose in Canterbury. But in the event it does exist, I suppose we could round it up and put it in a Shane Jones-funded panther park.