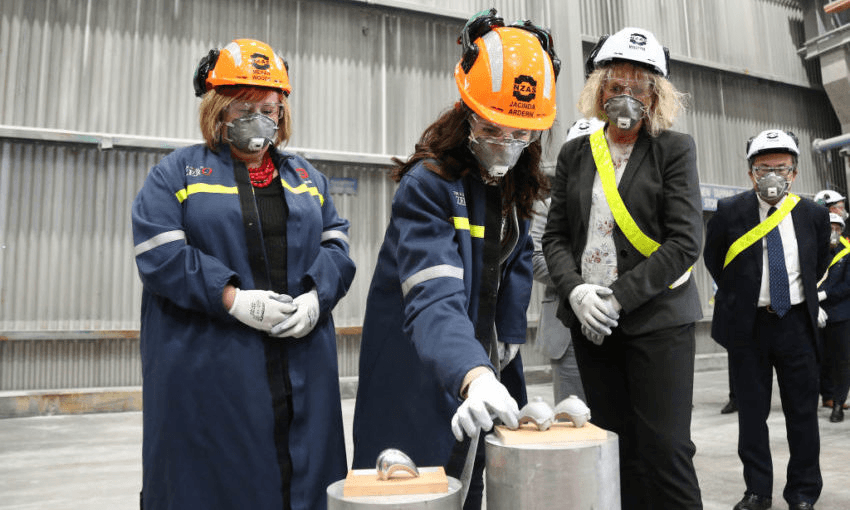 Jacinda Ardern on a visit to the Tiwai Point Aluminium Smelter in 2018. (Photo by Dianne Manson/Getty Images)

Jacinda Ardern on a visit to the Tiwai Point Aluminium Smelter in 2018. (Photo by Dianne Manson/Getty Images)

A truly ambitious solution would keep jobs in Southland, delivering on the promise of the Zero Carbon Act to make NZ all but carbon neutral by 2050, writes Nicola Gaston in a post co-authored with Sally Brooker, Justin Hodgkiss and David Williams of The MacDiarmid Institute.

Tiwai Point is in the news, again. Jeanette Fitzsimons, former co-leader of the Green Party and energy analyst, recently suggested her modest proposal for the future of the smelter: keep some of the aluminium smelting going, but release some of the extra no-emissions Manapouri hydro power on to the electricity market.

The lack of transmission lines capable of hooking the hydro power from Manapouri into the national grid is a sticking point, but one that the government is now signaling it is prepared to address by bringing forward $100 million of line upgrades. That’s still about $500 million short of the total cost of the infrastructure that would be needed to get most of that power (transmission losses are substantial) north of Cook Strait, but it’s a start.

On the other hand, there is a real human consequence to any changes to the current scenario at Tiwai: the smelter is a major employer, and the prospective costs to families must be a major disincentive to any change to the status quo. So can NZ Inc perhaps come up with a slightly less modest proposal – a truly ambitious one, even – that would keep, or even grow jobs in Southland and deliver on the promise of the Zero Carbon Act to make NZ all but carbon neutral by 2050?

It may, in fact, be that ambition is not just desirable here – it is necessary.

So what is the argument in favour of aluminium? Well, there is agreement that the aluminium smelted at Tiwai is “some of the lowest carbon, highest-purity aluminium in the world”. However, this is a reflection of the energy source more than it is of the product. There is an inescapable connection between aluminium and electricity which is interesting for enthusiasts of scientific history: aluminium was one of the last common metals to be discovered and isolated due to the difficulty of obtaining it from ore via chemical means. Therefore it came into common use only after late 19th century progress in the use of electricity and its ability to effectively ‘reduce’ (or add electrons to) the metal in its oxidised form in ores such as bauxite.

“Electricity is difficult and expensive to store,” says Jeanette Fitzsimons, and she is right. But different kinds of storage are differently expensive. For example, not all of them require additional investment in transmission lines. Her solution is to reframe the manufacture of aluminium as a form of energy “storage”, which leads to the question of what else we could do with this energy. Do we store it and feed it back into the grid, or produce other, more valuable and differently transportable products that are needed to fulfil our ambitions of a carbon-neutral economy?

Batteries are the most likely thing you will think of, when it comes to energy storage, but the issue here is not so much the manufacture of portable batteries for electronic devices. The manufacture of any product that requires energy input has the potential to be reversed to release that energy – aluminium is not a practical example of this, but using electrolysis to split water into hydrogen (which can be stored, or alternatively used to manufacture other chemicals including fertiliser) and oxygen is. The eventual burning of the hydrogen releases energy with only water as a product. Norway is a good example of this with the world’s largest electrolyser bank in operation. It is not really a scientific question of whether we could do this in New Zealand, but a question of whether the economics are acceptable to us as a country.

There is already investment happening in the hydrogen economy in New Zealand: how much of a difference to the economics would a major source of clean hydrogen make? We can’t tell you the business case, but we can tell you that the world needs a new energy carrier to replace oil and gas, and that the energy density of hydrogen makes it an attractive prospect. Internationally, trains, trucks, buses and cars are already being run on hydrogen. In New Zealand, there are already two Hyundai hydrogen-powered demonstrator cars, and plans are in place for us to manufacture our first hydrogen-powered bus.

If not hydrogen? There is the prospect of making future fuels, through smart catalysis to mimic the processes that plants use to make the carbon-carbon bonds that the widespread availability of oil has made us take for granted. Admittedly, these are not zero carbon as they release CO2 when burnt, but if they are made from captured atmospheric CO2 to begin with, then they can be carbon neutral and are likely to be needed as a part of the carbon neutral puzzle, for limited high-value applications, in future.

What other options do we have? Large scale redox flow batteries could be developed for energy storage that would be used to level out the grid directly, if getting the remaining non-renewable energy generation, including coal, out of our national system is the priority. A slightly more left-field idea (but one that would certainly deliver on the ambitious scale of our Zero Carbon Act) is the use of the Tiwai electricity to convert high-quality Southland silica into silicon suitable for solar cell manufacture in New Zealand.

Electricity can be used both to make the substances needed to convert the silica into high purity silicon, and also to recycle these so that a truly closed-cycle, ‘green’ process can be envisaged. In one aspect of this thinking, conversion of silicon into silica could be done using aluminium. The other product would be alumina which could be recycled back through the smelter. The other input would be salt water, used with electricity to make caustic soda, hydrogen and chlorine for purifying the crude silicon. The business case remains to be made, but certainly the idea of using renewable power to create materials that will produce more renewable power is exciting, and the kind of step change we should be looking for.

As scientists, do we know what the best of these options is for New Zealand now, next year, and from here to a carbon neutral 2050? No. But we know that there are options – there are many, many options. Yes, the one thing they all have in common is a need to invest. But we know that national scale, government investment is required to deliver on the Zero Carbon Act – and that regional development investment is necessary for us to deliver on the promise of a Just Transition. Change is coming whether we like it or not, and active investment is needed from the government to ensure that the costs of economic transition do not fall unfairly on specific communities.

We believe that the green electricity arriving into Tiwai is an opportunity, both for a carbon neutral New Zealand, and for the economic growth of Southland as a whole. It’s an opportunity that should not be overlooked for lack of the right business case, or for lack of ambition.