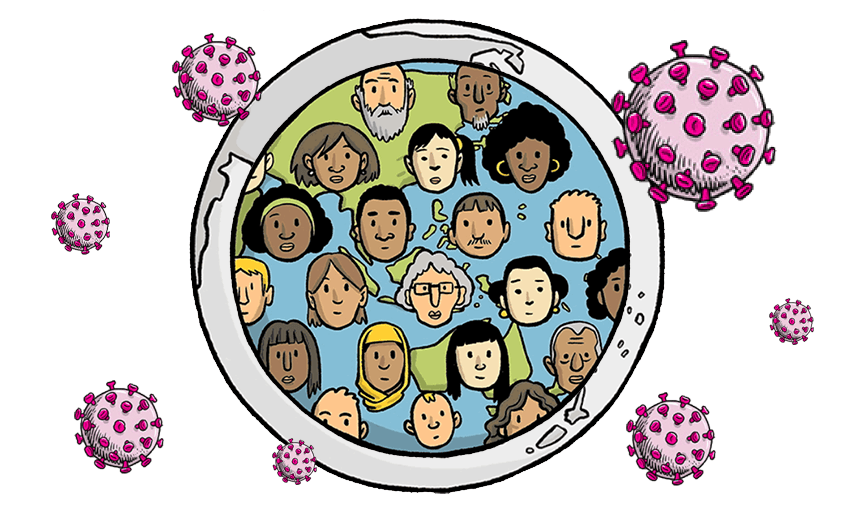 Why do some people get more sick from Covid? New research reveals the role genetics plays

A massive global analysis of people’s genes puts scientists one step closer to understanding who’s more likely to catch the Covid-19 virus and how severe their symptoms might be. Mirjam Guesgen reports.

One of the biggest mysteries surrounding Covid-19 is why for some people the disease is debilitating and deadly, while for others it seems to be little more than a cold. Now, thanks to a worldwide analysis of human genetics, scientists are a little closer to understanding what makes someone more likely to get the disease, and get it bad.

The information they’ve gained could help single out existing drugs that could be used to treat Covid-19 infections.

Scientists already knew that certain factors like being older, overweight or male make people more likely to develop more severe Covid-19. At the same time, things like being in large gatherings, being close to people or being in a place where more people have the virus all increase the likelihood of catching it in the first place.

But those factors alone still don’t explain all the differences in people’s symptoms or how vulnerable different people are.

“Clearly there is a role of genetics in Covid-19 severity,” says statistical geneticist Andrea Ganna, from the Institute for Molecular Medicine in Finland. “I do not think it’s overwhelming compared to other risk factors but it’s one of the many,”

An international consortium of researchers from around the globe, known as the Covid-19 Host Genetics Initiative, have combined the results of a raft of genetic studies into what’s known as a meta-analysis. They published their findings in the journal Nature.

This meta-analysis took genetic data from 46 studies, a total of almost 50,000 Covid-19 patients and two million people who didn’t have Covid-19 from all over the world, and looked for differences in the DNA of the groups.

By combining so many studies together, the meta-analysis could pick up on tiny differences that might be missed by a single study with fewer people in it, or by a study that only looks at a specific population of people, such as those with European ancestry in the UK for example.

The study’s authors found 13 different sections of DNA that were linked to Covid-19 infection or severity. Differences in the genetic code of those sections make someone more or less likely to become infected by the virus or develop severe symptoms.

The increase in risk of becoming infected or suffering from a severe case ranged from around 4% to up to 74%, depending on the section. That means changes to DNA in that section increased the risk by 74% compared to someone without the changes. The initial risk itself may still be small.

The researchers also identified some sections that contained genes that have a known function. Those genes do things like make proteins that support the body’s immune response or gobble up virus genetic material.

For example, changes in one section of DNA, dubbed FOXP4, increases the likelihood someone will develop severe Covid-19. Researchers know from previous studies that changes there also make people more likely to develop lung cancer or lung disease, potentially by restricting the body’s ability to make certain cells that line the inside of the lung. Those cells help protect the lung from infection and pollution. Fewer cells and the lung is more at risk.

Another section, called TYK2, was linked to the likelihood that someone would be hospitalised for Covid-19. Changes in this section of DNA have previously been linked to having an immune system that doesn’t function as well as it should (immunodeficiency).

The study’s authors say their findings will be useful for homing in on existing drugs, or drugs that are currently in development, that could be used to treat Covid-19.

“That would serve the reality that, while we have vaccines, we still obviously need to have effective treatments for patients,” said Mark Daly, co-author of the study and founder of the Analytic and Translational Genetics Unit at Massachusetts General Hospital, in a press conference.

However, to Daly’s knowledge, there aren’t currently any drugs targeting the specific sections of DNA they highlighted in their study.

Also the study identified six DNA sections that have no known genes associated with disease. That is, scientists don’t know what that section of DNA does.

“One of the biggest questions in human genetics [is] what do non-coding variants that aren’t attached to a specific gene actually doing?” said Benjamin Neale, co-author and a statistical geneticist from the Broad Institute in the US. He thinks the DNA in those sections might influence genes sitting in other parts of the genome, or that their function just hasn’t been discovered yet.

The meta-analysis project is still going and researchers have already identified, but not published, 10 additional sections of DNA that relate to Covid-19 severity or susceptibility. “The work continues,” said Daly.

The next steps are to understand how the risk associated with different virus genetics (for example the riskiness of different virus variants) interact with the risks from people’s different genetics. They also want to see if there’s a genetic reason for whether people develop long Covid.

The researchers point out however that the environment still plays a massive role when it comes to Covid-19 infection. “When you’re dealing with infectious disease there’s a huge role of the environment because obviously if you never get exposed, you’re never going to have severe covid,” said Daly.