AI-made art is more than a gimmick. It shows us how computers think. But if machines can be creative, Mirjam Guesgen asks: have we lost the last thing that makes us different from them? Have we lost a part that makes us human?

The art in hanging on the walls of this Wellington art gallery isn’t the creation of a person. All the prints here were dreamed up and made by an artificial intelligence.

Seeing the kinds of art an artificial intelligence makes shows computer scientists how those algorithms think — something that has eluded even the engineers that develop the programs.

The algorithm creating the images was developed by programmer Tom White, whose day job involves lecturing on computational design at Victoria University of Wellington. From an artistic standpoint, he wanted to uncover the “visual language” of an ant. Essentially, figuring out at what point an abstract image is so abstract that it no longer resembles the object it’s based on. “It’s almost a more symbolic look at what the category is,” White says.

He started by taking some 1,300 ant images from an openly available dataset called ImageNet. He used those images to train a specific type of artificial intelligence called a convolutional neural networks – the programmes that allow computers to, for example, recognise or filter pictures online.

Once trained up on what an ant is, White ran another programme alongside that gave the neural network the capability to express “its inner ‘antness” as he puts it. The programme was like Photoshop but for computers.

“Usually when you go to use the computer, you have a goal and you’re using the computer as a tool… What I was trying to do with my process is to invert that relationship. I wanted the computer to be able to express itself but to do so I had to make a tool for it.” Tom White in front of some of his AI-created ant paintings (Photo: Ben Newman)

White sets the parameters for the image such as size and that it should be a single layer then let the neural network loose to do the rest (where to position the brush strokes, how thick the strokes are, the colour of the foreground and background). The algorithm generated 63 pictures of what it thinks an ant is — a sketchbook of first attempts if you will.

The curation of the images was left up to algorithms as well. White ran the first attempts through image recognition systems (such as Google Cloud’s Vision), which selected the ones that were the most ant-like, then hung the images in the gallery so that viewers could see the progression from the first cut through to the final, ultimate ant images.

“The exhibit itself feels like machine learning,” White says, referring to the way the algorithm learns and develops as it goes.

The artwork has a practical application too, although that’s not White’s goal with making it. It’s a glimpse into the computer’s “mind”.

Machine learning algorithms and neural nets are given thousands of images, text, data, what have you to analyse and learn from. They then do their job, sorting images on your phone into categories so you can easily find them again or helping doctors diagnose cancer from X-ray images. But there’s a black box in between, where even the people coding the algorithms don’t know exactly what it’s doing. 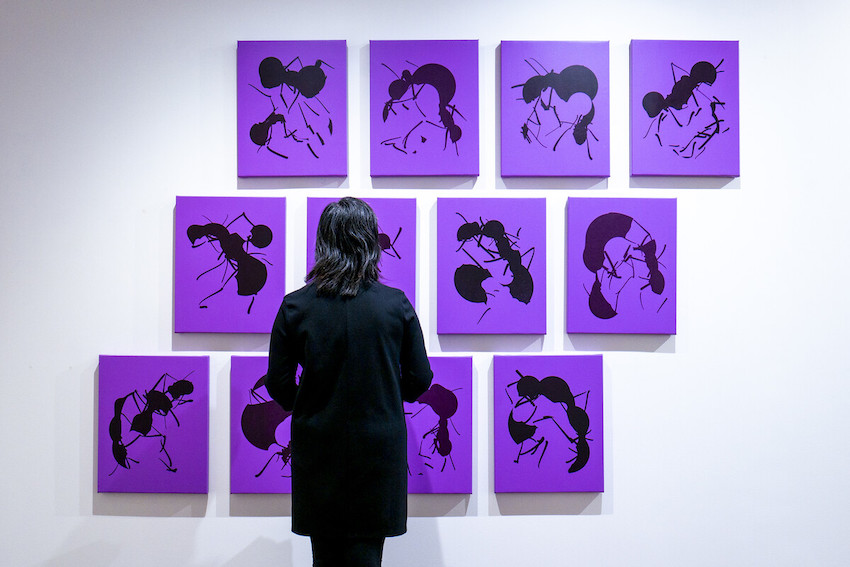 “You can see a template of what the system thinks is an ant. That’s useful to reverse engineer what it might do,” says White. For that reason, the art is popular with Google Brain (the AI research team behind Google Translate, among other things) and the artificial intelligence team at Massachusetts Institute of Technology.

But like the majority of art history, the artworks reflect a particular point in time. Like Renaissance painters used oils to show developments in philosophy, literature and music, the artificial intelligence uses code to highlight developments in science and technology.

It begs the question, who is the artist? White or the AI? He likes to think of it as a co-creation. “Sometimes I’ll loosely speak of collaborating with the algorithm I created, but I don’t give the system any more agency than that. The AI as the artist is definitely a narrative that others embrace though.”

The art also makes you wonder, if computers can now be creative, have we lost one of the last things that separates us from them, the thing that makes us human – our creativity?

Indeed there have been numerous examples in recent years of algorithms creating poems, stories, blogs, even “beautiful” moves in a board game no human has yet thought of. The beauty of creative artificial intelligence systems is that they, theoretically, have no culture or preconceived notions behind what they’re generating. They don’t know that an ant is found on a leaf or that they might be linked to pest control. In that way, they’re less constrained.

In other ways, the programmes are only as good as the person who makes them or the images they’re trained on. “These systems are just reflections of what we’re training them on,” says White.

He also thinks we can get too caught up in the semantics or philosophy of AI art. “It’s an interesting discussion but people can get lost in it.”

Ants the exhibit was presented at Thistle Hall from 22-28 February but you can view the exhibit virtually here.