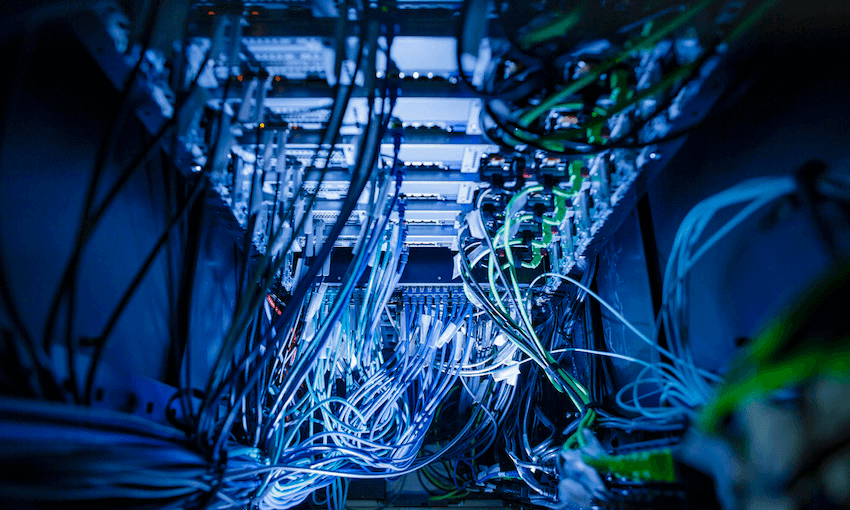 How to cool down your data

By Ruth Beran and Vanessa Young
Guest writer
Made possible by

Whether you’re mining bitcoin or Googling yourself, you’re creating a lot of heat somewhere. A group of New Zealand scientists have found a way to take the heat off data centres.

Each time you Google something, a data centre responds. This data centre – a repository for masses of information – is one of many worldwide (there are four in New Zealand). Globally, data centres use almost ten times as much electricity per year as the whole of New Zealand, and their collective energy use is projected to treble in the next decade.

It turns out not all electricity used by data centres goes into running your search query.

“When you run big data centres, you pay twice for electricity. You pay to run the computer, and you pay to get rid of the heat it creates,” says MacDiarmid Institute researcher and Victoria University of Wellington (VUW) associate professor Ben Ruck.

With the potential to cut the amount of global electricity used by data centres by 100-fold, from 3 percent to 0.03 percent, Associate Professor Ruck and a team funded by the MacDiarmid Institute have been working on this problem for over a decade and believe they have found a solution.

“I’ve been at this job for about 50 years, and this is by far the most exciting thing I’ve ever done,” says VUW Emeritus Professor Joe Trodahl who initiated the project with Associate Professor Ruck in 2005. “The fundamentals are new and the applications are clear. Rarely does one work on a project from its inception to take it to a stage where those two things appear in front of you.”

The MacDiarmid team have been working with the rare earth nitrides, a family of 14 compounds which act as magnetic nanomaterials to find a way to reduce the temperature at which these giant computers operate. The family includes samarium nitride and gadolinium nitride. They’ve combined these with superconducting electronics, based on materials such as niobium.

Computer memory elements made from magnetic superconductors like samarium nitride could operate at really low temperatures, unlike most memory devices which only work at room temperature. Bathed in liquid helium, the wires in the computers (which is where most electrical heat is lost) could also be superconductive, and therefore generate little or no heat.

“That’s where the big heat load success comes from,” says Trodahl. “People all around the world are trying to make memory devices that work at low temperatures. We stumbled across the material which looks like it is the most likely to succeed at the moment.”

So far, a total of eleven scientists and eleven PhD students have been supported by the MacDiarmid Institute to work on the project. The team has been patenting as they go, with two patents already and more on the way, and 2017 KiwiNet funding to help.

Associate Professor Ruck says that while the project is still some way off commercialisation, there are good prospects for technology like this to one day be manufactured in New Zealand. The team is already collaborating with a US company to develop the ideas further.

“These components are tiny and light and high value. We could ship them anywhere,” says Ruck.

The project is an example of how a long-term deep-research project, funded over many years by a Centre of Research Excellence (CoRE), starts to show its usefulness in the practical world, says Emeritus Professor Trodahl.

“We started this work back in 2005. It’s taken over ten years to get close to showing its true value.  Without CoRE support, we would never have got this to this stage.”