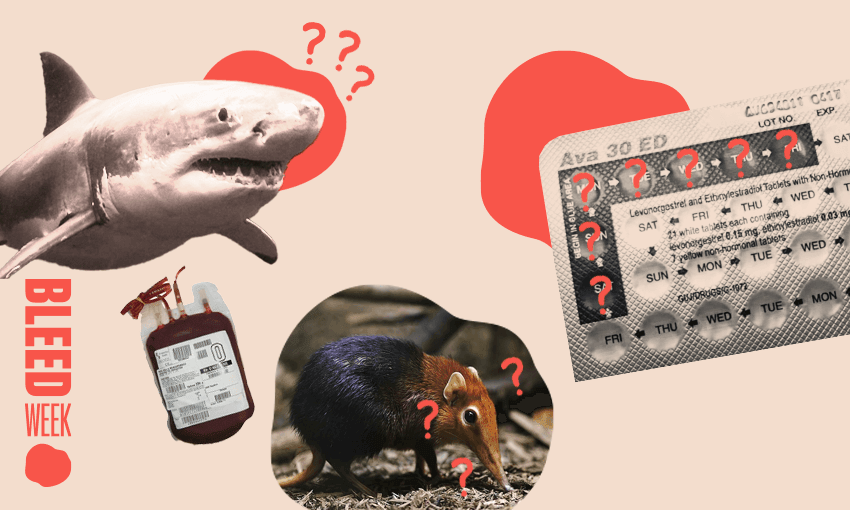 Everything you ever wanted to know about periods, part one

You asked us all your period questions and we took them to the experts. Today: the nuts and bolts of bleeding and busting some myths.

If there’s one thing we’ve learned in researching for Bleed Week, it’s that everyone learned about periods in a different way. Some had a book left on their pillow from a period fairy, others had a tampon dunked in a glass of water in front of their class. Some relied entirely on Dolly Doctor and urban legends shared at sleepovers, and others never got taught anything at all.

So we put the question out there – “what do you want to know about periods but have always been afraid to ask?” – and took your inquiries to a panel of experts across the country.

What is the appropriate and most inclusive language to use around periods these days?

You may have noticed we haven’t been gendering periods during Bleed Week, and there is a good reason for that. “Referring to ‘people with periods’ or ‘people who menstruate’ is both more accurate and inclusive than using gendered terminology,” explains Claire Black, general manager at rainbow support organisation Outline. “There are many people who menstruate who are not women. This can encompass transmasculine people, including trans men, as well as some non-binary people, some intersex people, and other gender-diverse people.”

I am a person with a period swimming in the ocean. Can a shark smell me?

“This is an old wives’ tale,” says Clinton Duffy, leading shark expert at DOC. While sharks have an extremely sensitive sense of smell that can detect one part of blood per million of water, this is only one sense that sharks use to navigate and find food. “A shark in the immediate vicinity of a swimmer may be able to detect minute traces of blood, but they would have already been alerted by the vibrations and sounds associated with swimming,” he explains.

There is also a question of motivation – Duffy has dumped 40-50kg of minced fish into the sea and waited hours for sharks to show up (and sometimes they don’t at all). “Like most predators, sharks are typically cautious animals and do not generally rush in and bite the first object they come across,” he explains. “Finally, sharks do not usually view humans as prey hence the very low incidence of shark attacks, particularly here in New Zealand.”

OK well, if the sharks won’t bite then I will: what… is… a period?

“A period is the body’s normal response to not becoming pregnant,” says Michelle Wise, deputy head of obstetrics and gynaecology at the University of Auckland. “Every month the lining on the inside of your womb builds up getting ready for a fertilised egg to implant. If the body recognises that your hormones have changed and are indicating that you are not pregnant, then all of that extra lining just sheds and sloughs away, and that’s what you see as your period.”

Jane Girling, associate professor in the department of anatomy at the University of Otago, explains that this lining is known as the endometrium. “If the pregnancy doesn’t occur, then the endometrium will start to break down… The tissue and blood then exit the body via the cervix and the vagina. In the meantime, the endometrium repairs and the whole cycle begins again. It is remarkable to think this happens throughout an individual’s reproductive years.”

How much blood do you lose on average during a period?

Dr Claire Henry, research fellow in Otago University’s obstetrics department, says the key thing to emphasise is that everyone’s flow is different. “For someone with a ‘normal’ period, that is, bleeding around for around five days and changing a pad/tampon every four or so hours, the average blood loss per cycle is around 30ml,” she explains, comparing it to three tablespoons or a shot glass. “But people can lose less than that, or up to around 80ml in a cycle. 80ml or more may suggest heavy bleeding, which is an important symptom to have checked.”

How much blood can I lose over a lifetime? No don’t tell me! No do!

Henry did some maths on this one for us. “If a person has a regular ‘normal’ menstrual cycle (ie 12 periods a year), and has their period from 14 to 50 years old, they will have had approximately 430 periods. 430 periods at 30ml each equals approximately 13 litres in a whole lifetime.” However, she encourages people not to think about it as “losing” blood. “Your body regenerates the lining of the uterus after each period, and with each cycle it will fall away again.”

Is it OK to donate blood while I am bleeding or is that simply too much blood leaving too many places?

“There’s no problem with donating blood while you’re menstruating if you’re in good health,” says a spokesperson from the NZ Blood Service. “While it’s true that you do lose a little iron with your period (0.5mg of iron per ml of blood lost), this should not be a problem if you are getting enough iron in your diet.” All NZ Blood donors have their haemoglobin levels checked before donation and they’ll let you know if your levels are looking too low to donate. If you have missed your period, you may be asked to rule out pregnancy before you donate to avoid any stresses on you or your baby’s circulation, or iron levels.

What are the most common period symptoms?

“Discomfort or pain with menstrual periods is really common and can start from your very first period,” says Girling. “Some people also experience other symptoms like bloating, back or leg pain, headaches and bowel symptoms.” Those bowel symptoms, or what an inquirer referred to as “bad guts”, are extremely common, elaborates Wise. “Gastrointestinal side effects are the effect of prostaglandin hormones, those are the ones that cause the nausea, the vomiting, the loose stools, the diarrhoea.”

If there is so much variation in symptoms, how do we know what is abnormal?

“This is a great question,” says Henry. “It can be hard to tell what is normal/abnormal, and everyone is different.” Abnormal period symptoms can include bleeding longer than seven days and bleeding between cycles, heavy periods (changing tampon/pad hourly, or the presence of clots), short or very light periods not caused by contraception, severely painful periods, bleeding after sexual intercourse and post-menopausal bleeding.

“Periods shouldn’t interfere with normal life too much,” she explains. “Another way to think of it is – is this disrupting my work, school or personal life? Is this having an impact on my mental health?” Wise agrees. “If pain or other symptoms start interfering with your daily life, then it is time to go and get some help.” If you do believe your periods are abnormal, it is important that you make an appointment with your health provider, GP or Family Planning clinic.

What is the cramping pain, where is it coming from, and why won’t it stop?

Imagine the uterus as a giant, muscly organ, says Wise. “That huge strong muscle layer is basically contracting down while the body is trying to get rid of that thickened lining to start again for the following cycle.” Another source of the cramping is that all the tiny little arteries in the uterus are squeezing shut when you have your period. “By cramping down those little arteries it is stopping the blood flow, so it is our bodies’ natural physiological way of stopping ourselves haemorrhaging. It’s actually quite amazing.”

How does endometriosis affect period pain?

“Endometriosis is a chronic inflammatory condition where tissue resembling the lining of the uterus is found in other areas it shouldn’t be,” says Henry. “Because of this, endometriosis can cause severely painful periods, or sometimes increases the length of periods.” Other symptoms of endometriosis include infertility, tiredness, pain during intercourse or painful bowel movements.

“It can be hard to diagnose endometriosis for reasons at the healthcare provider, system and biological level,” explains Henry. “If you are suffering these symptoms and they are having an impact on your social, personal and mental wellbeing, please seek care and advocate for yourself for a specialist gynaecology appointment. The Endometriosis New Zealand website is fantastic for getting a better idea of what’s normal and what is abnormal.”

This all sounds quite annoying. Why doesn’t the body just reabsorb the blood?

“This is a really, really, interesting question because most mammals don’t actually have a menstrual cycle, they have what is called an estrous cycle,” says Girling. During an estrous cycle, the endometrium (lining) remodels for a possible pregnancy, but doesn’t have the same tissue breakdown AKA the bleeding.

Wait, so you’re telling me that other animals don’t have periods like we do?

“Humans are actually extremely unusual in having a menstrual cycle.” Girling explains. “Only some of the other primates, like chimpanzees and gorillas, also have menstrual cycles.” Along with primates, there are a few species of bat, the elephant shrew and the spiny mouse who also menstruate. All we can say for sure is: this brings a whole new meaning to the term mouse pad.