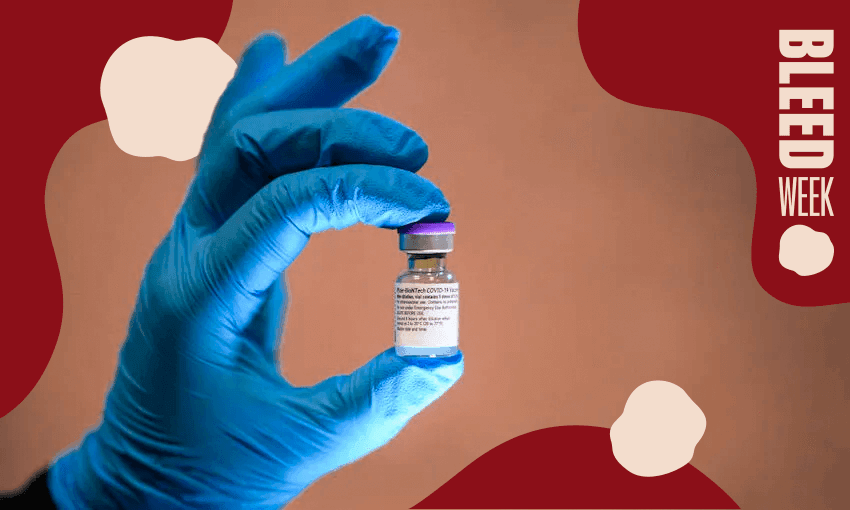 Covid-19 and vaccinations have both shown to affect menstruation, but there’s a real lack of interest in studying it, writes Siouxsie Wiles.

As soon as the Covid-19 vaccines started rolling out overseas, people began posting on social media that they were experiencing changes in their periods. Some were bleeding early, others late. Some had a heavier flow, others a lighter one.

Medical experts were quick to say it was probably nothing, while the anti-vaxxer wellness influencers and disinformation agents used these anecdotes to spread fear about the safety of the vaccines. All we really knew at that point was that those designing and running the clinical trials hadn’t included any questions about whether people experienced changes to their menstrual cycle or bleeding in the days/weeks/months after they were vaccinated. It’s hardly surprising. Menstrual-related conditions and women’s health, not to mention trans and non-binary peoples’ health, have long been neglected by doctors, researchers and the funders of medical research.

So, more than two years into the pandemic, what do we now know about the impact of Covid-19 infections and vaccines on periods?

Before I answer that question, let’s do a quick menstruation 101. Menstruation is the shedding of the uterus lining if someone doesn’t get pregnant. It happens on a roughly monthly basis, but the number of days people bleed each cycle, how heavily they bleed and the length of their actual cycle, varies between people. It can even vary in the same person over time. The menstrual cycle is controlled by a mixture of hormones regulated by the hypothalamus, pituitary gland, and ovaries, also known as the HPG axis (the G stands for gonadal if you’re curious). Anything that impacts the body and disrupts the HPG axis can impact a person’s menstrual cycle. Stress, heavy exercise and extreme dieting are all known menstrual cycle disruptors.

In April 2021, Dr Kate Clancy, Dr Katharine Lee and their colleagues launched a survey using social media asking people to report their experiences of menstrual bleeding after getting a Covid-19 vaccine. They’ve just published the results from their first three months of data collection. They excluded people who’d had Covid-19 because of its potential impact on menstruation. We’ll get to that later. They also excluded anyone 45-55 years old because they didn’t want menstrual changes related to perimenopause to confound their results. That left them with data from over 39,000 people.

So, what did they find? Of those people who normally had a period, 42.1% reported a heavier flow after being vaccinated. A similar proportion, 43.6%, reported no change. The results are similar to a smaller Norwegian study of 5,688 women aged 18-30 years which also found heavier bleeding to be common after vaccination. In Lee and Clancy’s study, those who experienced heavier bleeding were more likely to be older, Hispanic/Latinx, have experienced fever and/or fatigue after being vaccinated, have a lighter typical menstrual flow, have been pregnant and/or have given birth. People with endometriosis, menorrhagia (bleeding for more than a week), fibroids, and polycystic ovary syndrome (PCOS) were also slightly more likely to experience heavier bleeding.

Another study took advantage of an existing dataset from a menstrual cycle tracking app to look at whether vaccination impacted the timing of people’s menstrual cycles. Of the 3,959 people in the study, 2,403 of them were vaccinated. The data showed that having their first vaccine dose didn’t change the timing of their next period, but the second dose delayed it by half a day on average. For the people most affected, their cycle length changed by as much as 8 days, which is considered clinically significant. The good news is that cycle lengths returned to normal two cycles after vaccination.

I think one of the most important aspects of the new study by Lee and Clancy and colleagues is that they also included people who didn’t normally have a period, either because they’ve been through menopause, use long-acting reversible contraceptives/continuous hormonal contraceptives, or receive gender-affirming treatment that suppresses menstruation. Many of these people experienced breakthrough bleeding after being vaccinated. As the authors point out in their discussion, not only can break-through bleeding cause unnecessary concern (unexplained vaginal bleeding is a symptom of uterine cancer in postmenopausal people), it can also have potentially life-threatening consequences. For example, unexpected bleeding can be psychologically distressing for people who experience gender dysphoria. And thanks to all the bathroom hysteria and anti-trans hatred currently being stoked, finding themselves unexpectedly bleeding while out in public has the potential to put some trans people in real physical danger.

What’s also interesting is that it turns out that menstrual cycle disruptions are likely nothing to do with the Covid-19 vaccine specifically and everything to do with just getting vaccinated. Back in 1913, Dr Albert Lamb from the Presbyterian Hospital in New York published a paper on the effects of the typhoid vaccine on menstruation in nurses at his hospital. He noted missed, late and heavier periods in vaccinated nurses. He also wrote: “Where these irregularities occur the patients are more apt to have associated with them a more troublesome general reaction.” More recently, in 2018, a Japanese study of the human papillomavirus (HPV) vaccine found vaccination was associated with an increased risk of irregular menstruation and what they called an “abnormal” amount of menstrual bleeding.

In other words, unsurprisingly, stimulating the immune system can temporarily disrupt the menstrual cycle. And as Dr Lamb noted, the bigger the immune response stimulated by the vaccine, the more likely the disruption.

So, what about getting Covid-19? What impact does that have on menstruation? Well, despite more than 500 million confirmed cases of Covid-19 having been reported worldwide, there is almost no data on that.

Several studies have looked at menstruation during the pandemic but not at infection specifically. For example, one study looked at the data for 1,159 women from 15 countries who recorded their menstrual cycles during 2019 and 2020 using the fertility tracker Daysy. The researchers found that on average menstrual cycles lengthened after the pandemic began. But it appears the researchers didn’t have information on whether any of the women experienced a Covid-19 infection, so the study doesn’t tell us much. It’s a similar story with a study of users of the Natural Cycles app.  Meanwhile, a study of 263 people surveyed in May 2020 about the length of their periods, their pad use, and their anxiety. Nothing about a Covid-19 infection.

Of the studies that have looked at people with Covid-19, one was about 158 female patients in an isolation ward in Jakarta and found that more than a third reported heavy bleeding and menstrual irregularities. They also found that patients with symptoms of mental health disorders were twice as likely to report a menstrual change. Another looked at 177 confirmed Covid-19 patients hospitalised in China and found that 25% experienced changes in the amount they bled and 28% experienced changes in the length of their cycle.

Those were all hospital patients, so are likely to have been severely ill. What about non-hospitalised Covid-19 cases? Well, there’s a report of 127 people who are part of Arizona’s CoVHORT study which found that 16% experienced changes in their menstrual cycle. The most reported changes were irregular or infrequent periods and an increase in premenstrual symptoms. Compared with Covid-19 cases that didn’t report any changes to their periods, those that did were more likely to report having experienced more Covid-19 symptoms, including fatigue, body aches and pains, and shortness of breath. The latest study I can find is from a long Covid study of 3,762 people published last year. Interestingly, they found that many of their participants reported experiencing relapses of symptoms during or before menstruation, something that’s been reported for people with chronic fatigue syndrome.

I think we can safely say that the (published) data on the impact of Covid-19 infection on periods/the menstrual cycle is woefully lacking right now. Anyone who works in women’s health, beyond breast cancer, won’t be at all surprised. Before the pandemic, I got interested in what studies had been done on menstrual cups and was shocked to find almost nothing. This is par for the course when it comes to the health of people without penises and frankly, we should all be up in arms.

Beyond vaccination and infection, just the fact we are in a pandemic will be impacting people’s menstrual cycles. Increased stress, drinking… If you want to read more on this topic, there’s a good review article in the International Journal of Epidemiology that was published open access (so no paywall, yay!) in December 2021. Dr Gemma Sharp and colleagues have reviewed what’s been published so far and summarised the outstanding research questions. Questions like, might catching Covid-19 as a kid impact when your period starts? Are people more or less susceptible to infection at different stages of their menstrual cycle? And does hormonal therapy or contraception have an influence on Covid-19 symptoms?

Here’s hoping people are managing to get some funding to find out! Or maybe it’ll be like a lot of the long Covid studies, and we’ll have to crowdfund it ourselves.