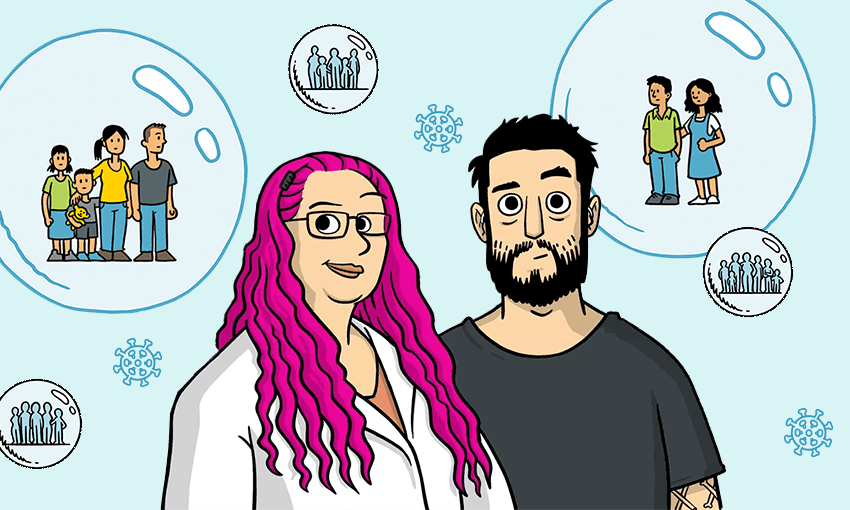 The Spinoff’s Toby Morris has been awarded the Prime Minister’s Science Communication Prize in recognition of his work with Dr Siouxsie Wiles through the Covid-19 pandemic. Here’s how their collaboration started, and how far it’s gone.

Last week, a stranger came up and thanked me for my efforts communicating the science of the pandemic. They became quite teary as they credited the work Toby Morris and I have done together with saving their mother’s life.

As the very recognisable face of our collaboration, this happens to me quite a lot. It’s a very humbling and emotional experience. As a scientist, I’ve always hoped I would be able to make a difference in the world. I obviously assumed that if I did, it would be through my research. Working with Toby has shown me that I can have an impact not just by doing science, but by communicating it. And it’s not just people here in New Zealand who want to say thanks. Because our work has been adapted, translated and shared globally, my inbox is full of emails from grateful people all around the world.

Today, Toby was awarded the 2021 Prime Minister’s Science Communication Prize, and it couldn’t have gone to a more deserving person. I’m thrilled to bits. Now maybe he’ll be recognised in the street for the lives he has saved too!

People often ask how our collaboration started and what made it so successful. Back in late February 2020, I saw a tweet by Dr Drew Harris explaining how using public health measures to slow down transmission of Covid-19 and “flatten the curve” could be “the difference between finding an ICU bed and ventilator or being treated in the parking lot tent”. I immediately knew the message needed to be shared far and wide, but what struck me about Drew’s graphic was that it didn’t show how we could help “flatten the curve”.

While we’d never met, as a long-time admirer of Toby’s work, I knew he would be able to communicate the importance of our attitudes and actions in helping deal with the pandemic. A few hours after asking The Spinoff editor at the time, Toby Manhire, if he thought Toby would be interested in working with me, we were on the phone. A few days later, we shared our revamped version of Flatten the Curve under a creative commons licence.

I don’t think either of us were prepared for how successful that graphic would be. It was seen by millions on social media. The Washington Post, Buzzfeed and Wired shared it. NBC News called it “the defining chart of the coronavirus”. Our prime minister even held it up at a national press conference.

Almost immediately we started work on another graphic. This one was to explain the elimination strategy. And then we just kept going. I’ve lost count of how many we’ve done, but we’ve covered everything from masks, vaccines and contact tracing to genome sequencing and new variants. I’ll be forever grateful to The Spinoff for investing in our partnership.

I’m still blown away by the fact that our work has been seen by millions of people all around the world. It has been adapted and translated by governments and organisations and appeared in the V&A Museum in Dundee, Scotland as part of its exhibition Now Accepting Contactless. It even led to Toby and The Spinoff’s sister agency Daylight working with the World Health Organisation.

As for what makes our collaboration work? We’re two people who share similar values and respect each other’s skills and expertise. My job is to explain the science to Toby, a skill I’ve learned from years of tweeting, blogging and working with artists and illustrators on everything from animations about fireflies to glowing bacterial art exhibitions. Toby’s job is to visually communicate that science to a wider audience, a skill that’s seen him win several awards over the years.

I’ll always wish the pandemic hadn’t happened. But I’ll always be grateful that it brought Toby and me together, for what’s been the most important, productive and impactful collaboration of my career.