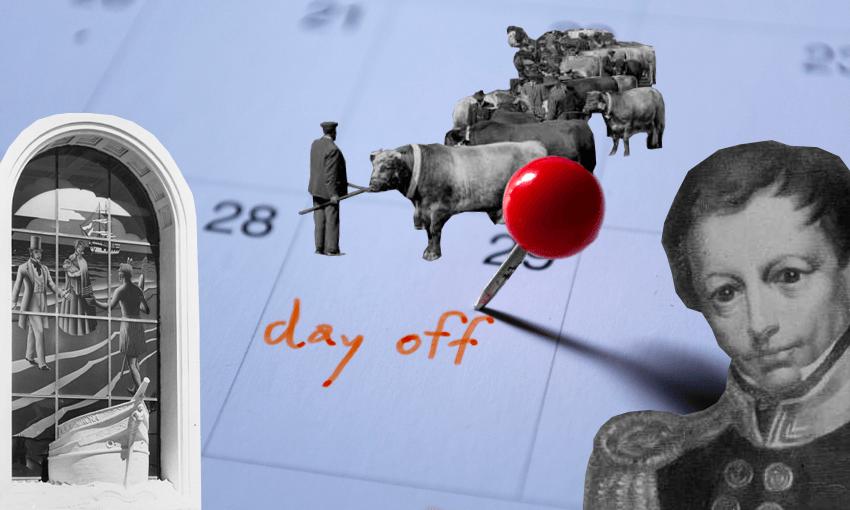 An early ship to arrive in Wellington; an A&P show; and William Hobson – a selection of what our anniversaries commemorate (Photos: Alexander Turnbull Library/Getty Images/Tina Tiller)

Why NZ’s outdated regional anniversaries should be ditched

An early ship to arrive in Wellington; an A&P show; and William Hobson – a selection of what our anniversaries commemorate (Photos: Alexander Turnbull Library/Getty Images/Tina Tiller)

Most of them commemorate early Pākehā arrival. Some are based on obsolete provincial borders. One celebrates an A&P show. But most importantly, none of them have any meaning to the vast majority of us, writes historian André Brett.

Last Monday, January 25, was the Wellington Anniversary Day public holiday. Today, residents of Auckland, Buller, Nelson, and Northland get a day off – and “Auckland” means the Bay of Plenty, Gisborne, Waikato, and even the very northern tips of Hawke’s Bay and Manawatū-Whanganui. What is going on here?

Many New Zealanders have no idea what their anniversary day commemorates, or only a general notion that it is to do with Pākehā colonisation, perhaps a first ship of settlers from Britain. Laments that regional holidays are meaningless or inconvenient are common; some people wonder if we should have a consistent national holiday instead.

Let’s have a look at why we celebrate these anniversaries. Once we know their origin, it’s easier to say whether we should choose a new, possibly national, occasion.

New Zealand once had a system of provincial governments similar to those in Canada or the states that comprise Australia. It’s where our whole “provinces” thing comes from and we still use the word despite having regional and territorial authorities. The days are officially “regional anniversary days” but that doesn’t stop people calling them provincial anniversaries.

The provinces existed from 1853 to 1876 and the holidays generally follow their historic borders. Auckland’s anniversary is marked so widely because the province encompassed the upper North Island. There were 10 provinces and the government recognises 14 anniversary days: one extra is for the Chatham Islands; the other three are notable provincial subdivisions.

So, you might think the anniversaries relate to provincial history. Perhaps when the governor proclaimed a province’s existence? Maybe the first elections or the day a province’s council first met?

In most cases, you would be mistaken.

That said, with one exception, anniversary days mark specific events. Instead of being held on the exact date, the holidays are Mondayised or held on another convenient day such as Easter Tuesday.

Eight anniversary days commemorate an early Pākehā arrival that predates the provinces. Five of them – Buller, Nelson, Otago, Taranaki, and Wellington – mark the landing of the first(-ish) ship of settlers. It was not always very first; in Wellington, an advance party arrived on the Tory in September 1839, but the anniversary is for the Aurora on January 22, 1840.

Buller and Nelson share a ship because Buller was in Nelson Province. Its original designation “Nelson South-West” is all but forgotten and it’s hard to see what the Fifeshire’s arrival at Nelson on 1 February 1842 has to do with Westport or Karamea today.

Some websites say that Otago’s holiday commemorates the establishment of its provincial government. They claim this happened on March 23, 1852. This is unambiguously false, not least because the act creating the provinces did not pass Britain’s parliament until later in 1852. Governor George Grey proclaimed it on January 17 1853, Otago held inaugural elections in September, and its provincial council first sat on December 30 1853. The anniversary is for the ship John Wickliffe landing at Port Chalmers on March 23 1848.

Speaking of governors, Auckland’s anniversary marks the arrival of New Zealand’s first, William Hobson, at the Bay of Islands on January 29, 1840. He proclaimed his commission from Queen Victoria the next day; two years later, plans were made to mark this anniversary. January 30, 1842 was a Sunday, so the holiday was held on Saturday, a workday back then (the word “weekend” was unknown). The 29th stuck as the date.

Northland shares this holiday with Auckland but knows it as Northland Anniversary Day. Fair enough, as the events happened there, though it was never a province separate from Auckland. The rest of the historic province continues to call it Auckland Anniversary Day. In the early 20th century, ambitious Aucklanders suggested it be a national day. People elsewhere, predictably, said no. Some Aucklanders today might also prefer celebrating something different.

There is one other day in this category: Chatham Islands Anniversary Day. It marks William Broughton and his crew on the Chatham becoming the first Europeans to see the archipelago that Moriori call Rēkohu. This occurred on November 29, 1791, the oldest event commemorated by an anniversary holiday.

Canterbury goes its own way

One province moved on from its colonial anniversary long ago. Canterbury’s holiday once celebrated the arrival of settlers on December 16, 1850, when the leading two of the First Four Ships reached Lyttelton.

During the 1950s, this holiday became the second Friday after the first Tuesday of November – People’s Day at the Canterbury A&P Show. It’s the only anniversary not based on a historic event.

South Cantabrians hold their holiday earlier. It’s the most curious anniversary: it marks September 26, 1907, Dominion Day, when prime minister Joseph Ward read the proclamation granting New Zealand dominion status. I will spare you a detour down our twisted and ambiguous path to independence, but this proclamation meant New Zealand was no longer a colony of Britain.

That leaves four provincial anniversaries, and guess what? They really do mark the creation of provinces.

When the provincial system began, there were six provinces, based on the main sites of Pākehā settlement. Pākehā rapidly occupied more land, and new towns chafed under the control of often-uninterested governments in distant capitals. Four regions obtained provincial status.

An order-in-council on March 25, 1861 separated Southland from Otago. This is the basis for the anniversary day, even though – or perhaps because – the order took effect on April 1. When the province went bankrupt a few years later, humourists riffed on that inauspicious date.

Last is Westland. The border between Nelson and Canterbury was the Grey River. That’s right, Cobden was in Nelson and Greymouth in Canterbury. When the 1860s gold rush began, it was obvious Christchurch could not administer Westland; the Southern Alps were such an insuperable barrier that Westland was more an outpost of Melbourne.

The central government in 1868 made Westland an autonomous county, responsible for its own administration, but that’s not the anniversary day’s origin. Westland gained provincial status, with full legislative powers, on December 1, 1873. That’s why Greymouth and Hokitika had a holiday late last year while Westport, ex-Nelson Province, has one next week.

The anniversary days are a patchwork of holidays for first ships, orders-in-council, A&P shows, and more. South Canterbury’s day does not mark the anniversary of anything specific to that region. Auckland celebrates an event that occurred in Northland.

Some holidays have origins more relevant to one city than a whole region. Ōamaru or Queenstown are probably in no hurry to heartily cheer a ship’s arrival at Port Chalmers, nor would the memory of one entering Wellington Harbour quicken many pulses in Palmerston North.

We can do better. Some of these days mark political events that, although important, no longer merit a holiday, especially as we lack holidays for more famous political milestones that form part of our national identity, such as Suffrage Day (September 19).

Moreover, the premises of the anniversary days are fraught. They usually disregard centuries of Māori history before colonisation, originating as Pākehā celebrations of Pākehā achievements, which ignored or elided local iwi.

New Zealand is fortunate that anniversary days are not fodder for an unedifying culture war, and I do not mean to provoke one. It’s simply unnecessary: whatever your views on the events that anniversary days commemorate, they have faded from popular consciousness. Anniversary days mean rest and relaxation, not heated protest or laudatory oration about dead Pākehā men.

Any holiday is welcome, but the ones we really like and anticipate have a meaning deeper than “cool, I can sleep in”. Since the origins of our anniversary days have lost their lustre and become obscure, let’s observe something significant for our communities today.

We can either revise the anniversary days to better celebrate our regions or replace them with a new national holiday. There are good arguments for both.

A national holiday provides consistency. No longer will you arrive in Invercargill ravenous for lunch, as I did in 2016, and be frustrated to find almost everywhere shut. You won’t phone a business in Auckland about some urgent matter and get their answerphone.

If we take this option, the proposed Matariki public holiday could replace anniversary days. But we should make Matariki a holiday anyway – New Zealand has fewer days off than many countries – and choose something else. The aforementioned Suffrage Day is one option of many. I suspect, though, few people will rush to revive Dominion Day.

Good arguments also exist for retaining regionally specific holidays. People are proud of their regions and the communities they have formed. These merit celebration, especially if we align holidays closer to present boundaries.

Regional days need not be based on historic events. Canterbury’s Show Day is a good example, mirroring a practice common in Australia. For some regions, pivotal moments might be too sombre for a day meant to be light and fun. Regions can choose new days that celebrate local people and produce, community and culture.

Anniversary days are vestiges of occasions now disregarded and obscure. Let’s replace them with something positive and relevant for today.