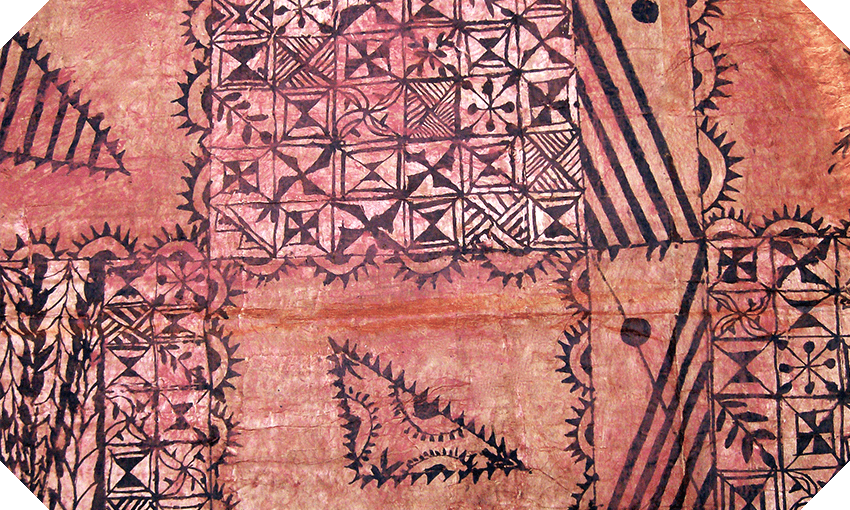 Some traditional practices have faded, but tapa-making is on the rise again, writes Taualofa Totua.

When I was eight, I pressed my fingers over the dark panel of wood that leaned against our family television cabinet. The brown panel was tall and slim. It was out of place in our sitting room, because it had no purpose. Unlike the photo frames that lined the walls, or the spotless material couch covers, it stood there awkwardly. If it was supposed to be art, it looked unfinished, desperate for a splash of colour. There were perfect Sāmoan patterns carved into the wood. Plant motifs. During family prayers, I would imprint the designs by memory, tracing frangipani and lauti leaves on my thigh with my fingers over and over. It wasn’t until I studied Pacific Studies when I was 19, that I learned the Samoan name and purpose of such panels. ‘Upeti fala, a design board used to print stories and images onto siapo or bark cloth.

Due to colonialism, tapa-making as practice dwindled in several Pacific islands. Cheap, imported fabric and the widespread migration of communities meant that the practice was no longer valued in the same way. Now, a resurgence of tapa-making is happening here in Aotearoa. There are as many processes as there are names: Ngatu, siapo, hiapo and Māori aute. Each is unique to different Pacific cultures, with separations in texture, colour and design. I’m in awe of this beautiful practice because, like most Indigenous forms of storytelling all over the world, it involves working with the earth. Tapa-making is continuing to grow, thanks to teachers who share – like Auckland-based artists and Sāmoan tapa makers Jasmine Tuia and Doron Semu. These makers are redefining what the cloth means to us, adding to the tangible ways we as Pasifika diaspora can feel connected to our culture. I went along to their community workshop with some friends to learn how the cloth is made.

My first Pasifika tapa workshop was held in Avondale, at the welcoming space of All Goods on Rosebank Road. Laid out on the floor were colourful mats and in the corner, a trestle table was piled with Sāmoan coconut bread and pineapple pies. I rolled up to the workshop late, (not in a fashionable way, more like an island time, hour-late way). My friend and I were called into the circle by a smiling Semu. We slipped off our shoes and joined the 15 or so tapa students of varying age, gender and ethnicity on the floor. I was surprised to see a few males present as, traditionally, tapa is widely considered the women’s domain. Semu’s story, as a proud queer person, showed me how wrong I was. His demeanour was almost challenging when he said, “ I claimed it”.  Semu stepped into his birth right in 2019. He travelled to Sāmoa, where he watched Faapito Lesatele, a respected siapo maker. “I turned up on her doorstep, willing to learn, and I was there for three weeks after,” Semu said. “I’ve been going back ever since, learning about tools and the process too.”

Unlike entitled foreign visitors who historically have been ignorant of Sāmoa’s traditions and practices, Semu has looked after his relationship with Lesatele and thus the cultural knowledge he has gleaned from her. Wanting to practice siapo has been a way for Semu to learn more about his Sāmoan heritage. Now an expert, Semu has hosted a range of workshops; including tailored ones for MVPFAFF queer youth, and was hosted by Te Papa Musuem last weekend. At our workshop, he pointed out the scars on a piece of bark, a sign that branches had been pulled off during the tree’s life. Semu advised that the wooden tools used to shape and form the cloth must have matching wood, for example a pine anvil and a pine mallet.  “Otherwise the tapa cloth will not spread nicely. There are different densities for each wood type.”

For two hours, we observed Semu make tapa. We smelled the wet bark and touched the soft material of the tapa pieces he’d prepared earlier. We watched as a small mulberry branch became cloth. We scored branches, peeled bark, soaked pieces in water and scraped with shells – a technique specific to Sāmoan tapa-making. Semu encouraged us to experiment using an assortment of coloured flower petals, beaten into our widening tapa cloths. It felt magical and oddly familiar to touch the material and tools.

Our tapa making group naturally ended up splitting into two. Some of the others migrated to the mountain of coloured threads on the other side of the room. Jasmine Tuia sat with her legs folded, holding a needle and thread.  Her tattooed fingers demonstrated to us how to embroider onto tapa. Tuia returned to the practice of siapo as a student at the Elam School of Fine Arts. She grew up in Sāmoa, where it was not as popular to see siapo as it was to see the different woven mats found. Her artwork is empowered by many influences. From everyday conversations to Pacific body politics, and Sāmoan land cases in her home village of Matautu Lefaga. Tuia has said that tapa-making highlights the voice of women as cultural carriers of knowledge. It’s a shift from the exclusivity of titles like “cultural guardians” or “knowledge protectors”, as more and more Pasifika embark on a path of sustaining practices.

At All Goods, I worked on my tapa pieces until I was the only one still by Semu’s side. Each hit of the mallet became more precise and even, a task that demanded a lot more than I had anticipated. Guided by Semu, I found a groove and eventually placed my tapa cloth onto the window to dry with everyone else’s. I had added two scarlet hibiscus petals onto the cloth, which, thanks to my earnest beating, had widened significantly from the sliver of bark peeled from a branch. I felt an overwhelming sense of pride – for myself, my friends and everyone else there that day. Grateful, we passed contact details between ourselves, buzzing and excited to take our new learning back to our families.

When I was 18 years old, I felt the touch of bark cloth on my skin for the first time. The material wasn’t stiff like I had imagined. It had been beaten till it was supple, and felt like a second skin, massaged gently with gardenia oil. Brought out from under my Nana’s mattress and unfolded gently, the cloth was part of a design process: my taupou traditional dress. We opted for an ie’toga mat over the siapo in the end.

Tapa would appear to me at special moments; through a goodbye exchange gift, on a wall at a memorable exhibition and online thanks to a wave of contemporary makers, Sāmoan and non-Sāmoan. It wasn’t until a Saturday in June, 2022 that I finally learned the Sāmoan way to make the cloth my Tongan great-grandmother used to make. The same cloth made from mulberry trees my grandpa and his brothers would cut down for her. Banging echoes of the wooden tapa beater, meeting the wooden log or tutua, would sound through the village, signalling women at work. At my first tapa workshop, the same banging resonated at the All Goods space – this time including women, men and gender diverse individuals.

Semu, my first tapa teacher, is hopeful. “My dream is that we have a community of tapa makers claiming it as their own.”

Taualofa Totua is a cadet in the Next Page cadetship programme, public interest journalism funded through NZ On Air. She will be working with The Spinoff for four weeks before working with Metro, North & South, New Zealand Geographic and Pantograph Punch.