The Royal Commission into the Christchurch attack has made 44 recommendations, including a sweeping overhaul and expansion of New Zealand’s national security state. Justin Giovannetti reports from parliament.

New Zealand’s security services knew almost nothing about the the terrorist’s intentions before the Christchurch attack and could have done very little to stop him, the long-awaited Royal Commission of Inquiry has concluded.

The prime minister, police commissioner and director-general of the Security Intelligence Service apologised this morning at parliament for the failings highlighted in the report. The immediate failings for the 2019 attack in Christchurch were few, but the need for changes going forward is great, the inquiry found.

Balancing the enlarged security state is a call for more to be done to encourage diversity. The inquiry recommends a new ministry of ethnic communities, to focus on increasing the country’s social cohesion. That would be accompanied by a series of legislated changed to hate-crimes, more police training around firearms licensing and a way for the public to tell security agencies about things that concern them.

The report’s authors said that one thought that kept returning to them as they wrote the document was the need for New Zealand “to confront and engage openly with hard issues”. The inquiry said there has been limited public or political appetite in recent years to discussing firearms licensing, counterterrorism, social cohesion and diversity. 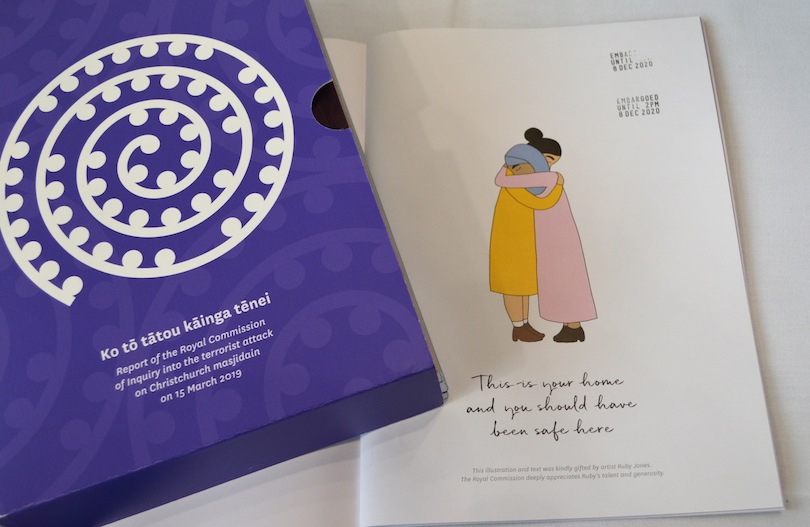 Speaking with reporters just before the report’s public release, prime minister Jacinda Ardern said that her government has decided to adopt all 44 of the inquiry’s recommendations.

“On behalf of the government, I apologise,” said Ardern, speaking at the banquet hall in the Beehive. “An apology would be hollow without action,” she added.

The prime minister highlighted the two failings in the inquiry: that the firearms licensing regime provided the terrorist with weapons, as well as the failure of the security and intelligence agencies to focus on far-right extremism. The inquiry found an “inappropriate concentration of resources” on Islamic extremism to the detriment of other investigations. However in both cases, the inquiry found that fixing those failings would not have stopped the attack.

Ardern said that all the recommendations are “a significant work programme to make New Zealand safer, and I hope, a more cohesive country”.

Cabinet has put Andrew Little in charge of implementing the report. Little, a past minister of justice, is currently the minister responsible for the country’s intelligence agencies. She said he has the experience to see through the changes.

While some recommendations will be acted on quickly, including the new ethnic communities ministry and legal changes to hate laws, others will take time.

Before she spoke with reporters, Ardern’s office and other senior ministers provided reporters with a series of press release responding to the inquiry report. They made nearly no reference to the significant overhaul of the national security apparatus called for by the inquiry. The prime minister said in response to questions from reporters about the omission that she accepted the recommendations. She said the new intelligence agency will need significant consultation before it can be announced.

The review only mention’s the terrorist’s name once, in the executive summary. Over the course of over 800 pages, split between seven booklets, it isn’t mentioned again.

American social media giants will also be getting a call from the prime minister. According to the terrorist’s testimony in the report, he said that YouTube was a more significant source of information and inspiration for him than far right sites. Ardern said she’ll bring that up with the leadership at YouTube.

New Zealand police commissioner Andrew Coster reflected that the only information that should have warned government of the looming attack, according to the inquiry, was an email sent by the terrorist to parliament only eight minutes before he struck. The review found that parliamentary staff did the right thing that day, when they read the email and promptly forwarded it to police. However, that attack was already underway at that point.

Coster said that more training, resources, and a new approvals process in police for firearms licensing was already underway and has improved a situation that needed change. Police were aware of gaps in semi-automatic firearms before the attack and were working on it, he said. But it was too little, too late.

“Families and victims will have a number of unanswered questions” in terms of the police response to the attack, he said. The police will release their review of the attack tomorrow.

One of the report’s conclusions is that the country’s security services are not the all-powerful agencies some people think they are. Instead, it described New Zealand’s intelligence and security services as “fragile” with limited capability and little social licence.

The director-general of the New Zealand Security Intelligence Service apologised for her agency’s failure to make people in the Muslim community feel comfortable. “I know that some people with whom NZSIS has engaged felt that they were under suspicion or were of security concern when that was not so,” Rebecca Kitteridge said. The muslim community is not being monitored, she added.

A declassified internal SIS review of the attack was also released by the government, along with the inquiry’s report. After what it described as the most forensic search of the security service’s records in history, informed by post-attack national and international investigations, that review concluded that all it had on the terrorist were his movements into and out of New Zealand.

The most important question, according to the security service, was what should it have known about the man. The SIS review found that the terrorist “took deliberate and effective steps to conceal his plans and such weak signals would have been difficult for any security service to detect”.

According to the spy agency, the only possible way SIS could have discovered the terrorist’s plans in advance was if it had gained a warrant and hacked his computer and emails to acquire a copy of his manifesto. However, in the review, SIS found that it would not have met the threshold for a warrant even if it had received a lead in the case and known what to look for.

Many of the issues raised in the Royal Commission’s inquiry were years or decades in the making, according to Ardern, spanning a number of different governments. “The time has come for us now to fix it,” she said.