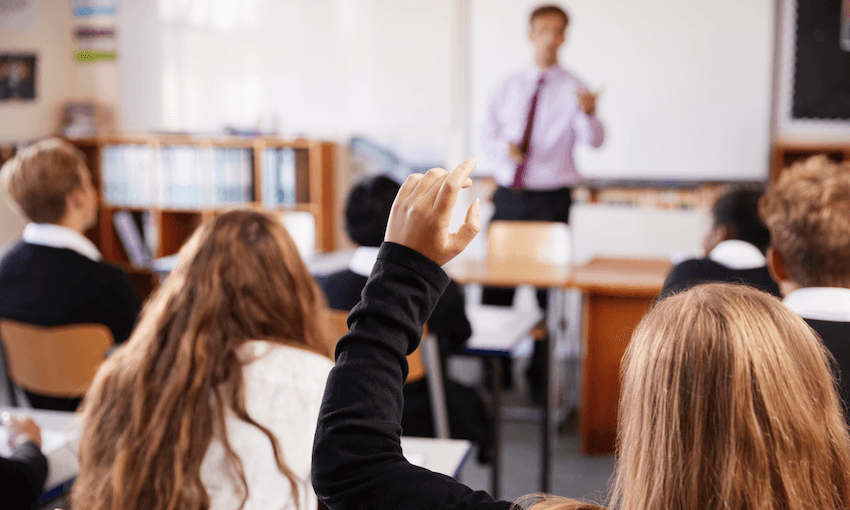 British kids are being taught some very dodgy things about Aotearoa

Ahead of Waitangi Day, UK schools and education companies tried to engage with Māori culture. But a string of examples, ranging from ignorant cultural appropriation to harmful and inaccurate depictions of history, show colonial attitudes remain entrenched.

After 200 years, Aotearoa is finally incorporating what’s hoped to be a more accurate and nuanced teaching of its history. One that includes the early wars, Te Tiriti o Waitangi, and the impact of colonisation.

But back in old Blighty, it seems the British just can’t leave behind imperialist attitudes.

When working as a relief teacher, London-based New Zealander Nicole Reeve was upset to hear her students refer to Māori as “savages” and “cavemen”, suggesting colonial attitudes are baked into the system, and reinforced in children from a young age.

Reeve was asked to take a history lesson on the British empire, for children aged 11 to 13. A two-page spread in the history textbook covered British colonisation, but focused on the 1840 signing of Te Tiriti o Waitangi.

Next to a depiction of the signing, the Treaty was reduced to two sentences: “The Maori tribesmen are signing over their land to the British. They are exchanging their whole country – New Zealand – for guns and alcohol!”

These types of comments negate attempts to teach children about the impacts of colonisation, and reinforce a sense of British superiority – one Reeve noticed among her students and colleagues. “Is it ignorance? Or lack of understanding of the impact of colonisation?”

Meanwhile, the nationwide Covid-19 lockdown may have hit pause on the tradition of London-based New Zealanders marking the signing of Te Tiriti o Waitangi with a pub crawl, but Britain found other ignorant and disrespectful ways to note the day.

Ahead of this Waitangi Day, popular UK educational resources company Baker Ross promoted a range of craft ideas to teachers and parents. Among the activities were a “Maori tattoo mask” and “Maori totem pole” – which both bear little resemblance to moko or pouwhenua.

While perhaps well-intentioned, it’s hard to think of a more explicit example of cultural appropriation, being delivered straight into the homes and classrooms of the next generation.

A UK-based New Zealand mother said she did not instantly recognise the Māori design or artwork when she opened the email from Baker Ross.

“There was such a mismatch between what I read and what I saw,” she said. “I just couldn’t quite believe it. It seemed really inappropriate to me. It felt like a misrepresentation of the culture.”

It could have been an opportunity to engage Māori artists to create resources, which could spark meaningful conversations, she said. “Rather than taking content, reproducing it very poorly, for profit that’s not going to be seen by anyone of that culture.”

Baker Ross did not respond to The Spinoff’s request for comment.

Of course, this isn’t contained to a single educational crafts website. Ahead of Waitangi Day, a Berkshire teacher posted on a local community Facebook page asking for ideas to engage with New Zealand culture in the classroom. Other teachers suggested painting moko on the kids’ faces, or getting them to create their own haka.

Learning haka – usually from an All Blacks video – seems a popular choice among British teachers looking to engage with Māori culture. But those who shared their experience of haka taught in classrooms described a process with a lack of understanding of tradition and meaning.

In societies around the world, there is a growing understanding of the impacts of colonisation, and the need to centre indigenous voices. This has been helped by indigenous activism, resistance movements, and Black Lives Matter. But change is slow.

University of Waikato Māori education lecturer Joshua Wetere (Ngāti Hauā, Ngāti Paoa, Ngāti Hikairo) said the decolonisation of the mind alone was a very slow process, and although countries were well on their way, it would likely take more time for resources to catch up.

“When the narrative of a minority is dictated or decided by a majority, it will inevitably result in the deprivation of a peoples self-determination, but also promote self-hate in terms of minority identity,” Wetere said.

“Resources such as these have great potential to create this outcome, but more importantly, create a generation of the uninformed – this should not be the vision for education.”

To move forward, with acceptance and integrity, Wetere said educators needed to feel a sense of rightness within themselves to capture the power of agency to make a difference, or change. This required empathy and emotional intelligence. “Building compassionate and understanding relationships and exposing our vulnerabilities could be a good start.”

Indigenous rights advocate Tina Ngata (Ngāti Porou) said change needed to start with honest self-reflection. Waitangi Day was an opportunity to talk about how Pākehā came to get their rights through Te Tiriti, and whether they had honoured that document.

“When they’re consistently looking at other groups, and erasing their own role, they’re missing the point.”

As one of the most influential global empires, the UK has set in train a series of events that have shaped the structures and dynamics of the world. “So, it’s really incumbent for them to respond to their history, by reflecting on themselves, not by erasing themselves.”

Ngata says there is good work happening, but the rise of the global right didn’t make it easy. She encourages parents and teachers to help children engage in “ethical remembering”.

“Imperialism is a wide-reaching machine that continues to deliver harm across the globe and it’s vital that our future generations be equipped to identify it and take on the challenge of addressing it,” she said.