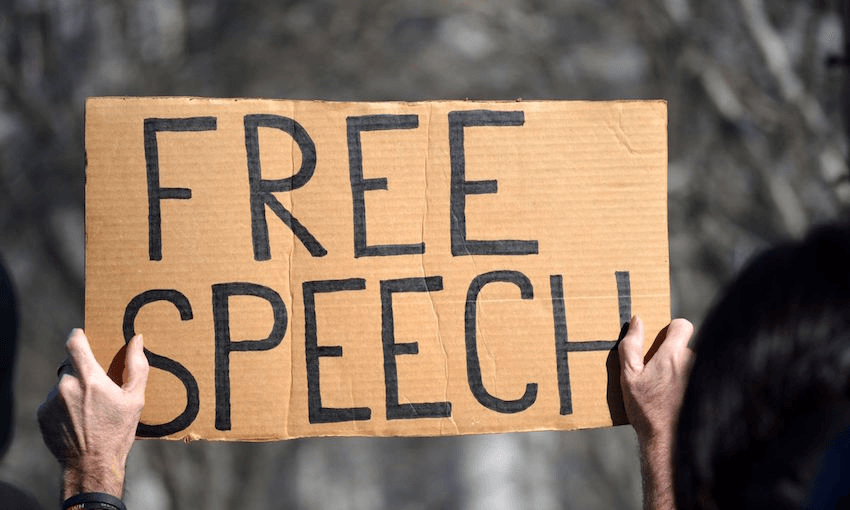 In her second column for The Spinoff, activist Anjum Rahman recounts her experience at a recent media event as a way of examining what’s at stake in the free speech debate.

To receive an invitation to the renowned Hamilton Press Club lunch is quite a thing, given that many media personalities and prominent community members attend. I have to say that it felt good to be invited – I felt seen. More than that, the keynote speaker was the constitutional lawyer Moana Jackson, someone who I’ve admired for many years.

Mr Jackson did, indeed, deliver. In calm, measured tones he talked to us about the history of racism from the time of Greek philosophers to today. He spoke about the US Supreme Court’s doctrine of discovery, and the impact it had on indigenous peoples around the world. He covered colonisation, the myths told as historical fact, the suppression of history, language and culture. He spoke about the racism of the body – the biases and assumptions we make make about outward appearance – and the racism of space, the more insidious form that permeates our institutions and cultural values.

He brought a dry humour as well as his expertise, and it was a pleasure to listen to him.

He wasn’t the only speaker on the day. Hamilton Press Club is creation of the writer Steve Braunias, who was also our host and MC for the event, and took the opportunity to give us a couple of addresses. He was lovely on various things around Māori and people of colour (POC). But before we got to hear Mr Jackson, we were told – almost told off – for our potential lack of willingness to listen to the two Canadian provocateurs who visited New Zealand last year, had they been invited to the 2018 Hamilton Press Club lunch.

We, the POC in the room, apparently should have sat and listened to those two professional attention-seekers abuse us and then given them the dignity of a response, for the purposes of ‘debate’. As if they were interested in debate (refer to my last column – they were only here to make money). As if my humanity is a matter of debate. As if my life isn’t already filled with people talking to me or treating me as if I am less than.

As if the solution to marginalisation is to expect marginalised people to debate those who openly practise hate against us. As if somehow we who have the toughness to live through the racism of space and body – to withstand structural and institutional racism along with the casual barbs of prejudice and bigotry – are somehow too soft, too easily offended, too intolerant even. As if we’re the ones who need our minds opened.

We were told that we should have subjected ourselves to these two clean-cut, presentable white provocateurs, and debated with them. Well, where’s the challenge in that? He might have distinguished himself by suggesting that we should listen to Abu Bakr al Baghdadi (apparently he’s available by video link), and debated him about the rights and wrongs of beheading innocent journalists. Now that would have been a brave position, not one I could respect or agree with, but one that at least showed some originality.

Or he might have defended the free speech rights of the young man jailed (and rightly so) for sharing ISIS propaganda. Apparently that guy’s out on parole now, so presumably available for a debate at the Hamilton Press Club. But no, Mr Braunias followed what the research tells us: that free speech arguments are most often used to defend racist speech. In fact, Mr Jackson referred in his address to New Zealand research showing that free speech arguments were almost always used to defend racist or homophobic speech.

There were many POC in the room, including Māori, and I’m genuinely appreciative of Steve Braunias for achieving this. One thing I’ve found in the wake of the government engagement I’ve been involved with is an increased admiration for the indigenous people of this land. Not that I didn’t have a huge amount of admiration before, but there’s nothing like a shared lived experience to increase the depth of empathy and connection to another.

Our community lost 51 innocent worshippers in March, and I have recounted the difficulty I’ve had interacting with the government. But think of what Māori have gone through over 160 years of engagement with governments that have often been extremely hostile. Dealing with a legal system designed to alienate them from their land in the 19th century, requiring individual title for collectively held tribal lands. Dealing with private businesses keen to load them with debt so that their only option was to settle the debt with transfers of land. Dealing with unrestricted immigration, as the New Zealand Company sent shipload after shipload of foreigners who refused to engage with indigenous culture and traditions.

Forced into an education system that regularly humiliated them and often still does. Incarcerated by a justice system with a clear bias against them. Being constantly portrayed as lazy, unreliable, backwards, uncivilised. Most of all, the straight out violence of the New Zealand Wars, Parihaka and so many other atrocities carried out during the process of colonisation and beyond.

Every day, the current generation of tangata whenua continues the fight for their rights in this country. They keep standing up to challenge the government, to change structures, to gain even token compensation for what was taken from them. It took a long time for them to get any substantial gains. The processes put in place have often worked against them, but still they persist.

They have shown a courage that is inspirational, a resilience that should never have been needed. The rest of us have so much to learn from their history in this country and their wisdom.

They deserve so much better than to be subjected to a debate with white supremacists, a debate that would be impossible to win because even participating means giving up part of their humanity. One of my favourite writers expresses it perfectly:

I found myself in an unexpected free speech debate again recently. It was during an interview that was in a different context and it threw me. The debate I had on Q+A last year about those same two Canadian provocateurs was raised – I can’t escape them if I try.

I think about the actual impacts of being a target of hate speech, the target of an organised campaign to diminish and demean based on identity. The 51 people killed in two mosques in Christchurch. The level of violence around the world, caused by whipped-up hate deliberately fomented. Individuals are harassed and abused until they leave public spaces.

Read this detailed account by Kathy Sierra about the harassment she received. Read this New York Times piece about how YouTube algorithms are serving to radicalise young men. Read this Twitter thread about how Facebook ‘likes’ can lead to a progression from Fox News to pages associated with neo-Nazis.

All of this – all the pain, fear and damage caused by hate speech, all the impacts on the human rights I noted above – is nearly always brushed off in debates about free speech.

It feels like a kick in the guts, rage-inducing and heartbreaking at the same time. If I felt seen by the invitation to Press Club, this was quite the opposite experience: of not being heard. Again.