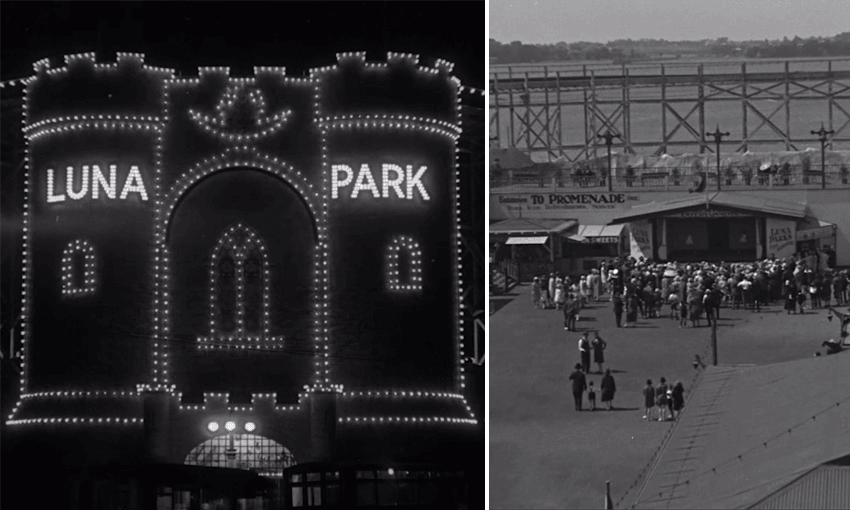 On Auckland’s waterfront more than 90 years ago, thousands of people flocked to our very own Luna Park. Louise Fisher recounts its short, trouble-plagued history.

Long before there was a Disneyland or Six Flags, there was Luna Park in Auckland. Operating from 1926 to 1931, the park’s main attraction was the ‘big dipper’, a gentle wooden rollercoaster that wrapped around the park; there was also a log flume, funhouse, dodgems, arcade and live shows. The park occupied three acres of prime waterfront real estate, but today few Aucklanders even know it existed. It was forgotten as quickly as it appeared.

During the early 1900s, the first modern amusement parks started to emerge. Perhaps the most famous and influential of these was Luna Park in Coney Island, New York, which operated from 1903-1944 and attracted visitors from all over North America. The original Luna Park closed after a fire caused irreparable damage, but replicas and imitations had long since sprung up around the world. There were versions in Berlin, Cairo, Osaka and Melbourne – the Luna Park name and ideals had gone global.

Opening in 1912 (and still standing today), the Melbourne Luna Park was a triumph, bringing great wealth to both the city and its owners. The park garnered international attention and caught the eye of a group of Auckland businessmen, who set up Amusement Park Limited. The plan to bring Luna Park to Auckland was underway.

The group’s first task was to lease land on Auckland’s waterfront to house the park. There was some initial backlash from local council and harbour board members who believed Auckland wasn’t a proper place for a theme park. The Auckland Star reported board member T. Bloodworth’s complaints: “The children of Auckland will grow up in the environment of an amusement park, open on six days of the week. This sort of thing, going on day in and day out, can only be harmful.” Others believed Auckland wasn’t big enough to support a theme park – the population of Auckland in 1926 was just 192,000 – while the park’s supporters maintained it would bring tourists to the city and help Auckland grow. After a few months of deliberation, the bid was accepted for an initial five-year lease.

Construction began in June 1926, with the bulk of the equipment and attractions coming from the New Zealand and South Seas Exhibition World Fair, which had recently been held in Dunedin. Approximately 250 people were hired to work on the construction of the park.

On December 4, 1926, Luna Park Auckland opened its gates to the public for the first time. An estimated 10,000 people visited the park that day, “many of whom were so thrilled that they patronised the railway (rollercoaster) not once, but three or four times”, according to the Auckland Star. The NZ Herald summed up the celebratory mood in a glowing review: “One may have all the thrills of a railway collision, an aeroplane accident, or a parachute descent with no risk what-so-ever … it is all most exhilarating”. The park also held live music performances and entertainment shows every night. With such a successful launch, the park seemed set to follow in the footsteps of its famous namesakes in New York and Melbourne. But things were about to take a turn for the worse.

In February 1927, just three months after it opened, a massive fire destroyed Luna Park’s tea rooms, funhouse and part of the rollercoaster. The NZ Herald reported that “flames flew skywards” as the park burned “like matchwood”. The cost of rebuilding the damaged attractions was an estimated £10,000 (roughly NZ$1 million in today’s money). There are conflicting reports as to when the park reopened after the fire, ranging from the next day to a month later, but when it did reopen, the park was still in disarray. The tea rooms and part of the rollercoaster were in ruins and areas of the park were roped off. Unfortunately for the Luna Park, this was only the start of its problems.

Despite the fire damage, the park remained popular through 1927. Public perception started to shift, however, after December 1927, when a 22-year-old man fell out of the rollercoaster on its incline. He suffered a fractured jaw and shoulder, a dislocated elbow and a severe scalp wound, and was rushed to Auckland hospital for surgery. He recovered, but rumours started to circulate about lack of safety at the park.

Then, a year after the first fire, another fire broke out. In February 1928, what was initially a small blaze quickly grew thanks to the amount of wood in the park. Thankfully, a fire fighting facility had been built on site following the 1927 fire, and this one was extinguished far faster.

The attendance and reputation of the park slowly started to decline through 1928. A month after the second fire, on March 31, 1928, the park announced it would no longer charge admittance, in hopes of attracting more visitors. Luna Park’s only source of revenue was now its coin-operated arcade machines and food and beverage offerings. Attendance numbers went up and the park began to recoup some of its losses. It appeared as though the park had regained a new life.

Appearances can be deceiving, however. While the land lease was halved to £1,000 a year, the park still struggled to stay afloat. The great depression had started to set in and Aucklanders had little disposable income; visiting an amusement park was far from a top priority.

Luna Park closed its gates for good on February 7, 1931, less than five years after it first opened. An estimated 500,000 people had visited the park during its short existence. Not long after its closure, the main attractions were sold and shipped off to Sydney and demolition workers were sent in to dismantle what was left. Soon no trace of Auckland’s first amusement park remained.

The only known film of Luna Park was recorded in 1928. The incredible silent footage above shows riders’ view of the rollercoaster and log flume, as well as a tour of the park. Today, the space is occupied by the Ports Of Auckland, directly across the road from Spark Arena. If you didn’t know the story of Luna Park you’d have no idea there was once a rollercoaster where the cranes and shipping containers of the port now lie.

Editor’s note: An earlier version of this article claimed Luna Park was New Zealand’s first amusement park. That is incorrect – both Dunedin’s Vauxhall Gardens (1862-1871) and Wellington’s Wonderland (1907-1911) were earlier.