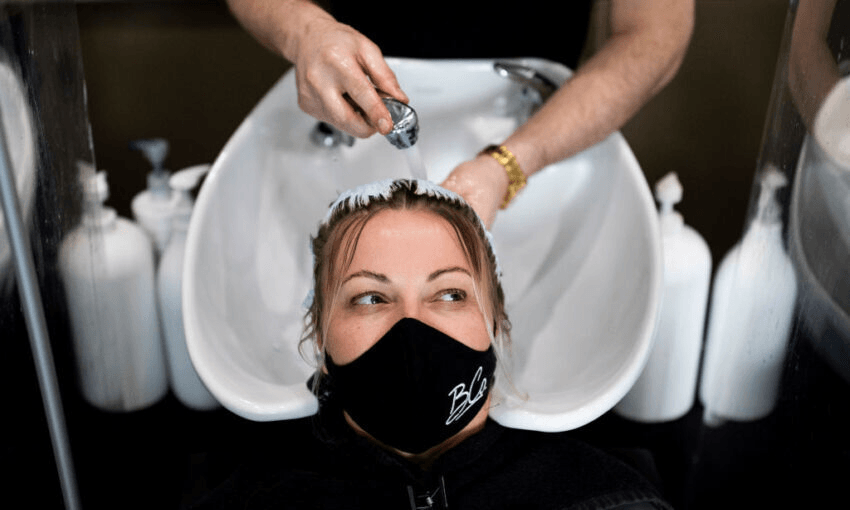 A customer (not Elle) has her hair washed at a salon in Marylebone, London.(Photo by Dan Kitwood/Getty Images)

A customer (not Elle) has her hair washed at a salon in Marylebone, London.(Photo by Dan Kitwood/Getty Images)

People flooded pubs as England celebrated ‘independence day’, but all Elle Hunt wanted was the hairdresser.

As unlikely as it recently seemed – and as unsettling as it still feels – something resembling normal life has begun to resume in London. I first felt it when I realised I was running late for my hairdresser’s appointment, like I have for every hairdresser’s appointment in my adult life. Except, this time, I was running late because I’d forgotten my facemask.

After a four-month closure forced by Covid-19, hair salons were recently allowed to reopen with a major easing of England’s lockdown on July 4 – billed as “Super Saturday” and “Independence Day” in the tabloids. Most of the collective countdown centred on the return of pubs: with some free to open from 6am, the Sun estimated that “gasping punters” would sink 15 million pints nationwide on the first day.

My first priority, however, was a haircut. I’d had an appointment booked in early March, but cancelled it due to the rapidly escalating threat from the coronavirus; lockdown. In the weeks then months that followed, my increasingly dry, damaged ends had seemed of a piece with my low mood and lower levels of personal hygiene.

Where my flatmate and boyfriend turned cutting each other’s hair into a passion project that somehow spanned days, I hung onto the anticipation of an expert trim. Yes, I was afraid of being rebuked by my hairdresser for a home job. But my eventual return to the salon was also a simple pleasure lighting the end of the tunnel: the longer we were in lockdown, the sweeter it would feel to have a few inches taken off the ends.

Soho in London is jammers, mask on and home time for me. Absolute madness pic.twitter.com/5lkkCK3zRa

I was among the first to snag an appointment, a few days after Super Saturday – before I’d even had a pint. After months spent following the news from my flat, the thought of piling into a pub – the collective self-discipline eroding further with every round – made me feel queasy. At the salon, my hairdresser and I would both wear masks for the duration of my appointment. If what the government was saying with Super Saturday was true – that not reopening the economy was now a greater threat than virus – a haircut felt like a relatively gentle re-entry into society.

But on the bus from my home in south London to Shoreditch – only the second time that I had travelled north of the Thames in four months – I was struck by how much the world post-coronavirus resembled, at face value, the one before it. Only about two in five pedestrians we passed were wearing masks. I counted. People were queuing at coffee carts, eating lunch at the tables outside Pret a Manger, sightseeing round Southbank. A sign outside a closed cinema read: “Lights, cameras, hand gel!”

Not for the first time, my thoughts tripped over the disconnect between what I knew to be true – some 50,000 fatalities in the UK, the worst death toll in Europe – and how little it was acknowledged in my surroundings. When even keeping at least two metres apart seemed wildly open to interpretation (the official advice now being, in England, “one-metre plus”) it was hard to infer the gravity of the global pandemic at street level alone.

Arriving at the salon, however, I saw it in the new bench outside for clients to wait their turn, the extra space between basins and chairs, the determinedly upbeat soul playlist and the eerie silence in between tracks. With a maximum of three clients able to be seen at once, they were working at 40% of their former capacity, said my hairdresser, never one to gloss over the specifics. (He once quoted a paragraph of tax law to me in conversation.)

Working at arm’s length – not without difficulty – his assistant bagged me up in a disposable plastic cape. With my face nearly entirely obscured by my mask and overgrown fringe, I looked like Doctor Cousin It preparing to perform surgery. Another client was wearing either a Burberry face mask, or one made from check fabric so as to resemble a Burberry face mask – I wasn’t sure which was worse.

But with my mouth and nose covered, my hands at ease under my cape, and my face never directly across from another person’s – I also felt comfortably Covid-proof. The fundamental suitability of the salon environment for social distancing highlighted the awkwardness of another one: how, I thought from beneath my protective layers, would you manage any of this at a pub?

Love you to bits, London. You know I do, but Christ almighty, sometimes you lot are a load of shit-brained fuckers. https://t.co/BZBTDOT2WB

I had read that, over the weekend, pubs had tried and failed to enforce a “no shouting” rule in a bid to minimise transmission of the virus. As a bar staffer at a Wetherspoons in Brighton had told Vice, after a harrowing Super Saturday shift: “How would you even enforce that? Are we meant to muffle them?”

Of course masks tend to have that effect. The chief challenge with the PPE was not the hair caught up in the elastic around my ears but the struggle to be heard. I had thought that Covid might put an end to salon small talk, but it was like we were catching up with each other after an especially grim holiday: How was it? What did you get up to?

My hairdresser had had coronavirus early on, describing it as a month of fever and feeling like “someone was sitting on my chest”. He would not wish it on anyone, he said – and he was young and fit. He believed the government had had no specific grounds to single out the elderly and those with “underlying conditions” as being more susceptible to the virus, other than to cover themselves. “They’re liars,” he said, with venom.

As he trimmed my hair he told me that a doctor friend had told him of an elderly woman going to hospital for hip replacement surgery, contracting coronavirus there, and later dying from it – and her death being speciously explained as her belonging to a vulnerable group. “Of course it’s better not to have it, than to have it,” my hairdresser added, addressing the back of my head.

Soho lockdown is over pic.twitter.com/Oa683CfxsM

When I left an hour later, my hair was two inches shorter – but my spirit had not become lighter as I had hoped, four and three and two months ago. In fact the experience highlighted the foolhardiness of trying to recapture normalcy amid a pandemic. Four months since lockdown was imposed, there are still some 20 deaths from coronavirus in the UK each day. The threat is a “long way from gone”, chief medical officer Chris Whitty warned ahead of Super Saturday – yet enough comforts have been returned to us that we have been able to convince ourselves it is.

Not only can you go to the pub, you can now watch the football – with optional fake crowd noise to fill the near-silent stadiums. Tate will soon reopen its galleries with timed tickets and one-way routes round the artwork. You can even go on international holiday via special “travel corridors”, formerly known as “air bridges”, both terms invoking high-tech solutions to ease concerns about non-essential travel – though, per the medical advice, those remain very much valid.

My hairdresser was right: there is still a lot we don’t know about the coronavirus. New research suggests recovered patients could lose their immunity within months. Serious, potentially fatal brain disorders have emerged in those who were only mildly affected or recovering. By any measure it seems too early to celebrate – but if you are willing to risk dinner out, the government will foot half the bill, under the new “Eat Out to Help Out” scheme to stimulate the economy.

Inevitably, Super Saturday descended into a street party – days later, several pubs were closed by a coronavirus outbreak. With England having eased restrictions so much faster than the rest of the UK and much of Europe, a second wave of the virus seems inevitable. Meanwhile I have opted to retreat back into lockdown, to let my hair grow long again.