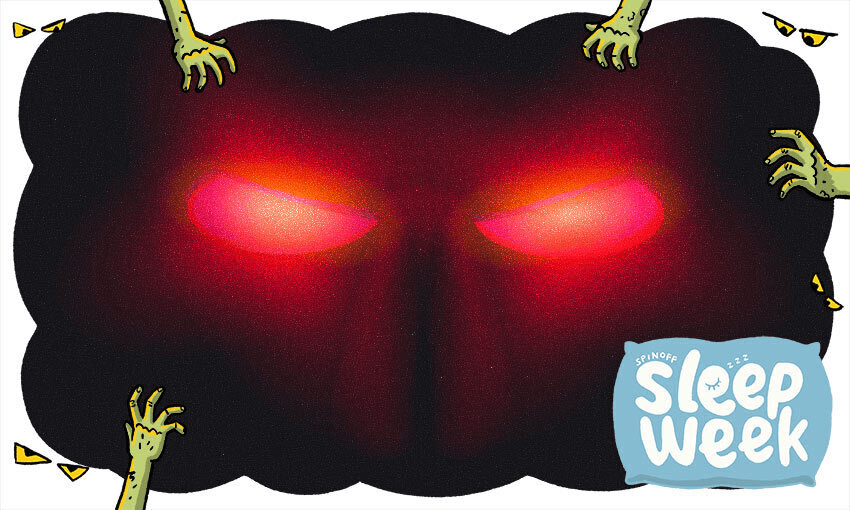 I dream of demons

Two years ago I was visited in the night by a monster. It was a spindly, crystalline abomination that pierced my neck with ice cold fingers. I’d watched Indiana Jones and the Kingdom of the Crystal Skull the week before.

Sometimes, when I wake up, I hear voices yelling at me in a language I’ve never heard. When I go to sleep, I sometimes hear a loud buzzing inside my skull, or crashing and banging in the hallway, or see a massive flash of light. Investigations have shown all of these are in my head. As I slip in and out of sleep, my dreams are projected onto the real world.

I’ve heard things since I was 14 or so, but the full paralysis experience didn’t kick off until my early 20s. I woke up in the middle of the night, frozen in place, staring into an abyss that stared right back with glowing red eyes. Long arms coalesced out of the shadows next to it, and it glided closer. I tried to scream but all that came out was a low, closed-mouth shout. It sounded like “ih!” I managed to move my fingers, and the monster disappeared.

Since that first experience I’ve seen a tall ghoul in a top hat, a crouched figure with trembling hands, a giant spider, and aliens. Usually it’s your common or garden shadow people.

Once upon a time, people with sleep paralysis were visited by cackling witches and their ghostly horses; today, we have a wealth of horrors to draw on. Dr Karyn O’Keeffe, a sleep physiologist at Massey University, says sleep paralysis hallucinations are limited by your understanding of the world and whatever is in the zeitgeist at the time.

“Many cultures around the world have stories that really sound like sleep paralysis. People visiting them in the night, strange beings, paranormal phenomena, a feeling of pressure on your chest,” she says. “A lot of historians have thought that this can be explained by sleep paralysis.”

Around 8% of the population experience sleep paralysis, says O’Keeffe, but it’s hard to get a clear number. There’s not a lot of research into the condition, and it’s possible people who experience paralysis don’t report it; they might just think they’ve been abducted by aliens. The only demographics we know are more likely to get it are students, psychiatric patients and narcoleptics.

For those of you who’ve never known the joys of being trapped between the real world and the dream world, here’s what happens. There are two types of sleep, REM and non-REM. REM sleep is most commonly associated with vivid dreaming, and when we enter a REM state our bodies completely lose muscle tension.

“We’re effectively paralysed, probably so we can’t live out our dreams and hurt ourselves or other people,” O’Keeffe says. “What happens with sleep paralysis, it seems, is the mind becomes awake. Muscle paralysis is still in effect, so you can’t move. It’s kind of like you’ve come out of sleep, but not fully.” If you’re lucky it only stays that way for seconds. Some people have reported being stuck for 20 minutes, but most events are around the six-minute mark.

It sounds scary, but it’s the breathing that really gets me. I didn’t realise the value of neck flexibility until I started spending my nights stuck breathing in very slightly less air than I’d like, because my head was very slightly off-centre. I know the demons aren’t real, but the fear of suffocation is.

Despite being projections of my own half-sunk mind, those demons sure look (and occasionally feel) real. There are three major types of sleep paralysis hallucination: intruder, incubus, and out-of-body. The intruder is the most common kind. You sense a presence in the room, usually an evil one. I see a humanoid figure coalesce out of shadows, and move slowly closer and closer. Others might see a little green alien, or a horned demon, or a ghost. Some people just see a normal human, watching through the window. Yes, they can touch you.

Then there’s the incubus – another term for chest pressure hallucinations. Sleep paralysis can make it feel hard to breathe, as though there’s a weight on your chest. The hallucination will be of something on your chest: a witch, a wild dog, or, more obviously, an incubus. The term “nightmare” comes from this kind of hallucination; “mære” is an Old English word for a demon or evil spirit. A mære would visit in the night and sit on people’s ribcages, tormenting them.

The last kind of paralysis hallucination is probably the best one: vestibular-motor hallucinations are basically out-of-body experiences. These seem to be a little more rare, but people who experience them generally like them because they offer more control over what you’re seeing.

But why do we see these creepy things in our rooms if our minds are supposedly awake? Although O’Keeffe says there is no solid explanation as to why it happens, but can make an educated guess. “It’s probably to do with the fact the REM system in the brain hasn’t fully turned off,” she says. “It’s kind of like you end up in a hybrid sleep state.”

There is one thing she is certain of: no-one’s ever died of sleep paralysis. “I don’t think there have been any reports of people having adverse consequences, apart from being incredibly fearful,” says O’Keeffe. The way I’ve described my experiences above seems matter-of-fact, but she’s right – I just about piss myself every time.

If you suffer from sleep paralysis, there are ways you can make it manageable. I sleep with my forearm up on a pillow – it takes minimal straining to wobble it off the pillow, and then I’m free. Generally once one muscle moves, the rest follow. You will not be able to flex your arm very hard, so you have to rely on gravity. A friend of mine sleeps with his arm on a bedside table for the same reason. Many people focus on wiggling their fingers and toes.

Of course, the best position to sleep in is one that keeps you out of the shadow realm altogether: do not sleep on your back. I know doctors and dermatologists recommend it, but nightly paranormal visitations could give you as many wrinkles as cramming your face into a pillow. O’Keeffe also recommends good “sleep hygiene” – going to bed at regular hours and staying away from substances like caffeine and alcohol that might disturb your sleep.

At least you don’t need to worry about disturbing others with your waking nightmare, because you can’t thrash or yell. In sleep paralysis, no-one can hear you scream – kind of. Years ago, when my sister and I had adjoining rooms, she would complain she could hear me farting at night. One night she came into my room to accost me, and discovered the gurgling noise was me trying to scream through a shadow person visit. Sweet dreams everyone.