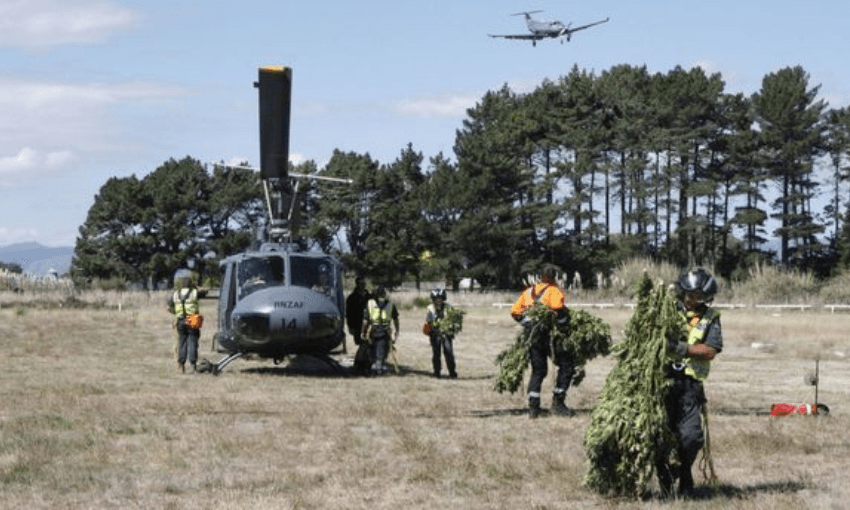 This commendable and realistic decision again underlines that it is the police, not government, who are largely responsible for the reduction in cannabis prosecutions over the past 15 years, writes Russell Brown.

The news that New Zealand police have discontinued the annual Helicopter Recovery Operation, which has, each summer for more than two decades, teamed up with the NZDF to search for outdoor cannabis plots, came out in an unusual way. There was apparently no heads-up for frontline staff and police minister Poto Williams was reportedly unimpressed to find out from the Stuff reporter who called her. It is, nonetheless, welcome news.

New Zealand Police have been taking to the air to look for cannabis since the mid-1970s, when local production began in Coromandel and Northland. Four lives have been lost in that time – one police officer fell to his death from a sling in 1990 and two officers and a civilian pilot died when their light plane crashed in 2005. But it has never dissuaded New Zealanders from either using or producing cannabis.

Airborne policing did, however, drive a big change in the local cannabis industry: it moved production indoors, making it more amenable to organised crime. From the early 90s, growers imported seeds for new, more compact, and generally more potent cannabis indica strains that suited indoor growing. In a city like Auckland, most of the weed you can buy is probably grown under lights on a faceless industrial estate.

In more recent years, the activity was formalised and partly funded via the Criminal Proceeds (Recovery) Act, which provides a contestable fund allocated by Cabinet for (mostly) anti-drug initiatives. And they took a fair chunk of what was available: in one round in 2015, $721,000 went to “more police anti-cannabis surveillance flights”, from a total allocation of $5.1 million. (The largest grant that year, $1 million, went to a programme to identify and prevent foetal alcohol syndrome disorders.)

In addition to the cost of commercial aircraft hire, there was also an effective subsidy from the New Zealand Defence Force, which provided helicopters and personnel. In 2016, an OIA request by Kyle Sutherland seeking that information with respect to the Tasman District operation of that year was bounced around the office of the minister of police, the New Zealand Police, the Royal New Zealand Air Force and the NZDF. The NZDF was able to confirm that the cost of the use of an RNZAF helicopter was $52,800 but declined to provide a breakdown of staff costs on the basis that it would be too much work. The police, for their part, responded that information on police costs in the annual cannabis recovery  operations “is not collated or held”.

There has been little transparency about the cost of the operations (and of any subsequent prosecutions), let alone any benefits they delivered, but it’s not unreasonable to suppose that the operations happened for as long as they did because there was funding to be had every year.

In Auckland, the effect of treating the whole of the Waitakere Ranges as a potential crime scene has not only been to aggravate residents, it has also been to bust the wrong people. As Norml’s Chris Fowlie pointed out last summer, there are no large commercial grows in the Waitakeres. Pearl Schomburg of Auckland Patients Group wrote to the prime minister last year to tell her that after herbicide was sprayed from the air to poison her Northland provider’s specialist crop, many patients, including those in palliative care, went without medicinal cannabis products they relied on. Worse, there were signs that herbicide might have found its way into at least one green fairy product.

In some cases, police may have also used aerial surveillance to get onto the properties of people suspected of other offences, such as methamphetamine distribution. But we should perhaps have learned that the use of cannabis as a pretext for searches is part of the problem.

None of this is coherent with the government’s professed intention to treat drug use as a heath, not a criminal, matter. Yet last year, then-police-minister Stuart Nash gave his backing to the operations. Perhaps that’s why Police Commissioner Andrew Coster neglected to explicitly inform the new minister, Poto Williams, of the force’s operational decision.

Yet I’m not sure this has been quite the surprise it’s been reported as. I was told by a green fairy a few weeks ago that his police contacts had told him the operation wouldn’t be happening. Still, National’s Police spokesperson Simeon Brown has predictably slammed the decision and declared that cannabis eradication flights are necessary to address “the increase in gang activity and violence we’re seeing across the country” – a phenomenon we know is absolutely linked not to cannabis, but the meth trade.

The cancellation of Helicopter Recovery should, in fact, help the battle against meth. It means perhaps a million more dollars a year from the Criminal Proceeds kete to go into treatment and support programmes like Te Ara Oranga in Northland, which was founded by the last National government and sees police work with the local DHB to get people well and keep them out of the criminal justice system.

This commendable and realistic decision also, again, underlines that it is the police, not government, who are largely responsible for the reduction in cannabis prosecutions over the past 15 years, via diversions, pre-charge warnings and less formal approaches. Commissioner Coster seems intent to continue that momentum. But for as long as any part of the system relies on police discretion rather than written law, we’ll see green fairies cleaned out in arbitrary raids, having their plants or products confiscated without the bother of a prosecution that might well fail.

John Key used to declare there was no need for cannabis law reform because the police would decide who they wanted to charge or not. This government, given its rhetoric, should strive for better. Its ministers need to decide who they really want criminally charged for cannabis offences, and why. And they need to act on those decisions.