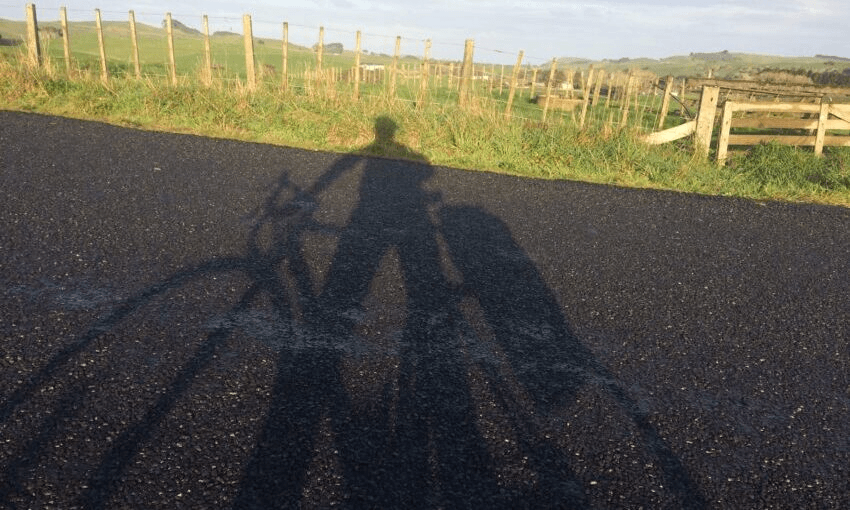 After the second lockdown came to Auckland, Nick Atkinson dusted off and spruced up his bicycle, touring from Pukekohe to Otorohanga.

Two bikes slowly rusted in the back yard. One seized up completely, the other possibly salvageable. The traffic had dried up for periods this year and many Aucklanders took to their pedals on the quiet streets, yet my trusty machines had been abandoned out in the weather. The second lockdown came and I thought: I’ve got to get amongst it. I once loved riding. It had become an obsession at times. Two and half bum-tenderising months were spent cycling across Patagonia on a second-hand mountain bike in the 90s. That bike abruptly stopped rolling during a spectacular collision with a hatchback turning off Karangahape Road. Other bikes had been stolen. One fell apart right at the end of a panting hot cycle across Greece, like the police car collapsing in bits at the end of The Blues Brothers.

I combed the internet looking for a brand new bike to fire my passions, but as I searched it became clear the lockdowns had caused a run on new bikes. While I wanted a specific type of bicycle, they all seemed sold out in my size with no hope of a re-stock for months. I broadened my scope to take in different types and models, but again the shelves were bare. I shut the laptop and opened the backdoor. In our pokey courtyard my two old bikes were shrouded in cobwebs on old leaves. I cleaned up the red bike, purchased in Norway 12 years before, for a frigid three week suffer fest gasping toward the Arctic Circle. Its tyres and tubes were perished beyond repair. I felt sheepish carrying the frame and naked wheels into T White’s Bikes on Symonds Street, but the kind fellow at the counter was encouraging, suggesting a full service and a complete recabling and padding as well as new tyres and tubes. I also got some spanking red tape on the handle bars. For a little over $300 my red bike was refurbished. But I had another surprise in store.

Riding the long way home to take in the waterfront I noticed all the new bike paths with the fresh eyes of a rider reborn. Even more astonishing, other cyclists were everywhere. I did get called a faggot while waiting at one Nelson Street intersection which took me back to my former days being abused and shouted at from passing utes, but I’d hoped attitudes towards cyclists would have softened now that more drivers might also cycle from time to time.

The bike itself had never gone so well. Ryan at T White’s had rejuvenated the brakes beyond expectations and the gear shifts were effortless, almost silent. I got home beaming like a kid. For the next week I pedalled further and further: Mt Eden one day, Okahu Bay the next, taking small steps back to fitness. Gigs had been cancelled by the dozen, giving me a free week starting the day we went down to level two. Let’s get the hell out of this town!

A good friend gave me a flying start with a lift to Pukekohe and from there it was the work of a few minutes to cycle through Tuakau and over the handsome arched concrete bridge across the Waikato where the roads were almost as quiet as the burbling eddies in the river. It was a grey day with flat light, but I could barely contain my joy.

Port Waikato wore a spooky shroud of sea spray and mist as I rattled in. The river and waves seemed to swallow the sounds of the land. The sun set without any colour and I was fast asleep by 9pm. Next morning I packed my meagre luggage into modest panniers and set off for the unsealed roads that wound south. My road bike was jittery on the rougher surface, but I was soon accustomed to a more cautious pace. The old reflexes and instincts from cycling across the pampa and the Andes returned as a new landscape unfurled around each corner. Pale yellow and blue-grey limestone escarpments overhung vivid green pasture peppered with cabbage trees and the odd kahikatea grove. Two cars passed me during the entire morning. I didn’t have far to go to find the Nikau Cave Cafe, alone in the Waikaretu Valley. Anne and Phil put me up and couldn’t have been more welcoming. I appeared to be their only customer, but it’s a favourite stop for motorcyclists looking for empty roads near Auckland.

That afternoon it started to blow and rain. I read old sea stories and drank coffee. These first two stages had been short to ease me back into pedalling, but tomorrow promised to be an endurance test riding well over 100km almost half on winding gravel roads south to Kawhia Harbour. Phil teased me about my proposed start time and casually dropped into conversation that he routinely woke around 5am. It was good encouragement and I was rolling a little after sunrise. Deserted wet roads, soft yellow sunshine, steaming fields.

At first the gravel was fresh and deep and it was tough keeping my skinny tyres on the road. Soon the fresh metal ceased and I sped through gloomy pine forests covering my bike in a fine spray of clay and dirt. The cool of a winter’s morning persisted well into the day and I didn’t start to peel off layers until I was nearing the upper reaches of Raglan harbour four hours later. A short stretch along the main highway heading into Raglan reminded me how fast the cars speed around corners on the open road. I was glad to turn off towards Te Mata. I rested and ate nuts in a sunny school bus shelter.

The tide was ebbing by the time I found the coarse and twisting route that winds around the edge of Aotea Harbour, a brown expanse of shallow sea bereft of boats. Gnarly cypress and macrocarpa leant over the water. Kowhai bloomed. Jasmine and birdsong filled the air. I could feel the grit of salt and dust building up on my cheeks and neck. My nose ran and my eyes watered. I was cycling into the wind across the grain of the country, a ceaseless succession of hills and valleys that grew with each fold southward. My halts became more frequent until my last ill chosen stop found me slumped against an overgrown fence gulping my last water. A pain like a hot needle in my back made me jump up. I’d been bitten by a spider and the effect was instantaneous, like a sharp dose of smelling salts. I was back in my saddle peddling again powered by humming adrenalin.

The Kawhia Hotel is an unremarkable building on a corner in the middle of the village. Bright mid-afternoon sun streamed into the public bar. I’d made it before 3pm after almost eight hours on the bike. I felt a little dopey and I couldn’t stop smiling. I fielded a barrage of questions from the assorted merry patrons enjoying a Wednesday afternoon session with familiar friends. I said I’d come from Port Waikato, which wasn’t strictly true, but they’d never heard of Waikaretu Valley or the Nikau Caves. I’d left there that morning it already felt an age away.

I drank cold handles of Waikato Draft accompanied by stories of iron sand mining and harrowing harbour bar crossings. The talk always seemed to come back to music and one lady in particular loved Bunny Walters. I looked forward to getting home if only to seek out his recordings again. I took a walk at sunset on legs that remarkably still seemed to be working. I’d started to feel pretty out of shape this year and I was genuinely surprised that a tendon or a joint hadn’t gone “ping” during the ride. A cold southerly blew across the mudflats and the muscular hills of Maniapoto rose ever higher to the south. Tomorrow would be an even longer ride following the glorious tarseal that weaves around the edge of Kawhia Harbour then south to Te Anga and inland to Waitomo and Otorohanga. I dreaded the thought, but soon enough I’d be on the bus back to Auckland. For now it was enough to drink in the glorious scene at the end of the day in another beautiful corner of this sometimes secretive land.