Australia Week: In 10 x 100, we survey a group of 100 people via Stickybeak and ask them 10 questions. So far, we’ve quizzed Wellingtonians, holiday motorists and locked-down Aucklanders. This time, we asked Australians all about Aotearoa.

Quarantine-free travel means we’ll be seeing a whole lot more of our mates from across the ditch – either in their country or ours. For that reason, we decided to quiz a bunch on what they know about this fine nation of ours – and, gulp, what they think about us. We surveyed 100 residents of Australia, targeted by geolocation, on everything from the sexiness of our accent to flat whites to what the hell the Beehive is. A reminder: this survey is not statistically representative of the entire population of Australia.

First up, we gave our Australians the names of five New Zealanders and asked who among them they’d most like to meet. Over half of the respondents chose the prime minister, Jacinda Ardern, with the other four options trailing behind. Tying for second place with film-maker Taika Waititi, however, was Keri the Kiwi – a pretty good effort for a red herring made up solely for the purposes of this survey. With Keri beating out All Black legend and acclaimed actor Richie McCaw, as well as jailbird songstress Lorde, surely it’s only a matter of time before our fictional feathered friend gets her own Spinoff webseries.

As I detailed here, the origin story of the little Antipodean coffee that took over the world is the subject of a trans-Tasman shitfight to rival the best of them – but almost a third of our respondents had bigger things to worry about than where the flat white was invented. Nearly as many reckoned it was created in Australia, but those championing NZ followed close behind, with Italy languishing in last place.

We have so many good islands in Aotearoa – I live on this one, by the way – but which one do the Aussies like the best? Bit of a surprising result here, given most Australian visitors fly straight into the South Island, but Te Ika a Māui triumphed. Poor old Rakiura was beaten for third place by another red herring – Nanumea Island is an atoll in Tuvalu with a population of 512. Australians bloody love Queenstown, but most were savvy enough to realise it’s not an island – or at least not their favourite.

New Zealanders living in Australia may not get much love from the government there, but it appears Aussies on the ground quite like having us around, with 65% of our respondents reckoning New Zealanders make the place either a little or a lot better. Only 3% thought we made the country worse, with 11% reckoning there was zero impact (pretty disrespectful to the entire cast of The GC, tbh).

A huge result here for Aotearoa, with an impressive 39% of respondents finding the much-mocked New Zillun ecksent “a little sexy”. Stop it, Australia, you’re making us blush. Add in the legends who chose “extremely sexy” and you’ve got a full 50%, with only a fifth of respondents claiming to be turned off by our dulcet tones.

Maaaaate. Everyone knows New Zealand and Australia are mates, mate, but are they really mates? Mate, our survey would suggest yes, they are mates (mate). A massive 67% of our 100 respondents had either between two and five or more than five New Zealand friends. Who even has that many friends of any variety? Aussies, clearly. A not insignificant 22% had not a single Kiwi cobber, however, with 11% having just the one.

So they’ve got Kiwi mates, but do they know the lingo? Just under half of our 100 Aussies knew how to say hello in te reo Māori, but a chunky 28% had not a clue and 16% chose the similar Cook Islands Māori word. The Sāmoan talofa didn’t catch out many, with more people hazarding a guess on the Spanish greeting.

Multimedia round! Showing our group a pic of the Beehive and asking “what the bloody hell is this?” prompted fairly widespread confusion, with less than half picking the correct answer. A sizeable 33% of respondents thought our most famous building was the Auckland art museum, with smaller but not insignificant numbers hazarding a guess on the Wellington opera house or a Māori meeting house.

Come on, cobbers! Every New Zealander knows what Australia’s parliament looks like: Word cloud time! We asked our group to describe the best thing about New Zealand in no more than three words. Around a quarter of respondents reckoned it was our scenery or landscape, with almost as many choosing the people, describing us as “very cool”, “friendly” and “beautiful”. One person simply said “they are mates”. I’m not crying, you’re crying!

Culture got five or so mentions, food three – including one person breaking the word limit to specifically mention L&P, Jelly Tips and fish and chips – and fishing two, though one of them had a question mark after it (err… the fishing?)

One person said the accent (we know how you voted in question five), one reckoned Lord of the Rings, and one opted for our prime minister. Yet another said we had “the hottest women” – can’t argue with that – while others referenced our resilience, progressiveness and inclusiveness. Two respondents chose the mighty All Blacks as our best attribute, with another two opting for the very big plus that we don’t have snakes.

Just in case you were letting all that praise go to your head, though, a handful of nasty characters said the best thing about New Zealand was the flight home, with one simply stating: “Sorry nothing – hated NZ”. Jeez, tell us how you really feel. 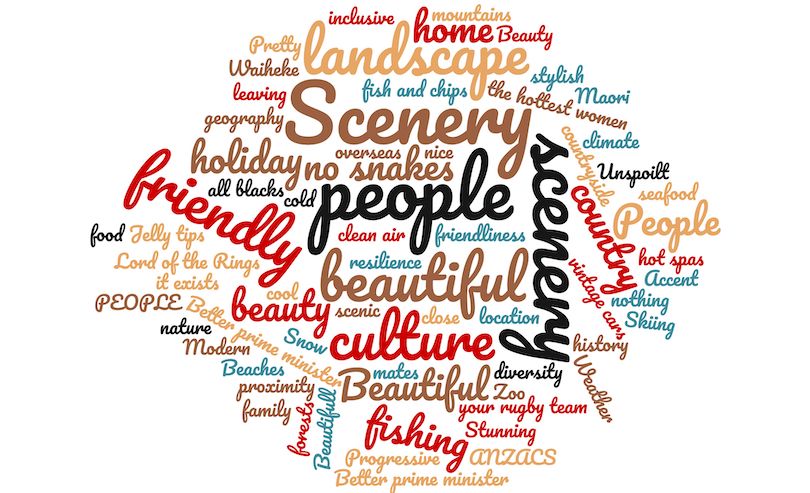 Finally, we asked what’s the worst thing about New Zealand. The most common response was the climate: “it can get pretty cold”; “too cold”; “the cold weather”; “its South Island is cold”; “close to Antarctica”. Come on Aussies, it’s nothing a Swanndri won’t fix! Following closely behind was our propensity for earthquakes, with one person simply saying “wobbly place”. Fair assessment.

Another common answer was Rotorua’s unique sulphuric aroma: “the stinking smell”; “rotorua smells bad”; “I don’t know how to spell it but the place with the awful smell Rota something”.

“Some pubs”, another person answered, while “price of beer” and “price of goods” also cropped up. The lack of housing, jobs and transport was mentioned too. One person said being “too pretty” was our worst trait, while three reckoned it was our prime minister. “Kiwis”, “New Zealanders”, “the people” and “the accent” were also mentioned, and one person just said “they’re totally arrogant”. Cheers, mates!

Let’s end on a high note, however, as quite a few people said there was nothing at all bad about Aotearoa: “I know none”; “not a thing”; “nothing wrong”; “mpthing”. And what should certainly be our official slogan: “nuthink still nice”.