Australia Week: Nothing tests our mateship with Australia like the disputed delicacies both countries claim as their own. In the interest of diplomatic relations, Alice Neville sets the record straight.

Australia stealing stuff from us and claiming it as its own is a core tenet of the trans-Tasman relationship. From Phar Lap to the flag, our Olympic medal tally to Lorde, the Aussies have been appropriating New Zealand’s shit since the first convict high-tailed it across the ditch to Kororāreka (and probably claimed whorehouses were invented in Sydney or something).

Or have they? When it comes to our relationship with our Aussie mates, New Zealanders can be a sensitive bunch, perceiving rivalries and injustices where they may not exist. Nowhere is this clearer than in the delicate realm of food – claim a Kiwi’s favourite snack as Australian at your peril.

Then again, maybe Australians really will stop at nothing to trample on the hopes and dreams of our plucky little nation. We needed to know for sure, so delved into the farthest reaches of the internet to uncover the truth about who owns what. (Disclaimer: the decisions below are based primarily on vibes rather than actual evidence.)

In the latest episode of Dietary Requirements, Alice, Simon and Sophie discuss perennially disputed Australian / New Zealand foods and much more. Subscribe and listen on Apple Podcasts, Spotify or your favourite podcast provider.

Let’s start with the obvious, the meringue-based dessert that has driven a giant fluffy white wedge between our two great nations. What’s not in doubt is that the pav was named after Russian ballerina Anna Pavlova, who toured the Antipodes in the 1920s. New Zealanders reckon it was invented by an unnamed chef, inspired by Pavlova’s tutu, at a Wellington hotel in 1926, while the Aussies claim a bloke called Bert Sachshe came up with it in Perth. As Otago University food academic Dr Helen Leach pointed out in her 2008 book, though, that wasn’t until 1935, some six years after the first New Zealand pav recipe had been published.

A couple of years after Leach’s book was published, the Oxford English Dictionary confirmed what New Zealanders have always known: the pav is ours. (Let’s politely ignore the shit-stirring researchers who have since gone and thrown a spanner in the works by claiming the pavlova is actually German, American or English and just take this one, OK New Zealand? We deserve this.)

A pav recipe from the Manawatu Times in 1932; and an ad for a pavlova demonstration in the Press in 1934 (Photos: Creative Commons/paperspast.natlib.govt.nz)

The facts had long pointed to Australia owning the “lammo”, as it’s disgustingly referred to across the ditch. This delicious choc-n-coconut-covered spongey square was thought to be named for Lord Lamington, the governor of Queensland from 1896 to 1901, or perhaps his missus, Lady Lamington (brb gonna quit my job and open a charming bakery called Lady Lamington).

According to one account, the Lamingtons’ chef, a Frenchman called Armand Galland, accidentally dropped a sponge cake in a dish of chocolate, and an icon was born. The coconut was a later addition, inspired by Galland’s Tahitian wife.

Everything changed in 2014, however, when the Guardian ran an April Fool’s Day story claiming new research proved the lamington was in fact invented in New Zealand, and originally called the Wellington. 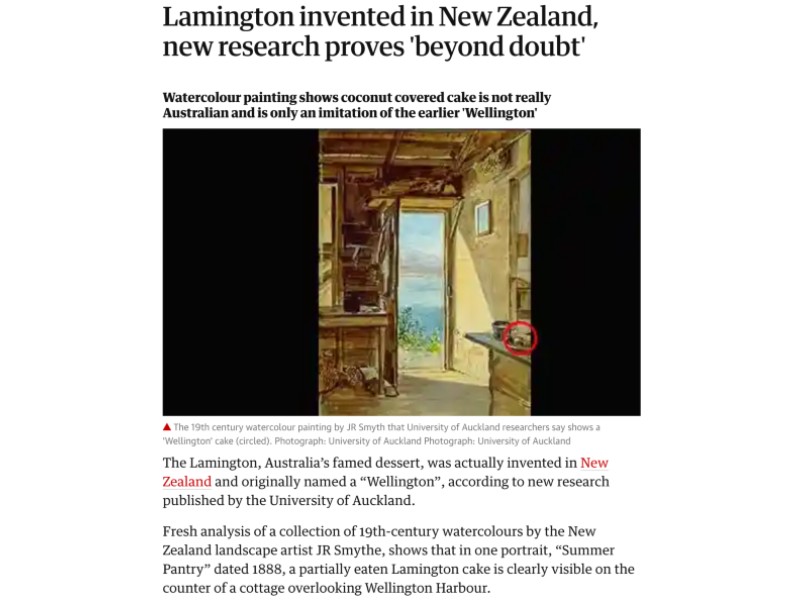 It was such a convincing gag that media outlets as esteemed as The Edge and taste.com.au continue to perpetuate the falsehood, and to this day the story appears prominently in Google results. And in this post-truth world we live in, maybe that’s enough? What are facts anyway?

Verdict: If you care about “evidence” and “facts” and stuff, probably Australian. If not, 100% Kiwi. (Either way, the raspberry version is more popular here, if Wikipedia is anything to go by, so surely we can claim the fun one as ours.)

If any baked good was to bring our two nations together, surely it’s the Anzac biscuit. It’s there in the name, after all: Australia and New Zealand Are Cobbers. But unsurprisingly, both countries lay claim to inventing this crispy teatime treat.

What’s not in dispute is that Anzac bikkies have much to do with World War One, but it’s unclear whether they were baked in the Antipodes and sent over to sustain our troops abroad (“neat, a dry biscuit from the other side of the world to make me feel better as I succumb to dysentery in a trench”), or simply scoffed by those back home as an attempt at long-distance moral support.

A recipe for Anzac biscuits appeared in a Perth newspaper in 1916 but crucially, it bore little relation to the bikkie we know today. A more recognisable recipe was published in a Melbourne newspaper in 1921… But enter pavlova patriot Dr Helen Leach to rain on the Australians’ parade. A recipe for Anzac crispies, bearing startling resemblance to the biscuits we know today, appeared in a New Zealand cookbook in 1919, Leach discovered some seven years ago. Case closed. 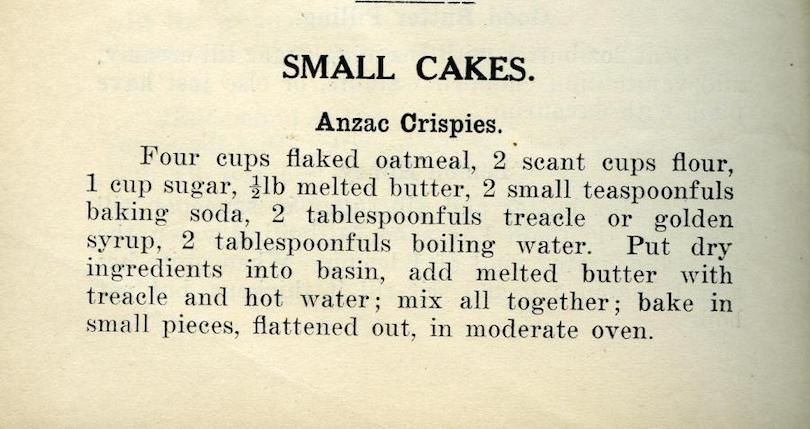 The OG, from the St Andrew’s Cookery Book

To add insult to injury, it appears to be fairly conclusive that these breakfast bricks were invented in Australia, by an Australian, despite the fact the “history” section of Weet-Bix’s New Zealand website is vague-bordering-on-misleading. (They have, at least, been made here since 1930.) The other day an Australian trickster created a fake petition to change its name, but the real question here, surely, is who the heck owns fairy bread? According to Wikipedia, the first known reference to the hundreds-and-thousands-atop-butter-atop-bread delicacy was in a 1929 Hobart newspaper article, which mentioned children at a “consumptive sanatorium” (kind of like an MIQ facility for kids with tuberculosis) being served the nutritionally void triangular treat at a party. Picture Tasmanian tots nibbling fairy bread in between coughing violently, I guess.

I call bullshit on this being the fairy bread’s origin story, however, as in 1914 the Mataura Ensign referenced fairy bread as one of the children’s exhibits at the Gore flower show – one E. Briggs took out the top prize. In January 1925, meanwhile, the “lady editor” of the Feilding Star’s women’s pages recommended including fairy bread in a lovely hot weather luncheon.

What’s more, in 1935 the Wairarapa Times mentioned fairy bread in reference to patupaiarehe, the mysterious spirit beings who have dwelled for thousands of years in the depths of our ngahere and misty maunga. So there you have it – not content with stealing the entire country, could the Pākehā have stolen fairy bread from tangata whenua too?

Verdict: Aotearoa owns fairy bread and I shall happily die upon this hill. Please do not use margarine (Photo: Getty Images)

One night in New Plymouth in 1969, following my dad’s 21st, his friend got arrested for writing “fuck” on a shop window with a pie. I was told this story at a young age and have always found it exceedingly funny, but in some strange way, does it not also sum up the place the humble pie holds at the heart of our culinary culture?

Problem is, some Australian out there probably has a similar anecdote. That’s right, pies are Kiwi as but they’re also deepy, unavoidably Australian. Consider the outcry triggered by then PM Malcolm Turnbull eating one with a knife and fork in 2018. Just weeks later, he lost the election – a clear sign this is a country that takes its pie culture seriously.

You’d have to be an arrogant Antipodean to claim either country invented the pie, however – that was probably the Egyptians, or the Greeks or Romans if we’re splitting hairs on what constitutes a pie, or, truth be told, some people of colour somewhere who were erased by the eurocentric history books. Pies branched out in many different directions around the world but in Australia and New Zealand, the single-serve meat pie became de rigueur. In Australia pies became synonymous with Aussie rules football; while in New Zealand a culture developed around the pie cart, a forerunner of sorts to the modern food truck.

So who owns the Down Under-style pie? Well, the first evidence we have of a Kiwi pie is from a 1863 newspaper ad, tardy when you consider that Sydney’s “flying pieman” was plying his wares in the 1840s. Then again, according to Wikipedia, the average New Zealander eats 15 pies a year, compared to the Aussie average of just 12.

Verdict: Presumptuous of us to even entertain the notion that something as noble as the pie can be “owned”. In short: uncertain. 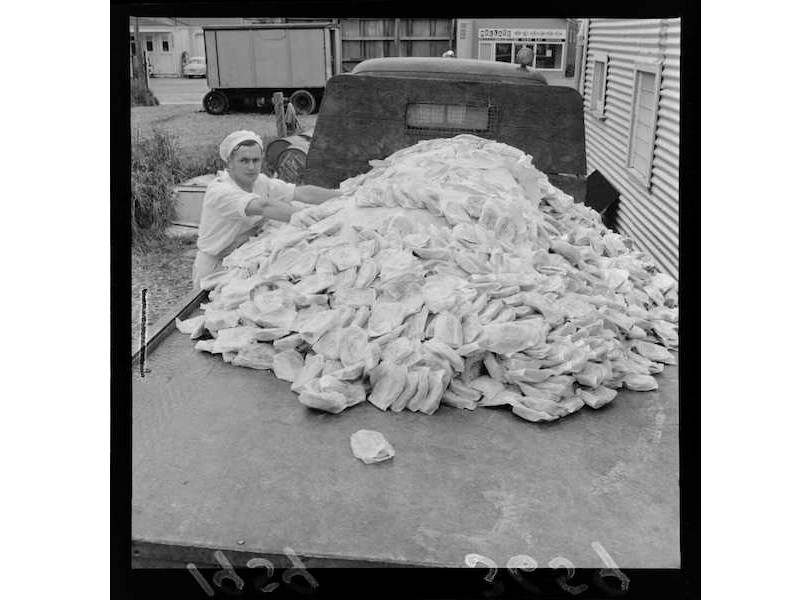 When I first moved to Auckland from Wellington as a young barista in the mid 2000s, I was horrified to discover a flat white in Auckland was an aberration: using only a single shot of espresso, it was served in a big cup. Unacceptable. In Wellington, a flat white was always a double shot in either a 140ml tulip cup or the slightly larger 150ml cup.

Thankfully, some 15 years on, Auckland has realised the error of its ways, and at most decent cafes a Wellington-style FW is now standard (warning: at some places you’ll still get a bloody swimming pool filled with a milky waste of time). My somewhat limited travel across the ditch suggests they err large and weak in Australia too.

The main contenders are Alan Preston of Sydney, who says he came up with the flat white at his cafe in 1985 and is very cross at the New Zealand challengers; Auckland’s Derek Townsend and Darrell Ahlers, who reckon they invented it at DKD Cafe in Auckland in 1984; and Wellington’s Fraser McInnes, who claims to have created the flat white at Bar Bodega in 1989.

As much as I’d love to back McInnes’s claim, 1989 is quite late, and those bloody Aussies have photographic proof of flat whites on cafe menus some years earlier. What about the Aucklanders? Interestingly, the DKD crew admit that the name “flat white” was in use in Australia first, but reckon they made the coffee what it is today by developing the “stretching” technique of steaming milk, which makes it super smooth and velvety as opposed to god-awful dry and frothy (I’m looking at you, 1980s cappuccino).

Verdict: Wellington, despite an absolute lack of proof.