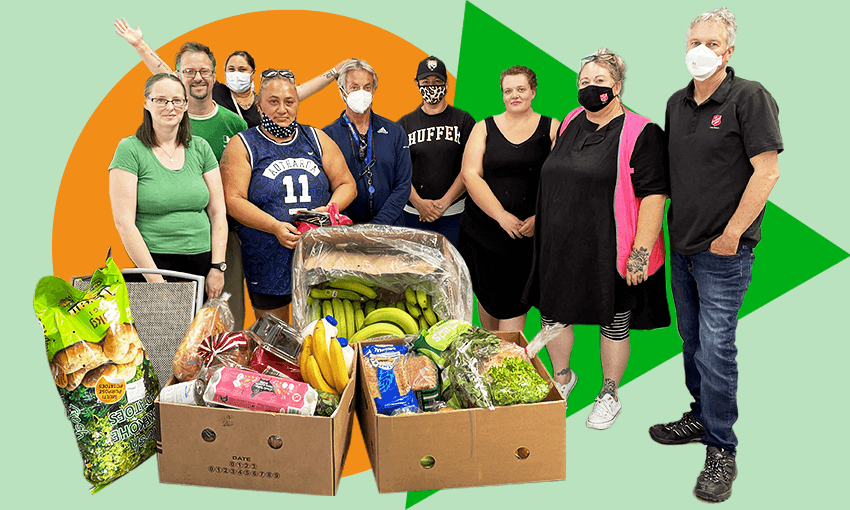 Food banks are a godsend, but this charity believes there’s a better way

Food banks are under more pressure than ever due to the cost of living, but one South Auckland social service questions whether they’re the only way to help.

“When I heard what the milk price was, I was in.”

As a member of this fledgling co-operative scheme, she gets a large box of fruit and vegetables every week for $15 plus discounts on other essentials like eggs and mince – including $2.25 for milk, which is almost a dollar less than in the supermarket. Members also receive a raised garden box set-up at their home, courtesy of the Whenua Warrior community gardening charity, that comes with a range of seedlings including herbs, spinach, silverbeet and capsicums. In addition, members lead the establishment of free community pantries or pataka kai around their area, which they stock with leftover food from their gardens.

The man behind this innovative initiative is Lieutenant Steve Molen, who runs the army’s Clendon and Manurewa family stores. He says that with the cost of living rising at an alarming rate, he wanted to come up with a way to help his community – without the shame food banks can create.

“We’ve been aware of struggling families, so we asked ourselves, ‘How do we create more food security and less dependence?’,” he says. “We’re also aware how food banks make people feel quite stink. It’s not great for their sense of self-worth.”

Rena says not only has the co-op made a huge difference to her shopping bills, but it’s enabled her to help others.

“I’m a sole parent, on a benefit and mother of five so it’s been a struggle,” she says. “But this has been a big help for not only me, but my community, as I’ve been able to buy extra boxes for my neighbours.”

She says having a new vege garden has also been a great way to teach her children some new skills. “My kids planted out all the garden stuff and now the plants are thriving and I’ve already given some of the veges to the local kindy, to the pataka and to the library.”

Another aspect of the initiative is that members all gather once a week to pack the food boxes together in a warehouse next to the Clendon family store, and organise deliveries to the pakata kai around the area. Manurewa couple Patricia and Patrick say that, as well as the affordable food, they have really appreciated the social aspect of the scheme.

“We get together, talk and find out how people are doing, which is a lot more than what you can do at the supermarket, so there’s a whole other level to it – and you start to feel a bit more a part of the community.”

Molen has secured funding to employ a facilitator to run two co-ops in Clendon and the plan is to start up another one from the Manukau Salvation Army in the coming months. He says giving people a way to help themselves and others is at the core of the initiative.

“The whole concept of the co-op is about helping your fellow members,” he says. “You’re taking stuff, but also putting stuff back in, and also offer your other skills and talents to help your fellow co-op members. We’re finding that people love being generous and so by the end of the year the idea is for this co-op to be self-supporting and our facilitator to go and set up other co-ops elsewhere.”

But as the army’s senior social policy analyst Ronji Tanielu says, it’s not a sustainable approach to addressing hardship. “Social services need to look at innovative alternatives to food banks that are more sustainable, because this current government funding for food banks is not permanent,” he says.

“There will likely be more financial and social shocks like Covid in the future, and the cost of living and inflation pressures will continue to squeeze those on the lowest incomes more than other New Zealanders.”

Richard, another member of the co-op, sums up why he believes the scheme is so worthwhile.

“Food is probably the single biggest item in our budget, so times are tough at the moment and this is the way to beat it – that’s the bottom line. And not only that, but it is about being part of something, which is really the ethos of The Salvation Army –  you receive something and you give it out.”