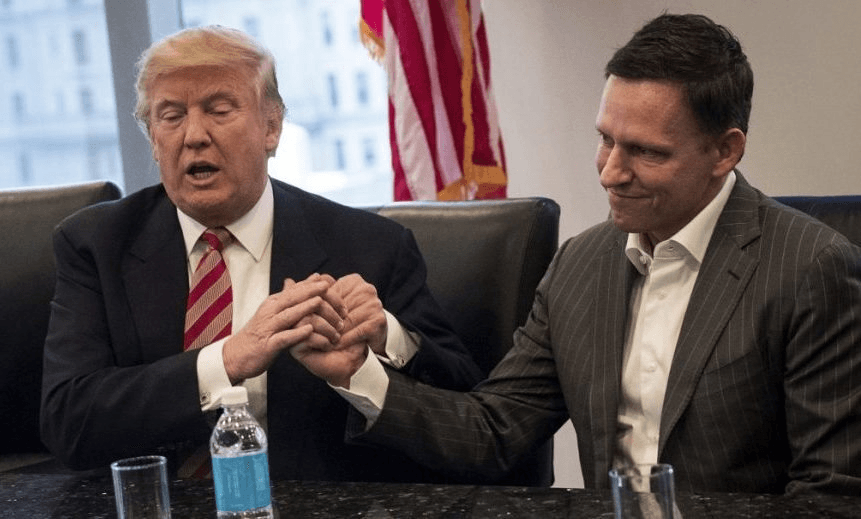 Controversial Trump endorser and Silicon Valley billionaire Peter Thiel is reportedly now a New Zealander. But how did that happen, and who the hell is he? Toby Manhire counts the ways.

He’s already got quite the CV: founder of PayPal, early investor in The Facebook, funder and advocate for both Hulk Hogan and Donald Trump. He’s been tipped for all sorts of big jobs, from Trump appointee on the Supreme Court to California governor. And he’s also, it turns out, a New Zealand citizen.

The big story comes from the Herald’s Matt Nippert, the Han Solo of NZ newsgathering. Nippert reckoned a sumptuous lakefront property in Wanaka purchased by Thiel via his company Second Star might very well meet the criterion of “sensitive land” under the Overseas Investment Act. Had he sought or received permission from the office? The official response: “Second Star and Mr Thiel did not need consent as he has New Zealand citizenship.”

But how did he get that citizenship? Remember that the Investor and Entrepreneur visas are pathways to residency, not citizenship.

1. Has Thiel satisfied the Citizenship Act’s criteria for “Citizenship by grant”, which include the requirement that “the applicant was present in New Zealand— (i) for a minimum of 1,350 days during the 5 years immediately preceding the date of the application; and (ii) for at least 240 days in each of those 5 years”?

It’s possible, but given his schedule, this probably would have required that he cracked the secret to cloning first.

2. Was he quietly born here? Or one of his parents? Don’t know. Maybe. Maybe not. Pretty sure not.

3. Or did he gain citizenship under the “special cases” provision. Being this:

Does Mr Thiel (chur, bro, by the way!) gain citizenship because the minister judged it “in the public interest because of exceptional circumstances of a humanitarian or other nature relating to the applicant”?

4. Or is Peter Thiel a prospect for the New Zealand team at the 2020 Tokyo Olympics?

According to the NZ Internal Affairs guidelines, “if you don’t meet the [five-year] requirement, you might still be able to get citizenship if: you’ve been here for at least 450 days in the last 20 months, or you can prove New Zealand would benefit from having you as a citizen”.

Click through for some “special consideration” elaboration, and the DIA advises:

You need to give evidence that shows how New Zealand will benefit from your citizenship, eg:

Interestingly, there is no reference whatsoever in the Citizenship Act to the “showing how you’ll benefit New Zealand” phrasing from Internal Affairs.

As far as I can tell, it is an interpretation of the “public interest” exception mentioned above. That is: the minister may “authorise the grant of New Zealand citizenship to any person … if the Minister is satisfied that granting a certificate of New Zealand citizenship to the applicant would be in the public interest because of exceptional circumstances of a humanitarian or other nature relating to the applicant”.

It’s all helluva puzzling, and no doubt we’ll learn more in days and weeks to come, but if indeed Thiel did get his citizenship via a Special Benefit Exceptional Circumstance Other Nature sort of ministerial golden ticket, then …

5. Doesn’t this invite outrage that we’ve created some kind of Overseas Investment Act back door?

Peter Thiel is a libertarian, a Republican, a wildly successful investor, valued by Forbes at $2.7 billion. He has an amazing stare – not altogether unlike fellow Trump acolyte, spokesman Sean Spicer, in his recent appearances – that gives the impression of having necked half a dozen espressos and quietly soiling oneself. And fair enough, we’ve all been there. But then there’s this …

1. Peter Thiel secretly funded a lawsuit against the gossip and commentary site Gawker, which had outed him as gay many years earlier, that drove it to bankruptcy. He was bankrolling a suit taken by wrestling legend Hulk Hogan.

2. Peter Thiel later said that he’d supported Hogan in part because “if you’re a single-digit millionaire like Hulk Hogan, you have no effective access to our legal system.”

3. Peter Thiel wrote in 2009: “Since 1920, the vast increase in welfare beneficiaries and the extension of the franchise to women – two constituencies that are notoriously tough for libertarians – have rendered the notion of ‘capitalist democracy’ into an oxymoron.” (He later clarified: “It would be absurd to suggest that women’s votes will be taken away or that this would solve the political problems that vex us. While I don’t think any class of people should be disenfranchised, I have little hope that voting will make things better.”)

4. Peter Thiel also wrote, of democracy: “I no longer believe that freedom and democracy are compatible.” And: “Because there are no truly free places left in our world, I suspect that the mode for escape must involve some sort of new and hitherto untried process that leads us to some undiscovered country.”

5. Peter Thiel is big on seasteading – he has funded and welcomes the inevitable advent of new, entirely fabricated and floating nation states out in the ocean, with new rules and a new constitution, so that people can be free. Free! His seasteading pals are planning to “build a floating techno-libertarian city in a French Polynesian lagoon”.

6. Peter Thiel has said he thinks there is “a sense in which government is an almost literally demonic entity in the world we’re living in today”.

7. Peter Thiel said writers at Valleywag, a former Silicon Valley gossip site run by Gawker, “should be described as terrorists, not as writers or reporters” and that “Valleywag is the Silicon Valley Equivalent of Al Qaeda”.

8. Peter Thiel once, according to two former Stanford classmates, described apartheid as “a sound economic system”. Thiel denies ever having supported apartheid.

9. Peter Thiel wants to inject himself with young people’s blood.

This article was updated at 1oam on Jan 25 2016 to add material from the Internal Affairs website citizenship guidelines.