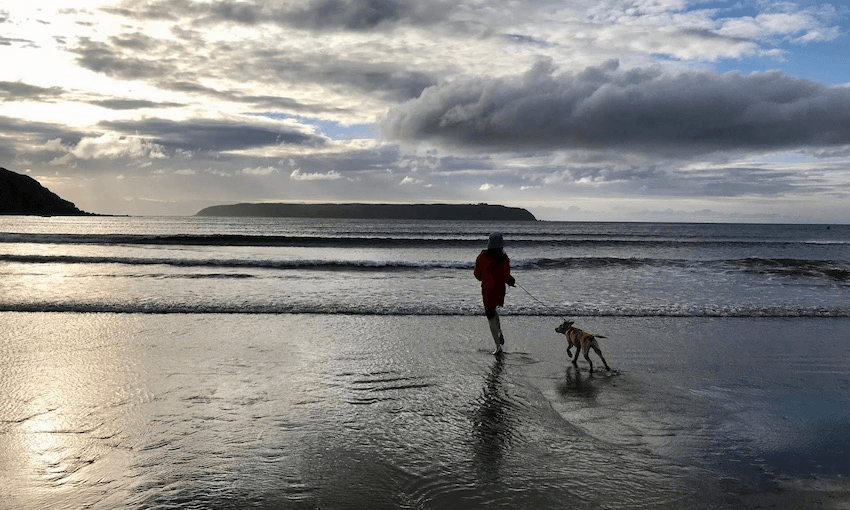 Piiata on the beach at Tītahi Bay with her girl (Photo: Supplied)

Why did we get a dog? To fix the unfixable and fill the unfillable

Piiata on the beach at Tītahi Bay with her girl (Photo: Supplied)

Piiata the lab was supposed to paper over the cracks of Nadine Anne Hura’s broken family with beads of glittering gold. Instead, she began to dismantle the house one panel and one cushion at a time.

She was second to last of the litter and fully golden. We took her home and called her Piiata. She was four months old and sweet-faced. The other dogs at puppy class were either docile or maniacal. Piiata was neither, just the perfect blend of personality and smarts. On the first night of puppy class I looked up at the wall to all the portraits of winning show dogs from 1984 to 2019. I thought to myself: that will be Piiata one day. Loyal, intelligent Piiata, taking her place among champions at the Ngāti Toa Obedience & Agility Club.

Instead, a year later, I found myself forking out a day’s wages for a home visit from a dog therapist.

“This dog is anxious,” the trainer diagnosed within four minutes of walking inside the house. It was like having a psychic medium crossed with Supernanny standing in the living room. “I’m going to give it to you straight. This dog’s got no idea who’s in charge.”

My boys laughed. I felt like curling up into the foetal position and weeping. They say that love is blind but I think it might be more accurate to say that love is stupid. There’s no point pretending that my decision to get a dog wasn’t an attempt to fix the unfixable and to fill the unfillable. I remember lying in bed the night before we drove up to Feilding to bring her home, fighting off waves of nausea in an effort to convince myself that a dog, like the art of kintsugi, would paper over the cracks of our broken family with beads of glittering gold. Piiata.

There is something reckless about the way we go into hard things. Willingly, sometimes even eagerly. Some days I think I would do it all over again, just to relive the moment my daughter realised that one of the clambering puppies in her lap would be coming home with us. She shielded her face from their feverish licks and looked up at me with an expression that no camera could ever capture. “I can’t believe this day is really happening to me,” she whispered.

The trainer cleared her throat. “So, let’s talk about the kind of dog you thought you were getting, shall we?”

I pointed wordlessly to my daughter.

She bit her lip.

“I see,” said the trainer, turning to face me with a stern eye.

“So, can you tell me, if your daughter wanted a lap dog, how you ended up with a labrador?”

I was too tired to defend myself. Piiata had chewed every soft furnishing inside the house and recently started on the outside. She’d dug up the rose bushes with impunity and torn the screen door from its hinges. She was dismantling the house one panel and one cushion at a time. At 4am one morning, I turned in desperation to Google only to read that some dogs can live up to 17 years, a full year and a half longer than my marriage. Why hadn’t I got a lazy and affectionate retired greyhound in mid-life?

I looked up feebly and said: “I read that labs are easy to train.”

“Well,” said the therapist, withdrawing a plastic squirt bottle from her satchel. “That’s true if you know what you’re doing.”

Within moments, Piiata was obeying the trainer’s every command. When she gave the squirter to me, Piiata sat down and started licking her ass.

“What I’m observing here” the trainer dogsplained, “is a serious breakdown in your relationship.”

Her tone reminded me of the similarly priced family therapist in Whitby.

“Now, there are a few things you can try, but I can’t make any guarantees.”

She walked us through a six-week training regime and gave us a deadline by which we should see an improvement.

“She’s a sweet girl,” she said to my daughter, packing up her tools. “But honey, she may not be the right dog for you and that’s OK. Sometimes things don’t work out, as much as we really, really want them to. Do you know what I’m saying?”

I couldn’t see my girl’s face but she leaned tighter into Piiata’s neck and nodded.

“It’s nobody’s fault. It doesn’t mean you don’t love her. Actually, it‘s a sign that you really love her, because you’re willing to sacrifice your own feelings so that Piiata can live her best life.”

The trainer lowered her voice and spoke softly. “And then, maybe not straight away, but eventually, you can think about getting a little lap dog?”

I blamed myself, of course. Sometimes you can plan too much. Sometimes you can make all the wrong decisions for all the right reasons. I stood outside on the deck and tried to detach myself. I looked at the torn screen door and the dead roses and let myself see the situation with different eyes: Piiata wasn’t bred for lap cuddles, she was bred to work. Both parents had been working sniffer dogs, rescuing lost trampers from deep in the Tararua. She wasn’t being naughty. She was just responding to the impulses within her. Maybe one day she would go on to save someone’s life, and who were we to stand in the way of that destiny? I remembered the counsellor who seemed instinctively to understand how much I needed to be free. How could we deny Piiata’s true nature, and in the same breath declare that we loved her?

Before we brought Piiata home I told my nephew we were getting a puppy. He laughed and wished me luck. He wasn’t being cruel, just honest. His grief for Max, who’d slept at the end of his bed for 14 years, was still jammed up in his throat. I wanted to ask if he regretted it, whether the loss was so great he’d rather not have loved at all, but he‘d already hung up. Besides, I knew the answer. Pets and lovers are disarming and it pays to remember that before you unlatch the gate.

The night the trainer left, I held my girl in a backwards hug in bed as she sobbed into her fingers.

“It’s not fair to hold on to someone who wants to leave,” I said, hating myself. “A relationship isn’t working unless it’s working for both parties, right?”

I squeezed my eyes shut and thought of the altar. If you want to protect your kids from the inevitability of pain you should never get a pet, but if you want to teach them how to love then you must.

I felt myself unlatch the gate. Because really, is there any other way to love?