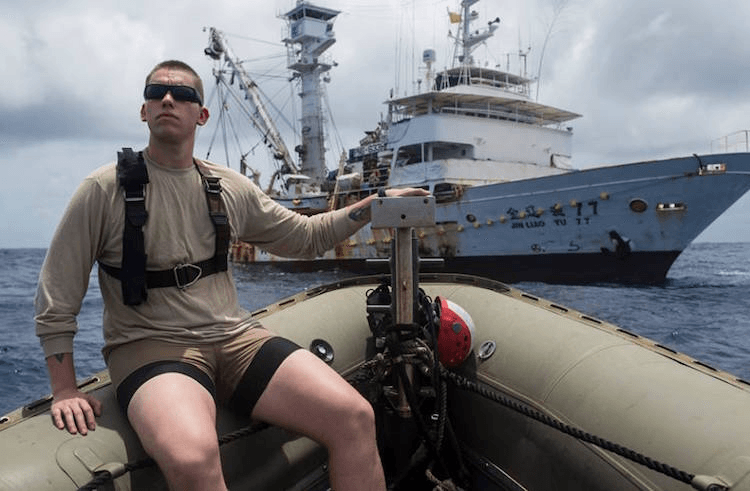 How China’s illegal fishing armada is plundering the South Pacific

Illegal fishing, much of it by China, is costing some of the world’s smallest and poorest nations hundreds of millions of dollars. Why isn’t New Zealand doing more about the blatant theft in its backyard, asks Michael Field.

It would have been a tense moment or two for Captain Wang Chang Fu when, in the middle of the Pacific, his ship was boarded by armed men from an American guided missile destroyer.

That the men and women boarding the Chinese flagged purse seiner Jin Liao Yu 77 were from the USS William P. Lawrence only made it stranger.

The US 7th Fleet says no violations were found on Wang’s skipjack tuna boat. The 32 crew had been “cordial and intrigued by US presence in the region”, they said.

The US seldom checks out the South Pacific and Washington is mostly ignoring the region. But things might be changing.

China’s deep water fishing armada, the largest in the world, is plundering the South Pacific. Just as they are wiping out Africa’s elephants to make ivory chess-pieces and India’s tigers to fight off impotence, they are rapaciously taking as much tuna as they think they can get away with, including endangered species.

Inside esoteric fishing rights conferences it is common knowledge that China’s new and powerful boats could within a decade destroy the $3 billion a year Pacific tuna industry.

Since 2012 the Chinese Pacific fishing fleet has grown 528 per cent.

With heavy subsidies, it is Chinese state policy to make it worthwhile for their fleets to go after the last fish.

But Pacific nations, beholden to Beijing for the Lego-like buildings popping up in their capitals, are mostly silent, as was shown recently in Auckland at the release of a report written for the Forum Fisheries Agency by Australian consultants MRAG Asia Pacific on illegal, unregulated and unreported (IUU) tuna fishing in the Pacific.

IUU fishing was said to be worth US$616.11 million each year or 20 per cent of the annual catch. It’s like every person on Tuvalu was robbed of US$4400 a year.

Nowhere did the report say who the thief was and officials, when asked, blushed and preferred not to say. That’s because it is China, with the worst culprits their hundreds of new longliners.

Armed with 3000 hooks on 100 kilometre lines, longliners target albacore and yellow fin. Silky and whitetip sharks are a favourite “by-catch”, their fins kept and the rest dumped.

The scale of Chinese abuse of the tuna fishery is easily tracked but often ignored.

Two years ago the China Tuna Industry Group launched an IPO on the Hong Kong Stock Exchange seeking US$150 million for fleet expansion. Its prospectus said it had for years breached international fisheries agreements and broke quotas. It said there was no risk of them being held responsible, so investors need not worry.

Then there was the case of two Aucklanders game fishing out of Vava’u in Tonga in November 2012. They caught a blue marlin reckoned around 75 kilograms. They tagged and released it. Two years later the same fish, weighing 158 kg, was caught by Chinese longliner Rong Da Yong. Dead, it was dumped overboard, but not before the tag was collected and posted away to redeem a US$20 reward.

“I wonder why we even bother; they get slaughtered by the tuna longliners. The longliners north of us are stripping the tuna. They are taking the whole base chain out of the ocean.”

A European Parliament report on China says the “activities and catches of the Chinese distant water fleets are almost completely undocumented and unreported, and often … may actually be illegal, thus spanning the entire gamut of IUU fishing”.

China’s plunder is global but I will only use one incident to illustrate it, if only because I had a modest involvement in it, thanks to my book The Catch. Rumour was about that Chinese boats were near the search zone for the Malaysian Airlines’ missing MH370 in the southern Indian Ocean. Research suggested they were longliners and Sea Shepherd’s MV Steve Irwin, with the soft spoken Bengali Sid Chakravarty on the helm, went for a look. They found Chinese flagged Fu Yuan Yu 76 using a hundreds of kilometres-long driftnet, killing everything in its path.

They were flagrantly violating a 1991 United Nations resolution banning driftnets longer than 2.5 kilometres. New Zealanders should feel affronted: the UN ban derives from the 1989 Wellington Convention banning South Pacific driftnetting. That convention was the product of Geoffrey Palmer.

Fu Yuan Yu ran with Sea Shepherd chasing. As they near China the People’s Liberation Army Navy showed up. The story is still playing out.

In March the Argentine Navy sank a fleeing Chinese squid boat Lu Yan Yuan Yu 010 which had refused to stop after being caught fishing in the EEZ. Beijing has threatened retaliation.

The same month, Indonesia tried to arrest a Chinese fishing boat caught off the Natuna Islands. A China Coast Guard cutter rammed the Indonesian vessel, preventing it from making an arrest. Beijing say the place is their “traditional fishing grounds”.

And this is could be the fate of the South Pacific.

The hundreds of boats, crewed with cheap South East Asian labour and tanked up with subsidized fuel, are not actually profitable. Their strategy is to build up a presence ahead of the time South Pacific nations wake up and want to protect their waters. The Chinese will show their “fishing record” and before you know it, even the Lau Basin, between Tonga and Fiji, will have become Beijing’s “traditional fishing grounds”.

New Zealand and Pacific nations are hoping that electronic technology will frustrate China’s IUU fishing. They can get observers onto the bigger purse seiner boats, but few observers are willing to travel on the smaller, rougher longliners. They have transponders on the longliners so they know where the boats are likely to be (even if they get switched off a lot). Now the idea is remote-controlled cameras on longliner decks.

Beijing has mostly purchased South Pacific political silence over the issue. There is a strong and rank stench of corruption in many a capital as well. The region needs new leaders ready to challenge China over what it is doing.

And our politicians and diplomats should be speaking out, embarrassing the Chinese, backed with a better stick: a significantly improved Defence Force capability out in the South Pacific and Southern Ocean.

While Wellington is fond of lending one of our two frigates to the Red Sea pirate patrols, the navy’s fisheries work is pathetic. This was proven in January last year when a boarding crew from the offshore patrol boat HMNZS Wellington sought to board one of three toothfish pirate ships in the Southern Ocean.

Its Spanish skipper told them to bugger off. Short on fuel and having fired off most of their ammunition in target practice a week earlier, the navy meekly obeyed. Sea Shepherd did the job.

The air force’s P3K Orions are terrific at Pacific patrols, but they seldom fly them. Short on crews and budget restraints, their time is mostly spent on search and rescue. Refighting the Cold War, they actually still go looking for submarines now and again.

The message should be that the Chinese threat is not under the water; it’s on it. How long before the PLA Navy sends vessels out here to support their fishing fleets like they do in Indonesian waters?

We need more aircraft or even long range drones.

The New Zealand Defence Force – now passively describing itself as a “force for good” – needs new Pacific range capable vessels. Not just the two we have now, but a fleet of them. We need to be seen out there, boarding, inspecting and making it clear that the waters are the “traditional fishing grounds” of the people of the Pacific.

Fishing skippers need solid grounds to believe that their chances of being boarded and inspected are high. Right now the odds of it happening are up there with seeing the Great White Whale.

And why should we worry about the wider Pacific?

It’s intriguing to look at what happens near the Kermadecs, about to become one of the world’s biggest marine sanctuaries. Just outside the EEZ, Chinese and Spanish (an emerging but still small fleet here) longliners “fish the line”, taking as much of the migratory tuna that they can grab before it reaches New Zealand’s safe waters.

We are being too friendly to folk who are trying to invent a new right to steal the Pacific’s common wealth.