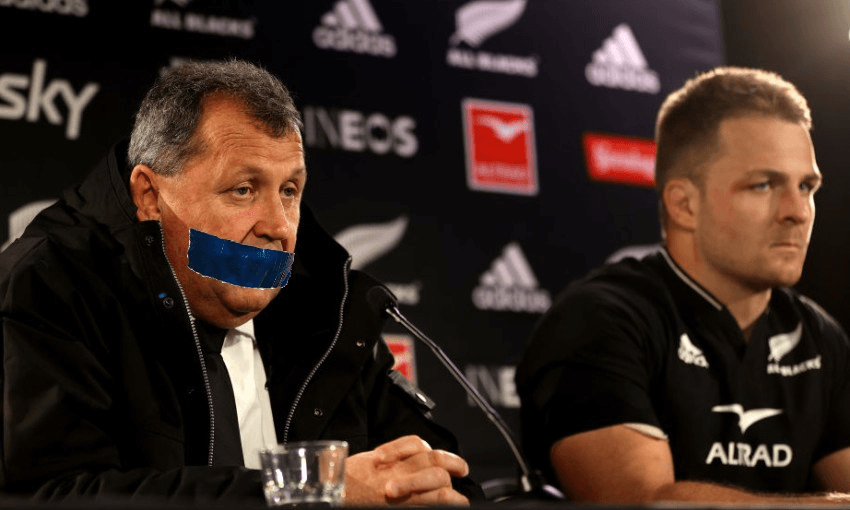 Photo by Phil Walter/Getty Images. Tape by The Spinoff.

Photo by Phil Walter/Getty Images. Tape by The Spinoff.
Satire (or is it?)

Everyone was too critical about the All Blacks last weekend and now there’s no more rugby, writes Scotty Stevenson.

New Zealand Rugby communications executive Jo Malcolm has cancelled the first test between the All Blacks and South Africa on account of the fact the All Blacks coaches, players, bus driver, management, logistics team and attendant hangers-on aren’t quite ready to face such a stern test of their chops.

Fresh from Malcolm’s remarkable and poorly-constructed Linkedin revelation that “it was my decision, not Ian Fosters, not to front” for the traditional post-test coach’s press conference on Sunday, it is believed Malcolm has cited some general bad juju in the marketplace and an inability to stop the media from writing really, really, really bad stuff about the All Blacks and New Zealand Rugby as the final straw that led her to cancel the much-anticipated match.

It’s understood the test match will be rescheduled for a date when media and fans will be nicer to the handsomely-paid professionals playing and coaching the national game at the highest level.

It is believed Malcolm became incensed last week when several media outlets in New Zealand had the temerity to run write-offs of a column penned by respected British rugby commentator and columnist Stuart Barnes. In the column in question, Barnes was highly critical of All Blacks captain Sam Cane, and Malcolm was having none of the standard media practice of taking overseas coverage and reprinting it for local audiences.

At least one journalist spoken to for this column said, “What the actual fuck was that?” What the fuck was that, indeed?

It is understood that given the fact New Zealand Rugby don’t give journalists anything unless they do as they are told, the major media outlets all burned one intern on a stake as penance, and offered up the next newborn child delivered within their respective organisations as a ritual sacrifice at the next NZR board meeting.

Malcolm made the arbitrary call to cancel the next test on Linkedin, which NZR claims is “the best and most cost-effective way to reach a younger audience”. It is understood that advice has come from Stewart Mitchell, the septuagenarian Chairman of NZR who knows a thing or two about networking, young man.

Strangely, Malcolm chose to make the announcement as part of her response to a former NZ Rugby staffer, Mike Jaspers, who claimed the “correct comms approach is not to duck the difficult questions unless you really are hanging up your boots”. Jaspers also worked for prime minister Jacinda Ardern, who has never dodged a question before and does not surround herself with a phalanx of communications professionals.

Having clearly had a gutsful of the scrutiny faced by the coach and captain of the most well-known sporting team in New Zealand, one which claims to be the most dominant rugby team in the world, and one that has just pawned a share of its revenues in perpetuity to a private equity fund, Malcolm did not beat around the bush.

“The media didn’t want answers,” she declared. “They wanted a coach to step down.”

Not on Malcolm’s watch. Foster and Cane are going nowhere. On this point she seems adamant, and that conviction may yet keep the coach in his job. He’s not important enough to be told that his own press conference is shitcanned, but then again, what man really understands what’s good for him?

It seems, too, that from now on, Malcolm could well do without the post-match press conference as well as the post-test, next-day press conference. She makes this abundantly clear in her complaint that the media “wanted insight and analysis 25 minutes after the final whistle.”

The nerve! Consider yourself on notice, press corp. If you want insight and analysis then wait until the following day. Actually, no. Hold on.

Anyway, this is what you get for being mean. You’ve brought it upon yourselves. All you people out there who have dared question the performance of the national rugby team, all you fans who have shelled out for your television subscriptions, all you armchair warriors wearing your All Blacks jerseys and beanies and jackets and scarves.

But mostly all you media people with your endless questions and your storylines and your genuine inquiries and your years of experience covering the “national game” and bringing it to life in words and pictures and sound, you should be ashamed most of all.

The next game is definitely off, and if you are not careful, Malcolm will cancel the one after that, too. And you won’t have another test match until you can all behave yourselves and do what you’re told. I am warning you, you have had your fun now get back to toeing the line and telling the people what they want to hear. There is nothing to see here. Please disperse.