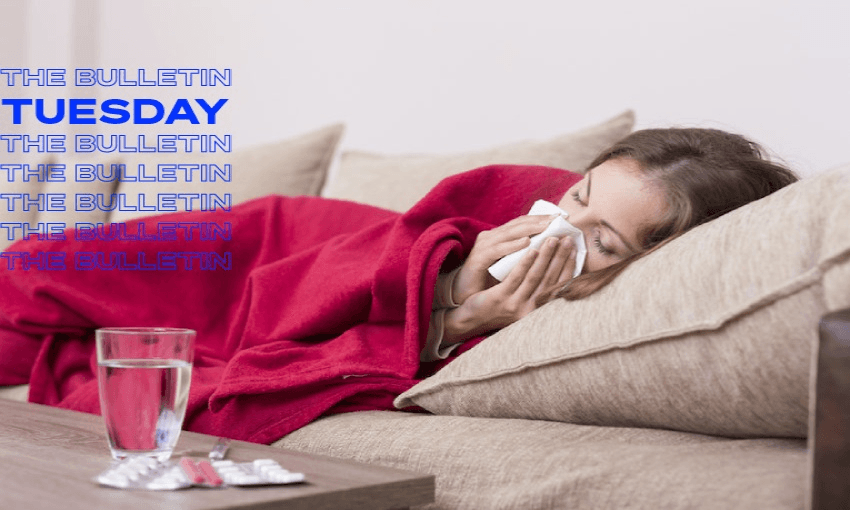 Health experts are worrried about a twin or tridemic this winter (Image: Getty Images)

Health experts are worrried about a twin or tridemic this winter (Image: Getty Images)

For two years we’ve been told to stay home, rest and recover but what happens when sick leave runs out and workforces are strained by absenteeism, asks Anna Rawhiti-Connell in The Bulletin

As winter approaches, health experts are worried about a possible twindemic, or even tridemic of respiratory illnesses. There is a review of the traffic light setting today and officials are working with modelling that say a third of hospital ward beds in the country will be occupied with respiratory illnesses over winter. Covid cases in Auckland have risen by 75% in the last four weeks. After two years of very low levels of influenza, shut borders and lockdowns minimising possible spread, there are signs of a big flu season underway in Dunedin already. Director of the national influenza centre, virologist Dr Sue Huang, spoke to Kathryn Ryan yesterday, and said they are expecting a very busy season of winter illnesses and that we need to be very careful and very prepared.

In a blog published on Friday, a group of public health experts from the University of Otago are asking the government to create a Covid action plan for schools as a precaution for winter. They want it to include isolation for all close contacts of cases. The problem? Teachers would need more sick leave to do it. NZEI Te Riu Roa primary teachers’ union president Liam Rutherford says teachers are already struggling to take the mandated time off for household contacts. “We’re only a quarter of the way through the year and we’ve got people who’ve already used their sick leave.”

People away from work due to sickness up 67%

For those who can’t work from home, the questions about sick leave entitlements are only going to get louder over the coming months. We know the number of people who gave sickness or injury as a reason for being away from work was up 67% in the March 2022 quarter. What happens if people run out of sick leave? Countdown staff have already launched a petition asking for a Covid leave policy to be reinstated. For those of us who can work from home, hybrid work can create a kind of limbo – lines between work and home blur. We can technically work while sick.

For two years we’ve had this new, healthy narrative about staying home, not because we don’t want to face anyone full of snot but because it’s right not to spread infection to others. We’ve also been told to rest and recover after getting sick, especially as a way to prevent long Covid. American writer, Anne Helen Peterson has just written this about the normalisation of working through Covid in the US. Our new understanding of illness and infection should be pushing us away from this. In the face of dwindling sick leave entitlements and pressure on workforces as more people get sick, the question now is whether it’s an approach that can be sustained.