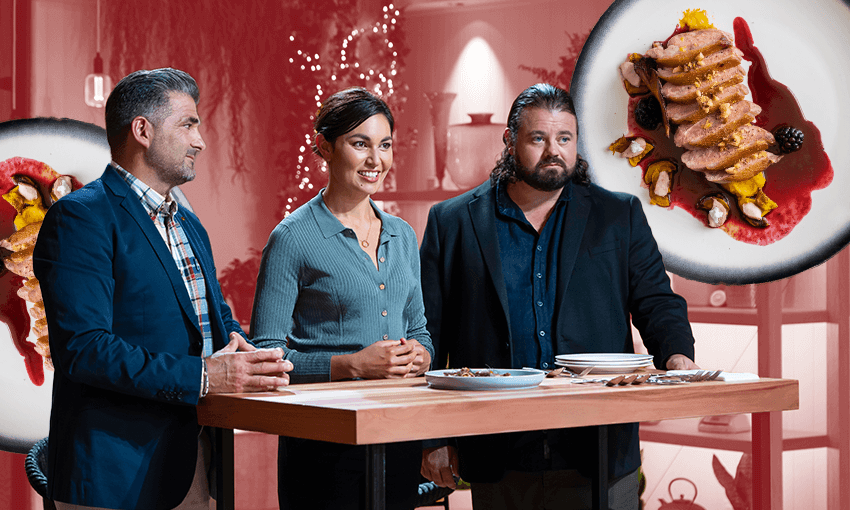 Everything we’ve learnt about the Masterchef NZ contestants so far

After week one, 14 of our finest home cooks remain in the running to become Masterchef NZ champion. Here’s what we know about them so far.

We’re only three episodes into the new season of Masterchef NZ, but already 13 people have been sent home, the show has been publicly accused of being “fake and false” and Nadia Lim has winked more times than we can count. If this season achieves nothing else, at least it’s brought the wink back into the spotlight. A Nadia Lim wink is the equivalent of a Paul Hollywood handshake on Bake Off – it must be protected at all costs.

It’s been six years since Masterchef NZ was last on our screens, and this new season began by taking  27 contestants to Walter Peak Station, near Queenstown. As the saying goes, too many cooks spoil the opportunity to make a tightly constructed reality television show, and as we sat through 27 nervous cooks creating 27 signature dishes, I wondered 27 times why nobody chose a cheese toastie as their signature dish, given a 500g block of Tasty is one of life’s true delicacies these days.

While Masterchef NZ features a wonderfully diverse group of contestants (Lego Masters NZ, take note), 11 cooks were sent home by the end of episode two. Two more were sent packing in episode three, with the bottom 10 chefs competing in an elimination challenge involving a mystery box of local cuisine that included wild rabbit sourced from Nadia Lim’s own farm.

That’s right, Masterchef NZ’s 2011 winner is now the show’s head judge, and she might just be the best thing about this series. Lim’s a local who understands the importance of “gate to plate” cooking, and her Masterchef NZ experience means she can empathise with the cooks as they ride the reality TV rollercoaster. Most importantly, her cheeky winks work in every situation, from “bring me your dodgy-looking meal” to “I love cheese toasties too”.

In fact, there’s plenty of intense eye-related drama this season, as Lim’s fellow judges, Vaughan Mabee and Michael P Dearth, love to stare down the cooks while they chew their food. Look, there’s nothing relaxing about Masterchef NZ, but the winner gets $6,000 of appliances, a cookbook deal and six months worth of New World groceries. Imagine how many cheese toasties you could make in six months. Incredible.

Here’s what you need to know about the 14 chefs who remain in the competition.

The judges went wild for Alice’s ginger cake, with Nadia calling her the best student cook she’d ever seen. Big call, given Nadia didn’t partake in my flat’s sausage casserole extravaganza circa the early 2000s, but it’s fine. Alice finished her masters of politics two days before Masterchef started, and wrote a food column called “Fuck, I Can’t Cook”. Fuck, I think she can.

Jason grew up in the back of a butcher’s shop, and now he’s whipping up “venison with dehydrated mushroom dirt”. It’s no free cheerio when you buy your mince, but who doesn’t like a bit of dirt with dinner these days? Chef’s kiss, indeed.

Originally from South Africa, Rudi’s signature dish featured blue cod, a delicious fish that came 54th in The Spinoff’s fish rankings. Thankfully, Rudi has already done better than 54th on Masterchef NZ, so we’ll take our wins where we find them.

The judges called the two-time New Zealand latte art champion’s signature dish “outstanding”, even awarding him the first “moist” of the competition. Bravo.

Naomi loves using a blowtorch in her cooking, and she’s not the only one. “I’ve blowtorched a lot of things,” judge Vaughan admitted. How come when I burn dinner it’s “annoying”, but for these guys it’s fine? Anyway, Naomi’s passion for cooking impressed the judges big time.

Rachael entered Masterchef not just for herself, but for her whole whānau. The judges adored her signature pāua pie, with Michael calling it “pāua-ful” and Nadia declaring Rachel’s cooking “joyful”. Love to see it.

Michael loved Amberley’s use of – wait for it – salt and pepper in her elimination challenge. Vaughan reckoned her sauce had “good bones”, which is the ultimate of sauce-related compliments.

Felina hit the headlines this week after she alleged her experience on Masterchef NZ amounted to “psychological manipulation”. Warner Bros Discovery has refuted her claims. Felina’s cooking was less controversial, with the judges enjoying her signature dish and praising Felina for “cooking according to her landscape”.

He owns a gin company! His signature dish got him into the top six! He calls himself a “cheeky chap who loves to cook”! Triple threat, right here.

She’s the youngest in the competition, but while everyone else faffed around with duck and rabbit in the elimination challenge, Farzana made a walnut cake that wowed all three judges. One to watch.

With a Japanese mum and a New Zealand father, Hana’s cooking celebrates both cultures in her life. Nadia called her signature dish “bold and interesting”, and she was one of the top six cooks who avoided the elimination challenge.

Alex hates following cooking rules, yet her signature dish was one of the “sexiest” dishes the judges had seen. Nadia called her a smart cookie, Michael said it made him weak in the knees, and Vaughan told her to “go forage something”. Advice to live by.

Lance reckons his tenacity will take him a long way in the competition, but sadly he ended up in the bottom two of the elimination challenge. You’ve got this, Lance. We believe in you, Lance. Be the sauce you want to be.

This high school teacher loves to forage, hunting and gathering all her ingredients. Anyone know where you can forage a 500g block of Tasty cheese? Asking for a friend.

Masterchef NZ screens on Three on Sunday, Monday and Tuesday nights, and is available to stream on ThreeNow.