Long-time fans Jane Yee and Tara Ward discuss the love, life and laughs of the first two episodes of The Bachelorette NZ.

Tara Ward: Meet me on the red carpet of your wildest dreams Jane Yee, because it’s time to recap the new season of The Bachelorette NZ, New Zealand’s most pashiest reality series. I’m ready to discuss every pathetic platter of cheese slices and every burning moat of socially distanced candles, as well as our new bachelorette and her eager bachelors.

Listen to The Real Pod for more weekly The Bachelorette NZ chat – subscribe on Apple Podcasts, Spotify or your favourite podcast provider.

Jane Yee: Oh hey, howsit. Wanna learn a cool handshake that I do with my closest friends and also literally every other person I ever meet?

TW: I will accept this handshake, because from now on I’m channelling bachelorette Lexie. She says yes to every opportunity, including sweaty handshakes and giant cuddly koalas, and seems a natural at being on the telly. In fact, I think I fell for her the moment she had a casual convo with her dad that included the words “you mean the poo thing?”

JY: I’m all in on Lexie. She’s a raging babe and seems super open to the whole wild ride. In stark contrast to Lesina from the first season, she appears confident and able to drive conversations and doesn’t spend 70% of her screen time giggling nervously. The moment she said she’s obsessed with dogs is the moment I became obsessed with Lexie. Re the poo thing, I am certain that Dad knew his camera time would be short lived and that he had to make it count. I’m really chuffed he decided to go with coffee made from cat poo for his moment in the spotlight, I swear no one ever made such an impact in such a short space of telly time. And yes, I have Googled coffee made from cat poo and yes, it is a thing. Give him a rose imo.

TW: Love a bit of cat poo coffee, love a bit of a wonky collar on host Art Green. WHAT was going on? I didn’t want to look directly at it, yet couldn’t look away.

SADLY ART GREEN’S COLLAR IS NOT HERE FOR THE RIGHT REASONS.

JY: Art’s collar was the 19th bachelor awkwardly hanging about waiting for someone to fix him. It was an ungodly combination of a foldless collar and trouser waistband, complete with belt loops to ensure his bowtie didn’t ride up. I’m sorry Art’s collar, you did not receive a rose, it’s time to say goodbye.

TW: I also loved Art telling Lexie he was “shitting his pants” on his first night as The Bachelor. I could never imagine Chris Harrison saying that. Other questions I had about the red carpet arrivals: why are the men’s trousers so short? Should a floaty dress be so near those candles? If social distancing meant Lexie couldn’t hug the bachelors, how come Bradden’s handshake made it through quarantine control?

JY: It’s wild that while Art talked about metaphorically shitting his pants, Dave talked about actually shitting his pants… in a library. I don’t want to get sidetracked, but whenever I hear about people shitting their pants I immediately imagine myself in that situation and start trying to figure out what I would do. I’ve yet to find a satisfactory way of dealing with that seemingly inevitable circumstance. Should I start carrying wet wipes, a plastic bag and a spare pair of underwear at all times?

TW: What would Lexie do?

JY: Oh my god, you’re right. This is my new mantra. Lexie would laugh it off and everyone would be charmed. 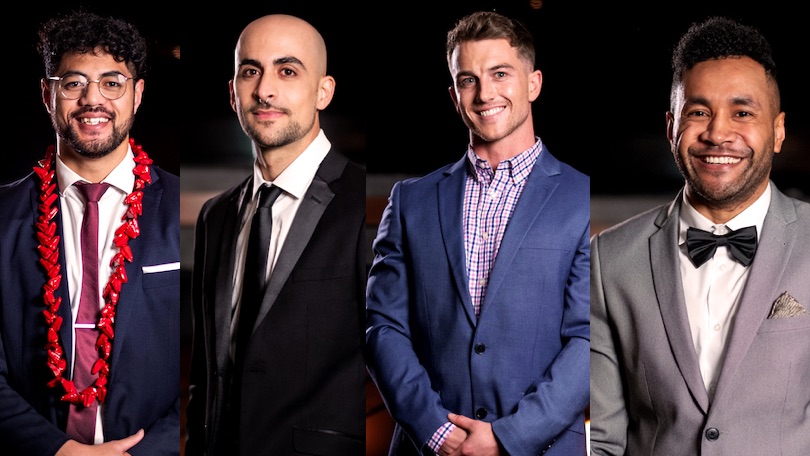 THE UNLUCKY BACHELORS OF WEEK ONE: JARROD, ITAY, BRADDEN AND BEN.

TW: Speaking of charming, 18 single blokes climbed out of the limo and four got back in hours later: Itay, Bradden, Jarrod and Ben. Jarrod’s cocktail party snooze wasn’t a good sign and Bradden missed out on a goodbye handshake, but you know what did bode well? The delicious roast that chef Paul whipped up in episode two. Lads lads lads, spuds spuds spuds.

JY: I’m never remotely attracted to any of the bachelors on night one, but come ep two there’s usually an eligible bach I’m starting to warm to because he looks better in his civvies. I’ve been in this game long enough to know that by the end of the season I will be in actual love with at least four contestants. First cab off the rank on the ride to my heart is Jack. Such a lovely face and beautiful hair.

As for the roast, I’m forever hungry and that spread had me mentally booking a trip to the local roast shop for dinner tonight. Especially when the other option is to go canyoning. No thank you. Bloody great move getting a chef in the house, god knows production aren’t qualified to feed the masses. Did you see the night one cocktail party snacks? Crackers with a slice of cheddar and tomato on top. Don’t get me wrong, absolutely yum, but they did bring down the tone a touch.

WHAT ARE YOU TALKING ABOUT? THIS IS YUM.

TW: What were your highlights? I loved the New Zealand vibe – Joe rocking up to his one-on-one date in jandals and shorts, the awkward silences, Hamish’s laughing montage. My favourite moments were Jack giving Lexie a photo of Suzy Cato, and Hamish accepting Lexie’s rose with a classic “cheers”. More Kiwi than a cat poo coffee.

JY: Top of the list has to be when Dave nearly shat his pants for (at least) the second time in his life upon seeing Melanie Bracewell stroll onto set for the comedy challenge. I love it when Kiwi celebs are met with superstar reactions. On that challenge, have you ever seen attempts at comedy miss the mark by such a great margin?

TW: Matt’s decision to juggle lemons during a joke-off proves that when life gives you lemons, you should get out of the comedy ring and have a nice cheese platter instead. The lads saw the funny side, because they’re having the time of their bloody lives in that mansion. So much banter, so many cannonballs. The classic Bachelorette NZ combo. 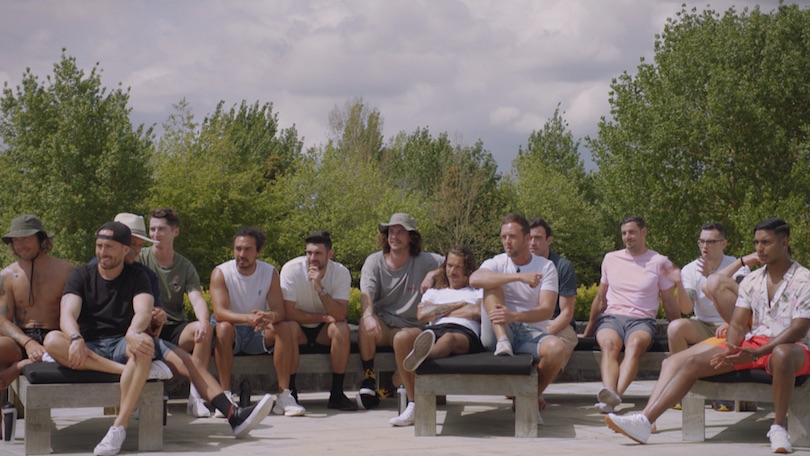 Lads, lads and even more lads.

JY: The lemon juggling wasn’t the only questionable talent on display. I give you busting open a raw egg and scoffing it apropos of exactly nothing at all. Such a gloriously bizarre fight or flight response to the horrible challenge. I’m with you on the lads having a cracking time though, it was a strong theme of last season and history is repeating. They might not walk away with true romance but they’re definitely walking away with true bromance.

Now, let’s talk Vaz. Aka Alex from Heartbreak Island who thinks he can fool us by using his last name as his new moniker, but that naked torso is a dead giveaway. Did he forget to pack tops?

TW: This is a mystery that cannot go unsolved, and we must go directly to the source of all knowledge: THE MOLE. Who is she? Does she look like Lexie’s sister because she is indeed Lexie’s sister, and what did she do with the rest of Vaz’s luggage?

WHO IS SHE AND WHAT DID SHE DO WITH THE CHEESE PLATTERS?

JY: I’d love for the reveal to be that the mole isn’t just Lexie’s sister, but also the second bachelorette! A girl can dream, right? I do love how they lean in so hard on the mole device, and how Jodie Rimmer treats us like absolute idiots in voiceover. “That driver sure is asking a lot of questions.”

TW: So many questions, so few answers, but a heck of a first week, right? Weird collars, cheese slices and a fabulous Bachelorette. What more do we need? Until next week, Jane.

JY: I shall wait patiently like a candle on a red carpet.