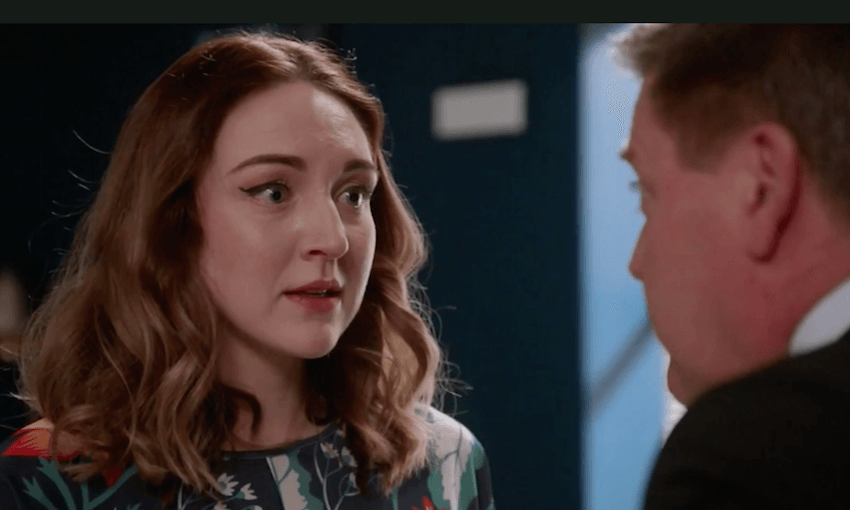 On Monday night’s episode, Chris advised Zoe that her baby might have medical issues – which has caused outrage.

On Monday night’s episode, Chris advised Zoe that her baby might have medical issues – which has caused outrage.

On Monday night’s episode, Chris Warner raised the possibility of a woman aborting her child because of potential medical issues. Controversy ensued, which says a lot about Shortland Street‘s place in our culture, writes Sam Brooks.

Shortland Street has been a key part of New Zealand culture for 26 years. Whether you watch it or not, you’ve certainly heard of it, with approximately 360,000 people in the country watching it as of the end of last month. That’s nearly 10% of our population which is a huge saturation rate for any piece of media. You might love it, you might hate it. You might hate it but still watch it. Or it might be that annoying thing you can’t imagine is still on.

Either way, it’s been playing in a huge amount of the lounges five nights a week, 40 weeks a year, for the past two and a half decades. It’s a mainstay, regardless of whether you participate in it or not.

On Monday night, Chris Warner had a discussion with a pregnant Zoe Carlson about their unborn baby. He cautioned her that their baby might be born with a range of medical issues, including Down syndrome, and suggested that because of where she is in her life and how much the baby would change her life, that she might consider aborting the baby.

The response was swift, understandably hurt, and 100% reasonable. Kim Porthouse, spokesperson for the New Zealand Down Syndrome Association, said the storyline “reinforces a lot of the prejudice that having a child with Down syndrome is a burden” and was “appalled by the insensitive and ignorant storylines”.

I’m not here to litigate or take sides here. There’s no question in my mind that Shortland Street‘s writers knew this would be controversial material and there would be a backlash to it at some point. Shortland Street is a piece of art, regardless of whether you like it or not, and it’s one with huge cultural cachet and mainstream appeal in this country. People are entitled to whatever response they want, and I’m happy to stay in my respective lane here.

Porthouse also said: “What is worse is that a lot of our young people with Down syndrome absolutely love Shortland Street and suddenly one of their heroes tells them their families would have been better off without them.”

And this, readers, is where Shortland Street is different.

Shortland Street is straight up, one of the most progressive pieces of mainstream fiction we’ve ever had in New Zealand. It’s been responsible for more representation of women, minorities, people of colour and difficult topics (abortion, grief, same-sex marriage), and it’s all been done from the 7:00pm timeslot for more than 25 years. It infiltrates our households on a nightly basis and confronts its audience in ways that our most supposedly groundbreaking art can’t ever hope to. It’s New Zealand culture’s biggest trojan horse.

Yeah, it’s a silly soap opera. Don’t get me wrong, Shortland Street is incredibly silly. I remember when Nicole married herself and I remember a legit evil twin plotline. The Ferndale Strangler, you guys! These are things that few people are going to be offended by because they’re not going to confront these issues in real life.

But when Chris Warner, the man with as many children as he has jowls, advises a woman to potentially abort a child that might have issues, it feels real. This guy has been in our lounges for 25 years. He’s one of the good ones. He’s meant to be our ally. He’s the nation’s uncle whose weddings you stopped attending because he’s a messy bitch who loves a bit of drama.

In the same way that when a famous man whose work you’ve admired is found out to be a sexual predator or a big ol’ racist, it can be jarring when that character expresses an opinion or takes a course of action that’s morally reprehensible to you. If a villain expresses, it’s fine. They’re a villain. We’re not meant to like them.

But we’re meant to like Chris. That’s why he’s still there, presumably. The reason why this is news, and why Shortland Street makes headlines whenever it steps out of line – the reason why people get upset – is because with Shortland Street, it feels more personal. It feels more real because for 110 minutes a week, we’re intimately involved with the character’s lives. It’s not just a random dude on the street yelling a slur, it’s like a friend yelling a slur.

So when they strike out at us – seemingly in surprise – it strikes deep.

In some ways, it’s a strange backhanded compliment to Shortland Street that a storyline – and a moment – like this is responded to not with complete dismissal, but with real hurt and genuine offense. The audience feels a sense of genuine ownership over the show.

When you’ve been in somebody’s lounge for as long as Shortland Street has, you’re expected to be on the lease and to start taking responsibility. And to stretch my metaphor, if you cause damage to the property, you better fix it.