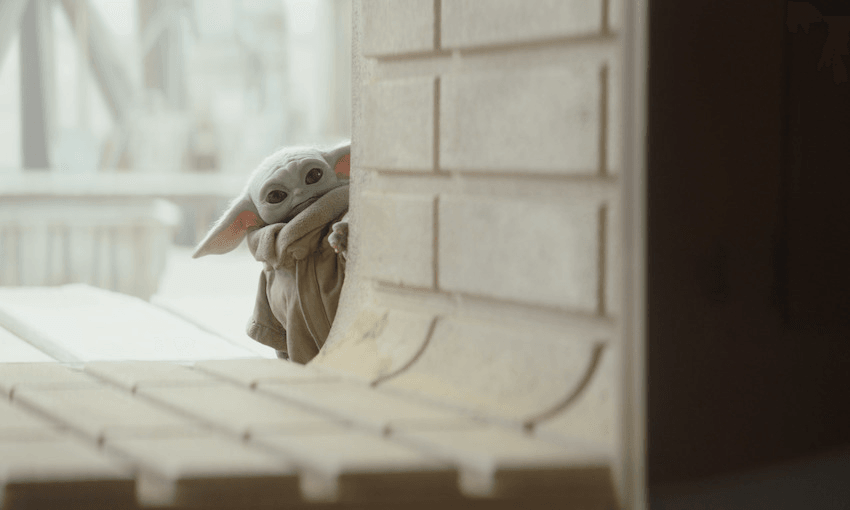 It’s The Child aka Baby Yoda, in the second season of The Mandalorian. (Photo: Disney)

Review: The Mandalorian is proof that Star Wars’ future is in TV

It’s The Child aka Baby Yoda, in the second season of The Mandalorian. (Photo: Disney)

The second season of The Mandalorian is more of the same, but it’s also a signal of where the world’s biggest franchise is headed, writes Sam Brooks.

When The Mandalorian debuted on Disney+ last year, nobody could have predicted how truly huge it would come to be. Not only was it actually pretty good television netting a surprise Best Drama nomination at the Emmys, it created one of 2019’s most recognisable characters: The Child, more commonly and most incorrectly referred to as Baby Yoda. The series even eclipsed The Rise of Skywalker, which brought the sequel trilogy to a spluttering close. For Star Wars, one of the biggest franchises on the planet, it was clear where the future lay. Sorry Rey, your time is over. We’re following Mando now.

The Mandalorian is more than just Baby Yoda, though. The series is set between Return of the Jedi and The Force Awakens, and follows the Mandalorian (Game of Thrones’ Pedro Pascal), colloquially known as Mando, who hails from a once-great warrior clan who pledge to never take their armour off around others. Now, since the rise and fall of the Empire (thanks Darth Vader!), the clan is scattered across the galaxy, serving as bounty hunters and bodyguards. Mando is one of these bounty hunters, and the first season focused on a simple job gone awry: Mando must deliver a package. That package? Baby Yoda. Hijinks, and an entire season of television, ensued.

The second season doesn’t feel markedly different from the first. It’s a piece of Star Wars content, produced by Disney. You can see every dollar spent on the screen, whether it’s in the gorgeous deserts of Tatooine, or the action scenes that seamlessly blend cutting-edge visual effects with practical action. More pleasingly, the second season continues the trend of booking offbeat guest stars who turn in vivid, if not especially layered, featured performances. Amy Sedaris, a highlight of the first season, returns in episode one, but the main guest star is an unnervingly well-preserved Timothy Olyphant, doing a very clear riff on his long-running role on Justified. (There’s also a cameo that… well, if you haven’t found out by yet, I won’t be the one to spoil it.)

One of the key factors in the success of The Mandalorian’s first season is that it wasn’t like anything else on TV. It felt very much like a Western, each episode its own self-contained arc where fun guest stars could show up, make an impression and then leave, while Mando’s tale meandered from point A to point B. It was less about concluding that tale than about spending time in the world George Lucas created in the 70s and countless others have built on since. The closest comparison I can make is Xena: like that show, character development takes a backseat to the uncomplicated pleasure of seeing characters you like romp around in a fun world. There’s less implied lesbianism in The Mandalorian, though.

Season two doubles down on this approach. Each episode contributes to the world of Star Wars, and specifically to the strange ensemble forming around the Mandalorian, rather than building a strong narrative. It’s a gamble, but it’s one that pays off well: plot has never been the franchise’s strong suit, but the house that Lucas built is strong. There are nearly 50 years of lore for the series to draw on – with a few fan favourites set to appear this season – and The Mandalorian seems more than happy to do so.

It’s hard to watch The Mandalorian without thinking about fanservice, which is when creators are aiming to appeal to fans by pandering to what they want, rather than serving the story they’re actually telling. There’s conspicuously more Baby Yoda this time around, and the audience I watched it with was audibly delighted with every single reaction shot from the little green fella. The Mandalorian knows why people are tuning in. Every Star Wars film since the first has been about fanservice to some extent, but the last decade has really kicked that into overdrive. The franchise isn’t just serving the fans now, they’re in service of the fans. The Last Jedi and the surrounding discourse, if you can even call it that, showed us this. Not even The Mandalorian can kick the franchise’s need to serve the fans, and it’s hard for the pandering not to pull you out of the action occasionally.

Perhaps the most interesting thing about the series, though, is how it signals, in a huge way, where the future of Star Wars lies. It’s not in the films, which haven’t had a universally positive response since Empire Strikes Back, and have created a culture around them that is so toxic it could be a Jane Lynch meme. No, Star Wars’ future lies in television, even in gaming. For nearly a decade now, the most universally praised entries in this universe – The Old Republic, The Clone Wars, Rebels, hell, even The Mandalorian – haven’t been films, but everything that fills in the gaps left by those films.

The universal praise makes sense. Television and gaming have the luxury of time – time to develop characters, and to dig into lore the films could only set up but never really pay off. Take animated series The Clone Wars, which touched on the lives of many characters introduced in the prequel trilogy, including fan favourite Darth Maul, and was able to show the full scale of a war that three films could only glance at. Even more crucially, these series and games don’t have to deal with the massive burden of being The Next Star Wars film, and all the fan scrutiny that label comes with.

Where The Mandalorian succeeds, and it’s maybe the first Star Wars product since the original back in 1977 to clear this bar, is that it can stand alone. Think of it like a fine wine. If you know your shit, then you can appreciate the different notes, where it comes from, and the journey it’s taken to get there. If you don’t, then it’s just a really good glass of wine. The Mandalorian is the same: if you know the lore, you can appreciate everything it’s doing to fill out the world. But if you don’t? There’s still Baby Yoda, a dude in shiny armour, and some super fun space swashbuckling.

The Mandalorian drops every Friday weekly on Disney+.

'I did ballet from age four till six. An iconic run.'
By FIRST
📺