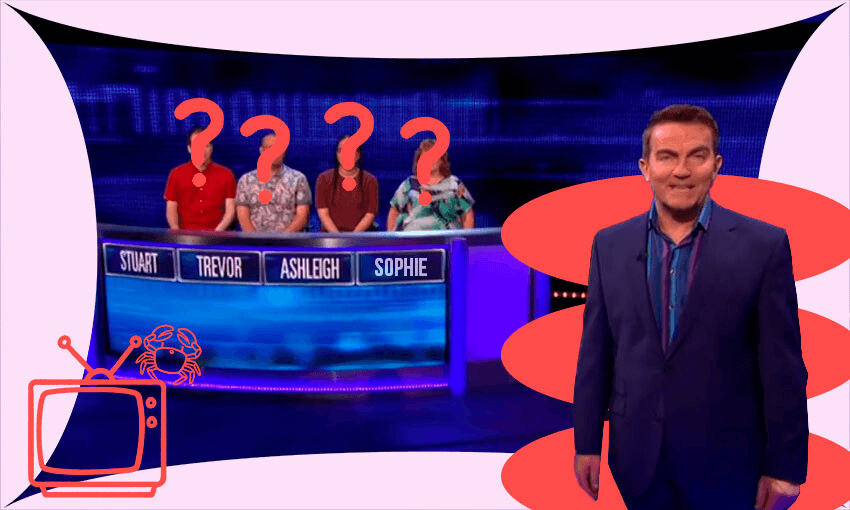 A brave New Zealander shares her story: ‘I auditioned for The Chase and didn’t get in’

Sophie Pringle went where few of us will ever go: to a live audition for The Chase. It didn’t end well. She told her story to Tara Ward.

The closest most of us will ever get to The Chase is watching it twice a day, seven days a week, even with our faces smooshed up to the screen. Not for avid game show fan Sophie Pringle, who went where few New Zealanders have gone before. Pringle is one of the lucky few to audition for The Chase, enjoying a rare but crushingly brief glimpse of what goes on behind the show’s quizzy curtain.

Pringle’s childhood dream was to be on a TV quiz show, and when she moved from Christchurch to the UK in 2017, she grabbed the opportunity to appear on an upcoming season of The Chase. After submitting an application online, a casting agent called to ask Pringle a few basic questions about herself, and decided she was a good fit to progress to the auditions.

Then Pringle received an email from The Chase with all the audition details. It may look like a humble Word document with a jazzy text box, but those two sheets of A4 were Pringle’s ticket aboard The Chase train, destination quiz show heaven.

The auditions were held in a conference room at the Hilton Brighton Metropole, a long way from the glitz and glamour of the ITV studios. Pringle arrived with high expectations. “I was sort of thinking, oh, maybe Bradley will be there, or one of the Chasers,” Pringle remembers. “I got very excited, but none of them were there and I didn’t recognize anybody.”

Undeterred, Pringle joined a group of 20 fellow hopefuls who were put through a mock episode of The Chase. They had to answer a quick fire round of trivia questions with a pretend buzzer and tell the five producers about themselves, all of it filmed on camera. It was Almost The Chase, held in a random hotel on England’s south coast, and Pringle was in her element.

“There were four of us going up at a time, and I absolutely killed it,” Pringle says of her audition. “I was pressing my buzzer, I got the most questions right out of anybody.” When the producers asked why she wanted to be on the show, Pringle replied “to meet Bradley Walsh”, which is indeed the correct answer. The whole process took about 45 minutes, and by the end, Pringle was feeling more confident than The Beast during a one question shoot out.

“I was being super charming. I had the producers in the palm of my hand. I felt like I was massively killing it, and everyone was laughing at what I was saying. I was doing real well, I thought.”

The producers, however, had other ideas.

When the audition was over, they announced the group would be split in two. When the producers spoke to Pringle’s group, they had only bad news. Pringle had been caught. For her, The Chase was over.

“It was absolutely heartbreaking,” Pringle says of the devastating moment when she realized she hadn’t been successful. Only six people from her group were shortlisted for the next round, and years later, Pringle remains mystified about why the producers picked the contestants they did.

“They chose this old woman who didn’t answer any questions right. Not one. She was really boring when they were talking to her. Then there was this young mum, she was a bit of an idiot as well, and then two older men. It was really weird.”

It made less sense than the time The Dark Destroyer lost the Final Chase despite only needing to answer 11 questions correctly. “I went back to work, and I had to tell everyone that I didn’t get in,” Pringle says of that fateful day. Producers mentioned they were casting 12 months in advance, and Pringle was left wondering if she missed out because A) she was on a temporary visa and might not be in the country in a year, B) The Chase doesn’t feature many non-British contestants, or C) none of the above.

Pringle never saw any of her fellow auditionees ever again, either in real life or on the television. The pain still cuts deep, and she can’t deny the experience hasn’t changed her feelings about her beloved game show.

“Well, I still watch it,” she says, “but you know how at the end when Bradley always goes ‘right, come and have a go if you think you’re clever enough’, I always yell at the TV, ‘I did, and you didn’t bloody pick me’. My partner is like ‘oh my god, it was four years ago, let it go’.”

“I will never, never let it go,” Pringle says. “I’m going to be salty about it forever, I think.”

The Chase screens on TVNZ 1 every day at 11am and 5pm, and on TVNZ OnDemand.