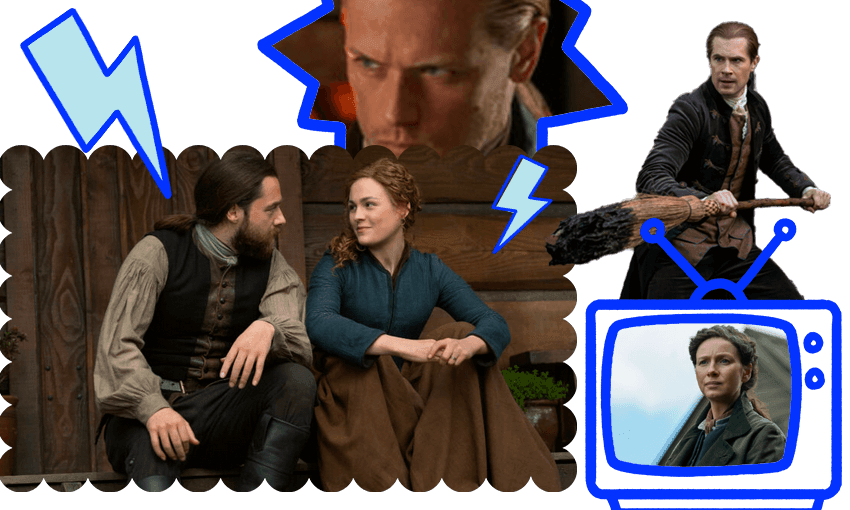 Just when you think you’ve seen everything on Outlander, they give us Stephen Bonnet’s testicles in a jar. Tara Ward recaps episode five of season six.

It was balls ahoy in Outlander this week, as Jamie and Claire danced with the ghosts of their past. A visit to Wilmington saw the Frasers bump into ex-enemy Stephen Bonnet’s testicles in a jar, while back at the Ridge, Bree told Roger she was pregnant. That’s right, there’s about to be a new baby on the Ridge, who will no doubt be born with its father’s lush facial hair and its mother love of indoor plumbing.

Jamie and Claire were in Wilmington to meet Flora Macdonald, the legendary woman who smuggled Bonnie Prince Charlie out of Scotland in 1746. Flora was speaking at a pro-government event organised by Jocasta, where she urged the people of North Carolina to stay loyal the Crown. Flora was cool, but her words had no influence on Jamie, who had already decided to ditch the Crown and align with Sons of Liberty.

Things are getting tense in the colonies, and it’s a shame Jamie can’t tell everyone that his walking pharmacy of a wife knows war is coming and that the Crown will lose. Claire distracted herself by getting Jocasta high on hemp flower, and by giving Jamie first aid after he and Lord John fought off a rebellious crowd with nothing but a broomstick. Woe betide the rioter who throws tar at Jamie Fraser’s face. Please, anything but the face.

Sadly, Claire had no medicine to fix Lord John’s broken heart after Jamie revealed he was joining Sons of Liberty. Lord John was in disbelief. How could a man who had been abused, imprisoned, mistreated and threatened by the Crown, no longer support the Crown? He was sadder than the time he had measles and Claire had to do acupressure on his eye sockets. This was a situation even acupressure couldn’t fix.

But while Stephen Bonnet’s balls bubbled in a jar, the women of Fraser’s Ridge faced their own random body part conundrum. Someone on the Ridge was using human fingers to make a love charm, and Bree and Marsali were not impressed. They should be roping this scene off with caution tape and calling 111, but astonishingly, nobody seemed concerned about whose hand those fingers belonged to. Nobody did a finger inventory. No one even tried to point the finger. It’s a digital disgrace.

Of course, when fingers are involved, we immediately know the culprit: Malva Christie, who looks like trouble and now smells like fingers. The phalanges belonged to the Sin Eater, the bloke who popped up at Grannie Wilson’s funeral, and Malva’s been cutting off his dead fingers in her spare time and throwing them into a fire in the name of true love. Sounds wild, but on the other hand, Roger caught Malva in the church pashing a local lad. Maybe Fingers Christie is on to something after all.

Marsali reckoned the love spell was called “Venom of the North Wind”, which sounds a lot like the satanic smell you’d get if you opened that jar of Stephen Bonnet’s bits and pieces. What will we do without Marsali when she leaves the Ridge to join Fergus in New Bern, where he’s working in Jocasta’s print shop? Jocasta is gearing up to print some big words about the war, and Jamie’s not best pleased that his son will be caught up in it.

But nobody’s caught up in things more than our heroine, grandmother-to-be Claire. As she and Jamie left Wilmington, she heard the whistle of a faraway song and recognised it as from her time. She put it down to the wind, but did the wind also take an emerald out of Flora Macdonald’s necklace? Does the wind have hair and is currently locked in Wilmington jail? Does the wind look like Wendigo Donner, the time traveller who helped kidnap Claire in last season’s finale?

The truth is out there, and it’s probably sitting in a jar next to Stephen Bonnet’s bollocks.