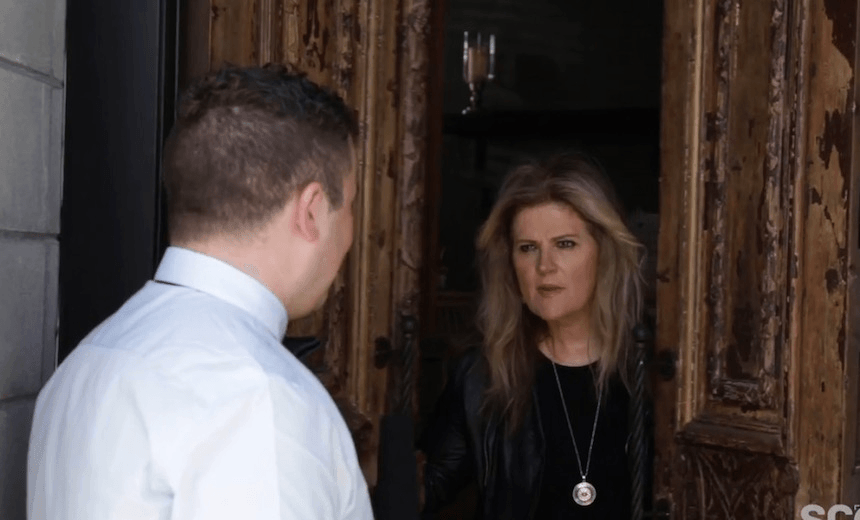 Nothing like a dame: Why Julie Christie’s honour is an insult to our TV industry

It beggars belief for a damehood to be bestowed upon a cultural vandal, argues Simon Wilson.

I don’t know why I even give a damn about this. Knighthoods and damehoods, who needs ’em, eh? But we do have them, and they’re our official measure of greatness, so we take notice.

Actually, they’re not quite the official mark of exaltation they are supposed to be. Knighthoods and damehoods get given ex-officio to some people – judges and politicians of a certain rank, most obviously – and further down the pecking order there is surely no one left in the brass and pipe bands communities, or who lives in Tolaga Bay, who does not have some kind of gong. Some groups take this stuff much more seriously than others.

But still, Julie Christie. Actual vandals don’t often get officially acclaimed, even if they’re in the cultural sector. But she has been. What did she do, exactly?

She made TV that was outstandingly successful, commercially. That’s a positive. The reward for that is wealth, which doesn’t, to my mind, exclude her from high honours. The question to ask is: what, in the process of making money, Christie did to improve the quality of life in this country? What did she add, and what did she subtract, and what did we end up with because of her?

Julie Christie pioneered reality television in New Zealand, along the way creating some formats that sold extremely well overseas. Her reign as queen of the genre coincided with the decline of long-form current affairs TV and what we fondly call “quality drama”.

She can’t be blamed for the demise of those formats – the trend was international and its causes are far deeper than the distractions of cheap and easy entertainments.

Besides, TV has always had cheap and easy entertainments, as anyone who remembers Selwyn Toogood, Pete Sinclair and even Rolf Harris, for that matter, will know. Cheap and easy doesn’t mean good, or bad, any more than long-form current affairs or traditional BBC drama does. Every genre has a bell curve of quality, and why wouldn’t it?

What Christie did, though, is take a leading role in embedding the notion that quality can’t co-exist with popularity. That because primetime must be popular, quality has to go somewhere else. Or nowhere at all.

The result is stark. While the western world has spent almost 20 years basking in a “golden age” of television, only one programme that was commissioned here and screened free-to-air in primetime contributes to the canon. That’s Outrageous Fortune.

Sure, we’re not America, where for every Sopranos and West Wing and all that followed, there has been also just so much crap.

But we could have been Denmark. That’s the country that gave us The Killing, Borgen, The Bridge and a whole heap more internationally acclaimed TV. We’ve got the same size population, very similar cultural traditions and a significant market advantage over the Danes in that our main language is English. But while Denmark, and the other Scandinavian countries, and Ireland too, all decided years ago they would get serious about projecting their culture to the world in the form of quality television and film, we decided, what? What did we decide?

It was this. We decided very specifically not to take that path. We commissioned no projects that would aim for greatness. Producers who wanted to do that were rejected. Great, in New Zealand, was declared the enemy of good. And good, when you look at it like that, really means good enough, barely good enough, we don’t even know what good is anymore.

Julie Christie didn’t make those decisions. The true villains are elsewhere and one day should be called to account. But she benefitted from them. She was the star whose glitter was supposed to blind us to what might have been.

She was also, in her more recent incarnation as a board member of MediaWorks, instrumental in the destruction of the network that made most of things we should celebrate about New Zealand TV over the last 30 years. The best drama, the best comedy, the best news, the best current affairs, the best children’s shows… not all of it, but an awful lot of it. While the state broadcaster wallowed in its own mediocrity, TV3 got on with making good TV.

But then that stopped. Outrageous Fortune, I think it’s safe to say, would not have been greenlit on Christie’s watch. Mark Weldon was the CEO, but Julie Christie was his enabler. The board member who led the charge.

As it happens, there is still good some stuff on Three, which speaks much of the quality of its DNA. But little of what’s good now was established by Weldon and Christie. The good stuff now rose from the ashes of their fires. They were cultural vandals, pure and simple.

Making Julie Christie a dame is an insult to the television industry and all who try to make great work in it. The measure is not the extent of her success, but the damage she did to everyone else.