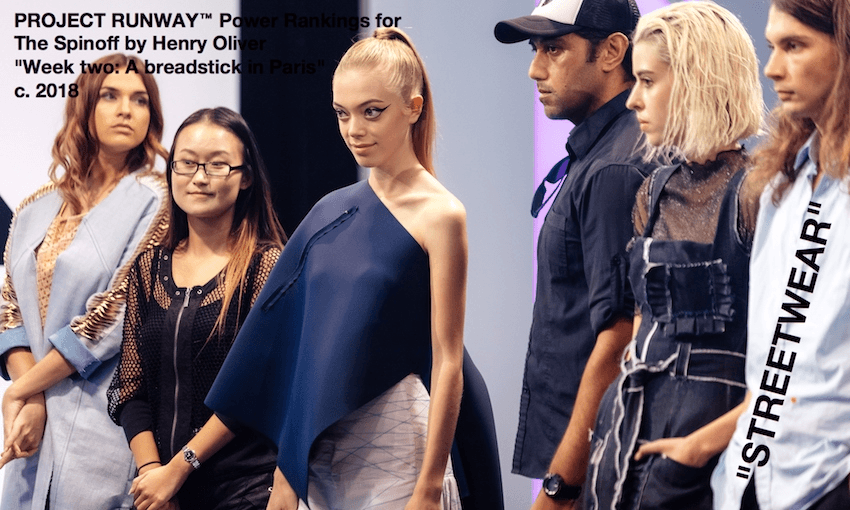 It’s the second episode of Project Runway New Zealand, in which the designers have to make a streetwear look inspired by … Sylvia Park? Henry Oliver ranks the results.

In the words of guest judge James Dobson (Jimmy D), can I be really honest… this was a shitshow. The streetwear challenge should have been a gimme for most of these designers – take what you see young people wearing in real life, combine it with what you see young people wearing on the internet, then find a way to personalise/elevate it a little. Done! Honestly, it was shocking how many of the contestants (a better description than designers this week) didn’t know what streetwear was let alone what it looked like.

I mean, if you have no exposure to either actual streetwear or high-end fashion’s version of that streetwear, you clearly have very little idea about what’s going on in fashion at the moment and you made no preparation to be on a reality TV show where you knew you’d have to interpret a wide range of aesthetics. You don’t need to wear dad sneakers that weigh more than Doc boots, pay $1500 for a Snoop Dogg t-shirt, or have live-streamed Virgil Abloh’s debut Louis Vuitton collection to know what the capital-F Fashion version of streetwear looks like.

To be fair, it probably didn’t help matters that Andreas (who has a PhD BTW) described the ’90s as the “late-20th century,” which got some of the designers looking to the turn of the century (i.e. 1890s into the 1900s) or mid-century (i.e. early-Mad Men).

Fashion aside, there was little drama in this episode. The Benjamin/Kerry rivalry inched forward ever so slowly and Benny Castles (who provided the zinger burgers on episode one) seemed rather placid and, well, forgiving. I hope that it was a lack of coffee in the green room rather than a) increased empathy for the contestants, b) notes from the network, or, worse c) thinking these designs were good.

Anyway… to the rankings!

Beth should have gone home this week. When a designer designs for themselves (when they say ‘My aesthetic is…’ in relation to what they’re wearing more than what they’re designing) you’re usually in trouble. Beth has said that to prepare for the show, she sat down with her fashion design tutor and “went through every possible genre of fashion, talked about their origins.” She can’t have listened very hard.

“Well done on the use of colour,” Georgia said.

I feel bad for Judy. She can’t stop talking about how bad she is at making clothes. Maybe she’s right. The twist-and-sew detailing shows she’s watched a lot of Project Runway though, so there’s that. But those shorts! That top!

I don’t know what this is and I don’t like it at all.

Camille (whose friend “happens to be a DJ”) is good at coming up with silhouettes that stand out from her competition and look good in that shadow pose thing with the logo, but once they’re looked at closely, tend to look a bit shitty. Still surprised she’s been in the top both episodes.

Oh no! That top! The pants looked … interesting in their use of proportion. And layered and distressed seems like a bit of a can’t-miss, but that top should be arrested.

Noooooooo! One of the only contestants with style made a weird… I dunno? Plaid thing? I mean, plaid can be streetwear, and hoods are definitely streetwear, but it’s hard to tell what that was. It fit badly, was unfinished, and just generally convoluted.

Loyal readers of these power rankings will know that I bought a significant holding of Lenon stock while it was selling low last week and I’m sad to say I’ve bottomed out on that investment.

Everything looks well-made. Lots of work, plenty of skill and all that. The pants work conceptually – the tear away pants things has been brought back a few times recently – but the top half is just ugly. And not in a cool way. She looks like a circus ringleader dressed by Karen Walker. And not in a cool way.

Fine. Safe. Okay. I guess Remuera Road is a street.

Peni’s the man, though his “you will not see me walking around in jandals” monologue was more beautiful than his burgundy tracksuit, which at least looked well-made and on-point. The coat, etc., just weren’t that interesting. Probably not dramatic enough on the runway but still, one of the few well-made, well put together outfits of the episode.

Matt clearly knows what he’s doing this week, even if the judges didn’t seem to care for it. “I’d love to learn to sew better,” he said with total self-awareness. I mean, his design is not amazing, but you can see where he’s going. It might be a bit dated, but his all white/cream dystopian layering (with a Max Gimblett red stripe down the back) was definitely on-challenge even if it wasn’t on-trend. (Side note: was his model just holding one of the shoes he was meant to incorporate into the look?) And Matt dabbing for Jimmy D was maybe the highlight of the show.

This is total Project Runway-bait. A few years ago there were like three seasons of Project Runway when everyone used neoprene in nearly every challenge. It’s modern, it’s easy to make voluminous, and it seems like it’s easy to make look finished. Not that this was bad, but I think it was more tactically smart than aesthetically good.

Younger readers may not remember, but in the ’90s (and early ’00s) there were stores on K Road and Cuba Street where all they sold were clothes to go to raves in. Usually crazy wide pants and tight ringer t-shirts. They probably actually sold speed and E (that what we called those drugs back then) and the weird clothes were a front, but anyway, Benjamin’s outfit reminded me of those stores.

Maybe Benjamin isn’t aware of that aesthetic cos he told some story about a woman he saw in Paris wearing a tracksuit with a mink coat, holding a breadstick, which doesn’t conjure anything he put on the runway. And, A ‘BREADSTICK’! IN PARIS! (I know that sounds classist, but he’s the one who brought up Paris and mink coats).

This coat was legit. Very ’90s (or at least, very 2018 version of the 90s). The rest of the outfit was inconsequentially fine, but I could see people I know who are younger and cooler and go out later than me actually wearing that coat IRL. And graded on the curve of this week’s episode, that’s a huge compliment.

Endnote: Last season on Top Chef (or was it the season before?) the judges called the chefs to the judging table and told them the food they were making just wasn’t Top Chef quality. It worked. As a day-one fan of Project Runway, I think our judges need to do the same. ASAP.