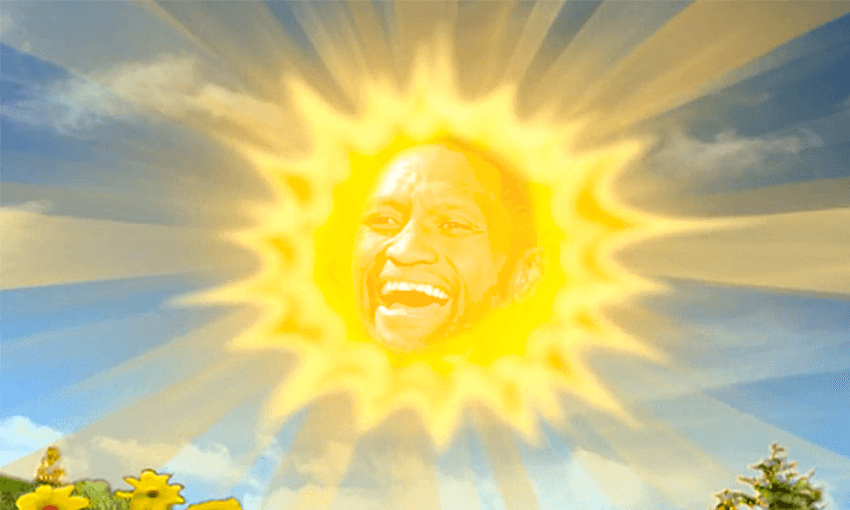 Alex Casey pays tribute to one of the only good things left in this cold, hard world.

There’s been a lot to love about this season of Dancing With the Stars NZ. If you like runaway ponytails, this is the show for you. If you like completely hectic judges being unpredictable and also changing their eye colour, it’s got that in spades. There’s also been Mike McRoberts in a glitzy waistcoat, Judith Collins in the audience and yes, there’s been some bloody impressive dancing. But none of those are the best thing about the show.

The best thing, hands down, 10s across the board, is Manu Vatuvei’s laugh.

Truthfully, I didn’t think we’d get another interesting laugh from anyone on reality television this year. From the first moment that Mel on Married at First Sight Australia unleashed her iconic chuckle, it seemed like the market was stitched up till at least 2020. Sometimes she sounded like The Grinch crying, other times she sounded the lion in the Wizard of Oz, but most of the time she was The Count from Sesame Street. Please note, none of those examples are human.

But then along came Manu Vatuvei, league player turned dance extraordinaire and just an absolutely sensational laugher. I don’t know much about league, but I can confidently say that the man’s commitment to having a haha and also a tehe is truly in a league of its own. It is a robust, hearty laugh, one that rapidly builds to a full-blown guffaw in the space of 1-2 seconds. Drawing inspiration from the likes of Krusty the Clown, his laugh is easily the purest thing on television.

Because Manu laughs at everything. He laughs when he scooters around in a circle in his backyard. He laughs when he gets feedback from the judges. He laughs when he has to move his hips during training. When telling the camera  about his four daughters, Manu had a brief moment of seriousness as he worried about them getting older. “They grow up so fast, soon they are going to be single for…” He pauses, face cracking into a glorious grin. “The rest of their lives.”

But don’t just take my word for it. Surely a seasoned comedian would know a good laugh when they hear it, so I asked Dancing With the Stars NZ host Dai Henwood to review his first-hand experience of the Manu Vatuvei laugh. “Manu brings happiness to the backstage area with that laugh,” he says. “Even when I am in my dressing room about 200m away I can hear it echoing through the halls and it puts me in a good mood. It is like a Tongan Mozart playing his tonsils.”

Even John McDonald, the Executive Producer of Dancing With the Stars NZ, is aware of just how special Manu’s laugh is. “Manu’s laugh is joyous, unique and thankfully for production – carries. Very useful as a tracking device when he’s on set and we need to locate him.” It’s like they always say, a functional laugh is a laugh enjoyed twice. It wouldn’t surprise me if they started using the laugh to communicate with aliens in the far reaches of space.

It is not just the volume or the speed of the laugh we must consider, but the beaming face from whence it erupts. When Manu laughs I am reminded of the jolly baby that lives in the Teletubbies sun, watching over us with a warm giggle, untouched by the horrors of the world. Manu doesn’t hold back an ounce of emotion, his whole face splitting in half like when you cut a little wedge out of a lemon and the rest of the lemon just looks really, really happy.

From my extensive research I have gleaned that Manu laughs the hardest around William Waiirua, he of the Spanish pelvis explosions and deftly-crossed eyes. Experts will tune into Waiirua’s Instagram stories, where he routinely roasts Manu behind the scenes. One of his favourite things to do is film Manu when he’s getting his spray tan, another is to shove his pouty women’s magazine shoot in his face, asking him to “never make that face again.”

Manu could never make that face again of course, because he’s too busy laughing.

“You know it was really fabulous the first couple of times I heard it,” William Waiirua told The Spinoff. “But then when you hear it 20 hours out of 24 hours in a day, it’s really annoying. It’s getting on my nerves listening to that thing,” he laughed. I just hope we all can learn something from the generous laugh, one poured out of the same man who wasn’t afraid to weep on camera to an Elton John song, or hold hands with his friend Glen on live TV.

Maybe it’s okay to have a lot of feelings, and maybe it’s even more okay to show them.