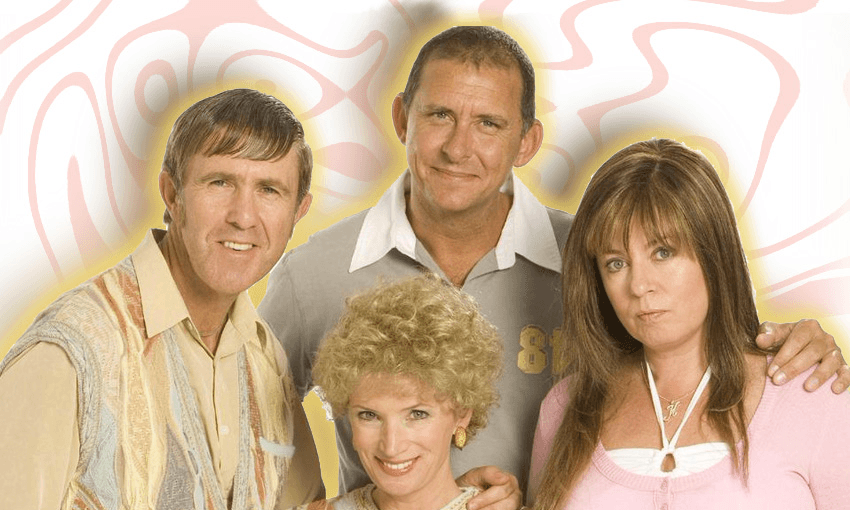 What I learned about love and masculinity from Kath and Kim

In these days of alienation, singletons need all the help they can get. But who is doing love right? Only the hottest couple in Fountain Lakes, explains Don Rowe.

There are a lot of unhealthy behaviours on the television folks, a lot of cheating, philandering, and promiscuity. From Game of Thrones to Euphoria, our stars of the small screen are a plethora of scoundrels and rogues. There’s not a lot of love on display.

Where do we look for healthy relationships? Where, to quote rap philosophers the Black Eyed Peas, is the love? We talk about toxic masculinity and patriarchal societies, but we often don’t talk about what comes next. What is it to be a man in 2019? How should one behave relative to their spouse? Who is modeling positive behaviour to our young tāne?

Kath Day and Kel Knight, that’s who. The snazziest gal in Fountain Lakes and her great hunk of vinyl-wearing spunk. Relentlessly optimistic, deeply in love, constantly keen to bone, they’re an aspirational ideal of what’s possible through love. And in these times of loneliness, these days of alienation, we need all the pointers we can get.

I’ve been binging the Good Show to get through the cold winter days, and heart warmed and informed, I now pass my learnings on love and masculinity to you.

Relationships, like jobs, take work. You have to make an effort. It’s important to take an active interest in your partner’s hobbies, and that sometimes means more than just supporting their involvement from the sidelines. In season one, episode five, Kel learns to waltz, surprising Kath at a nightclub, despite dance-related childhood trauma. “Ever since I was a kid I’ve been ridiculed for my dancing, I thought you’d be turned off,” he reveals.

Relationship researcher and PhD candidate Holly Dixon says it’s a powerful example of ‘growth orientation’. “I was struck by the way Kel and Kath are so oriented to growing together,” she says. “You see it in their interactions, how much they support each other’s dreams. They dance together, they go to see a sex therapist together, and they’re really open to being supportive.

“When Kath loses her libido, Kel is the one that initiates sex therapy, and that says something about masculinity that he can display softer feminine qualities like supporting his partner’s distress and being very caring. They’re attuned to growing together.”

It turns out that communication is actually pretty important in securing and maintaining healthy relationships. And sometimes it’s on you as a partner to reach out – but it’s crucial you do so with tact. “What’s up your ass?” is not OK. “A penny for your thoughts, foxy lady” is better.

Relationships are about lifting one another up. They’re about showing a new way of thinking. Offering different perspectives. In season one, Kath’s daughter Kim swears off men and takes up golf with her second-best friend Sharon (whose real-life dad was a Nazi-killing Polish spy!). Kath thinks she might be gay and gets all apples and oranges, until Kel reveals he’d experimented in the navy and there was nothing wrong or abnormal about homosexuality.

“I’m such a nong for thinking you were gay,” Kath says. “You love Barbra Streisand!”

Relationships are also about trust, and forgiveness. When Kel’s old friend Sandy Freckle comes on the scene and takes a shine to Kath, things get a little bit too close. After a romantic panini at Westfield and an arousing drive past the BBQ Warehouse, Sandy makes a move on a crushing Kath.

Kath rejects Sandy and departs for a quick dart, but later, during a party at the Day-Knight residence, Kel catches them together in a bathroom. It turns into a he-said, she-said about whether or not anything had happened. Kel’s underlying insecurity is that he’ll be left at the altar, as he has the last four times Sandy showed up, or that Kath will leave, but he takes her side regardless and kicks Sandy’s ass. Crushes happen in relationships, Dixon says, but they can be worked through – so long as there is communication and forgiveness.

“It can be discombobulating. It can be very disconcerting particular if you have what’s known as destiny belief. But the presence of the attraction to another person is normal. It’s what we do with it that shapes the relationship outcome. The fact that Kel takes her side is a really beneficial act for their long term relationship security – he’s showing he trusts her.”

Kath and Kel are keen athletes, and draped in fluoro they pound the pavement together. Research suggests this is actually a great way to strengthen a relationship, increasing satisfaction, fostering a stronger emotional bond and even mimicking the signs of sexual arousal – which might explain how they’re still so horned up.

Because Kath and Kel love to bang. They love to kiss, mouths open, lips sucked inward like dementors, writhing on the kitchen table. She’s a foxy lady and he’s a big old spunk rat. He is a virile god and she a buxom temptress. Entwined like Rangi and Papa, their lust is Herculean. Their kinks are by all accounts comparable. Even in their 50s they thrust themselves upon one another like Timothee Chalamet and Lily Rose Depp.

It’s probably excessive, says Dixon. The minimum amount for a satisfying sexual relationship is once a week, but research indicates there’s no increased benefit to three times or more.

“It’s not the sex act itself – sex has stress buffering effects and so on – but it’s what the sex means. You can think of it as a way of connecting and an intimate sexual experience. It’s more that which makes a difference than an orgasm, for example.”

In this world, people come with baggage. It takes a real man to raise someone else’s kid, especially when they’re 27 and a real snarky pain in the ass. Kim hates Kel for taking attention that is rightfully hers, but he perseveres, builds a relationship with Kim’s henpecked husband Brett, and eventually wins Kim over. In season 2, when a pregnant Kim and Brett move back into the family townhouse, it’s Kel who convinces Kath it’s a good idea.

Relationships are supposed to improve your life; they’re sources of joy and support, not restrictions. On Kel’s stag night, he takes Brett to a nice gastronomic experience and teaches him about wine. He doesn’t view marriage as a prison so there’s no need for one last big blow out. Kel constantly affirms Kath, especially when she’s feeling down. And Kath affirms Kel; he’s a hunk of spunk, a horn bag and a great old spunk rat.

“Pet names show a demonstration of affection, and we need to keep investing in our relationships,” says Dixon “Those instances where we call each other a spunk rat are an indication of your continued interests. It’s a reassurance.

But the relationship isn’t always plain sailing. “Kel throws a TV out the window because he wanted reception, and Kath just tells him to get in the shower tout suite  –most people would be pretty angry, but she’s able to understand his funk and offers her forgiveness.”

While Kath and Kel coordinate their outfits, they remain fiercely independent with their hair. This is an example of how we can reflect our partners while retaining independence. For every Brylcreem combover, a foxy perm.

Relationships can help you to find a silver lining, like when Kath and Kel’s honeymoon plans are ruined by a grounded flight and they spend it enjoying the delights of the airport. And that’s what love should be, right? Something that enriches you, raises you up, makes everything shine. Love is a warm vest, a vinyl jacket, a duzza and a vino at the kitchen window.

Dixon’s research is currently focused on the health effects of a positive relationship, and it’s becoming clear that a love like Kath and Kel’s can literally ward off death.

“We have better physical health, better psychological health, we’re more resilient. Close enduring connections between relationship quality and health outcomes is similar in magnitude to that of exercise and a good diet. The other side of that is that a lack of supportive, satisfying relationships is that we experience decreases in health and mortality.

“What we see is that Kath and Kel are on an upward positive spiral, they’re oriented to showing affection, supporting each other, meeting one another’s needs. Upwards spirals are something people should maximise the impact of, because it’s quite powerful and cool.”

So raise a glass of “cardonay” for Kath and Kel’s marriage. It’s nice, it’s different and – unfortunately for this world – wholly unusual.

All six seasons of Kath & Kim are streaming on Netflix.