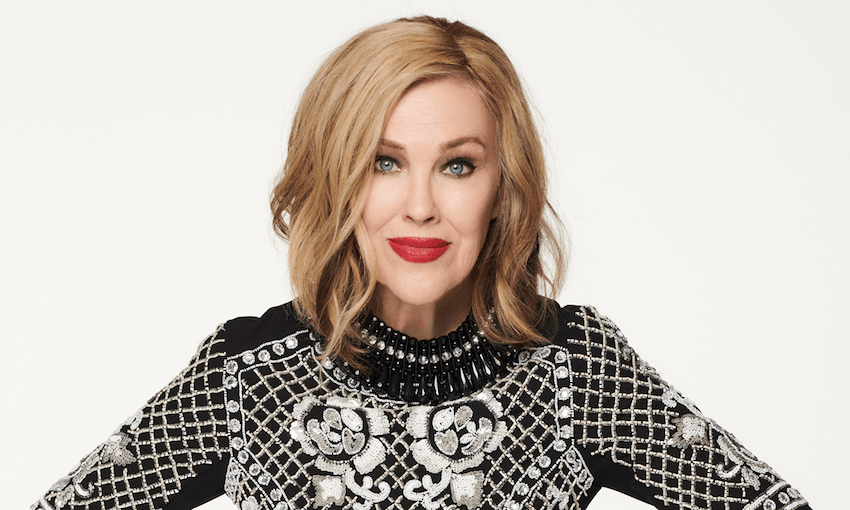 The Queen of her Canadian Small Town: Moira Rose.

The Queen of her Canadian Small Town: Moira Rose.

Who could have predicted Schitt’s Creek, that most low-key, questionably named sitcom, would bear such fruit in former daytime soap actress Moira Rose? Iconic is a word too quickly biffed around these days, but it’s truly apt for Catherine O’Hara’s singular performance as the Rose family matriarch.

What makes Moira Rose worthy of this title isn’t just her arresting appearance – her ostentatious monochrome wardrobe standing in defiant contrast to the Schitt’s Creek townsfolk’s denim and plaid. Nor is it just her recondite lexicon and unpredictable accent, heavy with zig-zagging vowels. It’s these, and the historical context she brings with her that make Moira Rose an unforgettable character.

So where did she come from? Below, I’ve gathered a few performances and real-life people who just might have influenced Catherine O’Hara’s magnificent Moira Rose.

The accent known as ‘mid-Atlantic’ was adopted by elite Americans in the early part of the 20th century simply because, well, they could. It’s entirely affectatious – you had to really make yourself talk this way, with staccato ‘t’s and long ‘a’s – think Julia Child’s jubilantly authoritative enunciation, or Meryl Streep’s portrayal of her in Julia and Julia; Katharine Hepburn’s wealthy divorcee in The Philadelphia Story, or Kristin Wiig’s boisterous impersonation of her on Saturday Night Live. Given it was favoured by actors and aristocrats, both of which Moira is, more or less, I have no doubt this accent provided the base note of her character. (Since Catherine O’Hara is Canadian, you might wonder if she’s actually doing the local version of the accent, the adorably named Canadian Dainty. But I suspect Moira’s influences are straight from old Hollywood.)

I propose three legendary characters as clear models for reluctant has-been Moira Rose: Blanche Dubois in A Streetcar Named Desire, Norma Desmond in Sunset Boulevard, and Ethel Merman’s Mama Rose in the Broadway musical Gypsy. All three women are venal yet vulnerable, with a certain washed-up brassiness; all of them are attempting to recapture lost glory and, importantly, lost control. Blanche’s put-upon, stagey intensity; Norma’s wild eyes, wealth and heartbreaking misapprehension about her return to fame; Mama Rose conflating motherhood with the pursuit of fame: that’s pure Moira Rose.

Take John Lithgow as Dick Solomon in 3rd Rock From The Sun: like the Roses, his family is very far from home. However, unlike Moira, who screams in confusion at a lightbulb, Dick has the excuse of being a literal alien. His fresh bewilderment at the world and declamatory voice, positioning him as superior to all: that’s pure Moira Rose.

In Frasier, Kelsey Grammar and David Hyde Pierce as Frasier and Niles Crane are similarly pretentious, with quasi-aristocratic speaking styles, while Harriet Sansom Harris as conniving agent Bebe Glazer has a mid-Atlantic accent that rivals even the brothers Crane. Bebe’s campy showbiz ruthlessness; Frasier’s use of words like “perspicacity”: that’s pure Moira Rose.

30 Rock’s petulant ham Jenna Maroney has many echoes in the character of Moira Rose. Think of her desperate scramble for fame; her resistance to reality; her multiple dubious product endorsements. Moira Rose’s name even seems designed to trip up the mouth in the same way as Jenna’s rhotic-heavy movie Rural Juror. The way Jenna breaks into song; the way she lies about her age; how her star power increases when people think she’s dead: that’s pure Moira Rose.

Just like Moira Rose herself, there’s no impression of Jackie Kennedy’s accent that could possibly sound more unusual than the real thing, and I hear her loud and clear in Moira. Jackie’s odd lilting voice, with softened consonants and belaboured syllables; her audacious wealth and unique fashion sense: that’s pure Moira Rose.

The strange life of Jackie’s socialite cousin, Edith “Little Edie” Bouvier Beale, was brought to public attention in the 1975 documentary Grey Gardens. Beale lost both her hair and fortune relatively young and ended up living in squalor with her mother and many cats. Naturally, I see much of her in Moira. Little Edie inventively employed her distinctive headscarves to create a resolutely elegant visage, while Moira Rose puts her best face forward with her astonishing, rarely-repeated wigs. It was O’Hara’s suggestion to use them, apparently, and while it’s unclear what Moira’s real hair looks like – if she even has any – like Little Edie’s headscarves, the wigs are a key part of her fierce aesthetic persona.

In Grey Gardens, Little Edie is riveting as she pragmatically explains in her peculiar accent that her skirt – clearly repurposed from a curtain or similar fabric – can also be worn as a cape. “I have to think these things up, you know,” she says of her “costume for the day.” Moira Rose, who so thoroughly refuses to accept her fall from grace that she wears avant-garde clothing and jewelry to bed, is truly distilled from this moment. Everything Little Edie does: that’s pure Moira Rose.

Catherine O’Hara is giving a fabulously layered, deservedly lauded performance as Moira Rose in Schitt’s Creek. Perhaps none of the influences I’ve explored even exist, and O’Hara just woke up on day one of shooting deciding to perform in this extraordinary manner. But I think there’s more to it than that. And ultimately, even if all this speculation proves false, it can’t be denied that celebrating the iconic Moira Rose – well, that’s the most pure Moira Rose of all.

All five seasons of Schitt’s Creek are streaming on Netflix now.