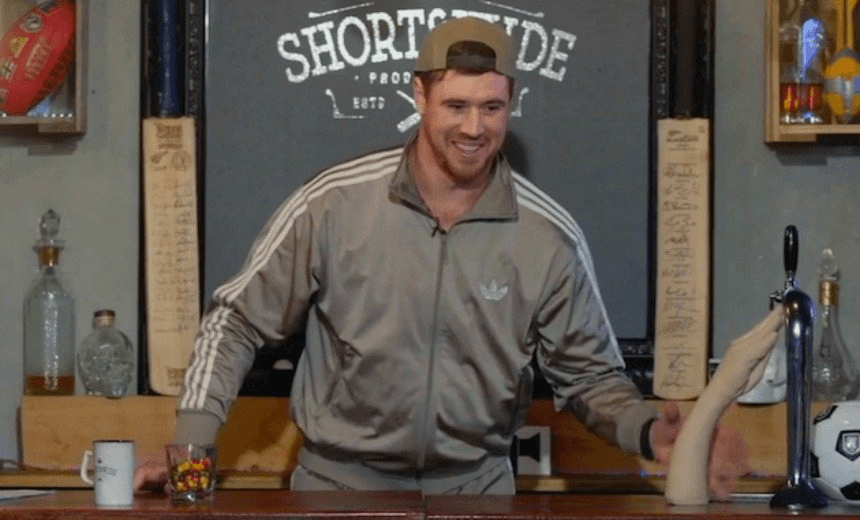 When TVNZ announced their new male-skewed channel, DUKE, at the start of this year, it was unsurprisingly met with disdain. But programmers were quick to note that it wasn’t a channel for men, it was for everyone. But it would mostly be screening shows that target a male audience. Tomato tomahto.

Three weeks ago, DUKE premiered what appears to be its first original, locally produced show, Short & Wide. It’s a sports chat show that promises BANTER, GAGS, and SPORTS CHAT. Despite those words making me want to find a way to somehow obliterate sports as a general concept, I went online to catch up on their first three episodes. At only 12 minutes each, how bad could it be?

First off, their descriptor of ‘three failed sportsmen’ is a half truth at best. Anthony ‘Ants’ Nilert was a promising cricketer and therefore is a failed sportsman. But George Harper Jnr and Andrew ‘AJ’ James aka The Gag Man (GAGCEPTION) are failed sportsmen as much as I’m a failed astronaut and failed Pulitzer Prize winner.

Before I stepped into this great void of quality bantz, I watched a short clip where the lads discussed demographics with other television personalities. What is Short & Wide’s demographic? “Funnily enough, women do play sport as well,” joked co-host George Harper Jnr. “So we’re gonna get them involved.”

Sounds promising. I was expecting the worst and hoping for the best as I pressed play on episode one and fell into a walking, talking, Veitchy on Sport comments section.

Harper then turned to Worker, also injured, and asked:

I heard the loud, male laughter. I knew it couldn’t be good. But I had to know.

Why would I Google ‘dutch rudder’, you ask? I don’t know, why do I sometimes go to the gym, fill up my water bottle at the purified fountain and then leave immediately? These are valid questions that I don’t have answers for.

Whatever the case, I was three minutes in and had hit the rock bottom of this festering man cave. But as a fellow failed sportsperson, I knew I had to stick it out. FOR DA BOIZ.

The next segment was a competition between two of the three lads in an arbitrary event. In this segment, they dressed up as sexy bunnies and ran away from Greyhounds.

And free dive world record holder William Trubridge was asked about genital shrinkage for 85% of his interview. The lads were nothing if not consistent.

By their third episode, they had their first female guest appear, beach volleyball player Julia Tilley. It became clear by the end of the episode that she was friends with, or at least knew, some of the lads (AJ admitted to flirting with her at university). This might forgive the crappy interview, but it probably doesn’t.

AJ: What’s your preference, black or white…
JT: Sand?
AJ: …sand.
[Big laughs]
AN: Or are you just not fussy at all?
[More laughs]
JT: The white sand doesn’t heat up as much. Black sand, if it’s sunny it’s a nightmare to play on.
AJ: Too hot to handle.

GH: Was the change to beach volleyball to work on the tan or was it actually strategic?

GH: Why only two players in beach volleyball?
JT: One person at the front, one at the back. You don’t really need anyone else.
GH: Sounds like a party.
[Guffaws]

By this point I had completed my transformation into Gob Bluth and ‘The Sound of Silence’ was starting to play from somewhere deep within my soul.

DUKE insisted it was a channel for everyone. But even as a fan of sports shows and the dreaded banter, I found nothing for me and my lady brain on Short & Wide. Even the name itself, after the copious sexual references, sounds dirty. In reality, it’s a reference to a piss poor delivery in cricket. Short and wide. What an appropriate name it’s turned out to be.