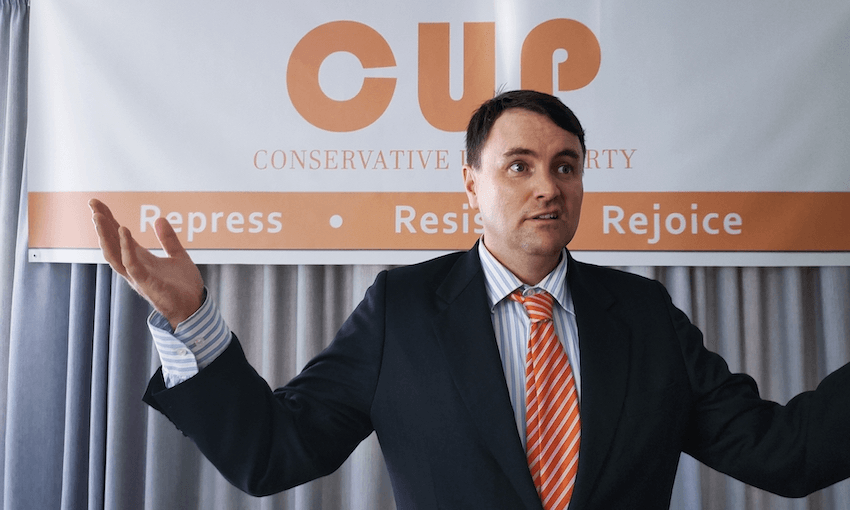 The new TVNZ On Demand political comedy relies on great performances to paper over a wafer-thin story, writes Jean Sergent.

Not especially! There’s not much tension in the story, but what this comedy has in spades is good performances from great actors. While the female characters are extremely stereotypical – dominatrix, meek and mild missus, and staunch wahine – there’s a little more nuance and variety from the blokes. Considering the casting coup of Maria Walker (Top of the Lake, The Dead Lands) as journalist Carol Kopa, here’s hoping Sextortion evolves that character beyond the journo-as-muckraker trope and into something a little more exciting. But that all depends on the writers, doesn’t it? I wonder if they’re aware that all they’re doing with their three women – particularly the Madonna and whore stand-ins – is ticking off archetypes.

Natalie Medlock, a terrific writer and actor, is doing double duty in the writers’ room and on screen as Darren’s wife Belinda, who is treated like shit by both her husband and father-in-law. Maybe there’s a commentary here on the position of women in fundamentalist conservative Christianity, but I’d be a lot more interested if she had a bit of fire to her.

Writer and star Tom Sainsbury is one of the greatest comic talents in Aotearoa. With his brilliant Snapchat characters and his spot-on, transcendently subversive political impersonations, he’s proven himself a superbly gifted, incredibly funny writer and actor. In Sextortion, he holds the show together thanks to his willingness to commit to hideously embarrassing moments in a way that lends credibility to a pathetic character like Darren. Sainsbury’s ensemble work in Educators has shown audiences his flair for comic naturalism, but Sextortion is the first time he is being tasked with carrying some emotional weight. He’s terrific, even when the story is weak. I’m worried about Darren Bellows because Tom Sainsbury makes me feel all of his pathetic anxieties.

There is an absolutely stunning turn in episode one from Richard Hyssett as Gordon. It’s a short monologue about all the party supporters who can’t be at the launch, and it is delivered with such understated truth that I watched it over and over again, each time wishing the list of names and excuses (Brian, who is getting a vasectomy, otherwise his wife says that’s it) would get longer and longer each time. This is a perfect piece of writing and casting that shows Sextortion’s potential to develop into a show that truly plumbs the depths of the conservative New Zealand psyche.

The performances are what really holds the show together; the storyline is pretty middling, pretty predictable, pretty old-fashioned really. It’s the sort of show that you watch and say, well, good on you I suppose. You made a thing. But where is it going to go? When the dominatrix character says ‘prostitution’ instead of ‘sex work’, it seems to sum up Sextortion’s lack of rigour in uncovering the social, political, and emotional motivations of the characters. Why would anyone care if go-nowhere political hopeful Darren gets busted for having an exciting sex life? It’s not as if he has done anything wrong. It’d be embarrassing for the CUP’s voting base if his sex tape came to light, but as episode one demonstrated, the party doesn’t really have a voting base. So what is the show trying to say?

I’ll keep watching. Tom Sainsbury is probably a genius, and seeing him get into scrapes is always a joy, even when those scrapes are as low stakes as the ones facing Darren Bellows. In this election year, the promise of Sextortion’s dark political satire might lure you in. But if you stay, you’ll stay for the performances.

The first two episodes of Sextortion are streaming on TVNZ On Demand now.