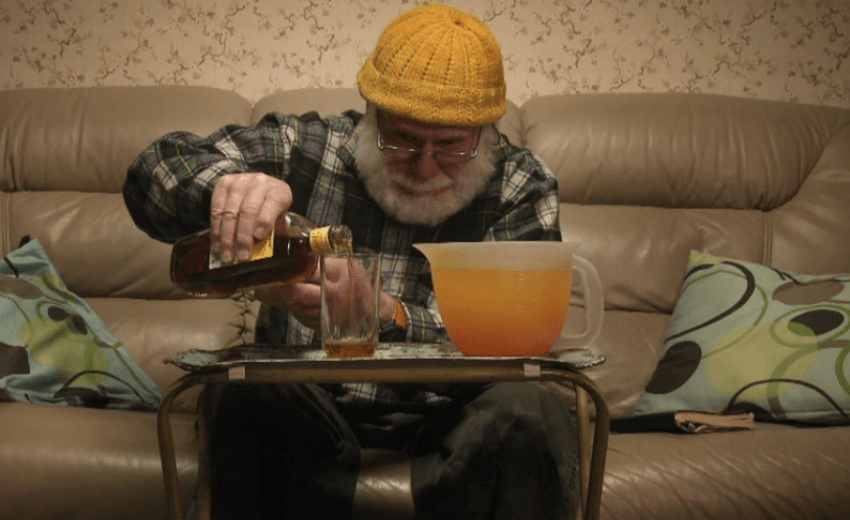 Alex Casey watches Subject: Dad, a show that proves there’s still nothing funnier and sweeter than emails from parents.

Everyone thinks their parents are the funniest people in the world, but it’s simply impossible for all of us to be right. If you’ve ever snorted at a weird, over-sharing text message, or gently hidden a particularly confused Facebook comment, I guarantee that Subject: Dad is essential viewing for you, the mortified sons and daughters of New Zealand. With a new episode available on Three Now every Saturday night, Josh Thomson (The Project, 7 Days) reads out emails from his dad to a rotating cast of his comedian mates. Think Comedians in Cars Getting Coffee but unmoving, and with a Soda Stream machine in the background.

Once we are introduced to David, Thomson’s weird and wonderful father who still potters about on their family farm, it’s clear there’s nothing but playful affection for the Timaru local. And what a character he is: a beanie-wearing hoarder and handyman who wouldn’t look out of place in Hunt for the Wilderpeople. As Thomson narrates his dad’s meticulously detailed reports from the farm to his famous friends, we cut to re-enactments of David Thomson eating broad beans on toast or melting lead nails to make sinkers. This is a man who keeps dry cereal in the fridge, frees dead cats from car grills and drinks rum and Thriftee at night. He only emails when it rains. You simply couldn’t make him up.

Lifting a popular style of dramatic recreation from the likes True Story with Hamish and Andy, or Comedy Central’s Drunk History, these re-enactments are not only ridiculously funny, but framed with all the charm, symmetry and whimsy that would make Wes Anderson jealous. With a bright yellow Life Aquatic-style beanie on, David builds an elaborate, hokey canon contraption in the paddock to fire fishing weights out to sea. Meanwhile, Josh Thomson and Jeremy Corbett shake with laughter reading his emails in Josh’s kitchen, trying to piece together the logic behind this mad machine that may or may not kill a nearby prize town horse if used incorrectly. The most surreal thing about Subject: Dad is that it’s all, 100% real.

Free from the bright lights of the Three studios, and without cues to hit and a studio audience to please, it’s refreshing to see some of our most successful comedy talent in a much more intimate and relaxed setting. Featuring the likes of Urzila Carlson, Dai Henwood and Guy Montgomery, Subject: Dad is also a chance to see the comedians improvise freely, make each other laugh very hard and follow David down the rabbit hole that is his rural life. “Caught nothing in the cray pot today,” reads Thomson aloud. “Probably because I used a pastrami sandwich as bait.” “Look, I’m no marine biologist,” responds Dai Henwood, “but I don’t think crayfish eat sandwiches.”

Subject: Dad is a pure delight. As fun as it is to see some of our finest comedians riff off solid gold material at a kitchen table, I can’t state strongly enough that David Thomson and his emails are the stars of the show. After discovering TradeMe, a profitable outlet to peddle his farm junk in episode two, Subject: Dad relives a heartwarming shopping spree.

“I have never had so much disposable income before,” he writes to Josh, “I became irresponsible and purchased some coloured beads, a pair of waders, several bottles of wine, some damaged tins of fruit, half a pig’s head and other luxuries.” Urzila Carlson responds just like anyone would when confronted with a completely oblivious comedy genius. “Holy shit.”