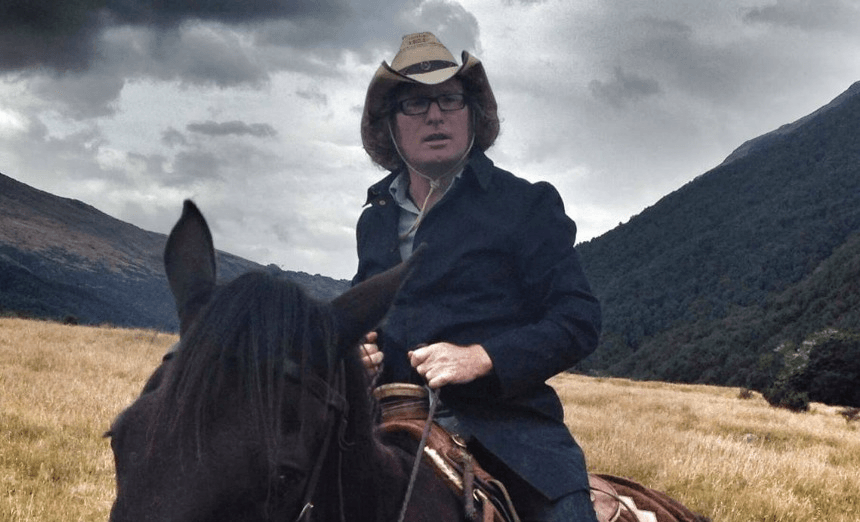 Te Radar’s Chequered Past tells the stories of New Zealand’s most colourful characters, both infamous and largely forgotten. He explains what drew him to our hidden histories.

There was a moment, caught between a grey Central Otago sky and even greyer rocks strewn through the tussock, that I wondered if this was it. Was I about to become a part of the history I had spent so many years eagerly reading and retelling? Would I be, like the characters in so many of the tales I recounted, just another buffoon in the hands of fate, killed by his own hubris? Or more romantically, Richard Burgess’s final victim? And if I was, wouldn’t it be depressing if the cameraman missed my impromptu tumble?

It wasn’t supposed to be this way.

The horse-hire firm had promised me a placid hack called Snoopy, but instead delivered Odin, a stallion with an ornery temperament and a clear desire to be anywhere other than under me. This beast was supposed to help me recreate that iconic image: Man and Horse alone in the vast wildernesses of the westerns. I’d devoured them as a child, not knowing then that these stories set in faraway America-land had also occurred right here in New Zealand.

My discovery of the murderer Richard Burgess, and his eponymous Burgess Gang, changed that. The equals of any of the American outlaws I’d read about, they marauded and murdered in a quintessential and oddly incompetent kiwi way across the South Island Goldfields in the 1850s and 60s. It’s the story I was attempting to retell for Te Radar’s Chequered Past when I found myself hurtling towards the hard Glenorchy ground after being summarily ejected from Odin’s saddle.

There are a couple of things people say when you tell them you’re doing a New Zealand history show. “Must be a short show,” they guffaw. Very derisive sound, the guffaw. Or they say, “Be a bit boring won’t it?” There’s still a lingering sense that history is a rather dry subject, laden with dates and facts and events and controversies we’d rather not address, and that New Zealand history is the shortest, driest and most tiresomely controversial of all. People generally mention the treaty, and then their eyes glaze over or they begin to fume.

But we have enough highwaymen, outlaws, explorers, stunt performers, intrepid women, inventors, and errant politicians to fill any number of Hollywood blockbusters. And the stories I love are all about these people, because to me history is about people. He tangata, he tangata, bloody he tangata as they say.

The idea behind Te Radar’s Chequered Past, and the live show it sprang from, Eating the Dog, is that the personalities are the story. Every story is about a person, people just like us with hopes and dreams, or murderous intent, or some odd thing they knocked up in the workshop that changed the world. People who thought they’d give something a bit too ambitious a go, and for whom things usually went a bit pear-shaped.

They’re the stories you haven’t heard, about people you’ve not heard of, or if you have, you probably don’t know all the delightful facets of their escapades, and the weird, often beautiful synchronicity of our tiny country’s history.

Take the story of Johnny Wray from our first episode. He wanted to run away to sea so in the early 1930s he bodged together a sturdy homemade yacht from scavenged timbers. He christened her the Ngataki, and then taught himself to navigate as he sailed off into the Pacific.

In the 1980’s, a young woman called Debbie Lewis wanted to run away to sea, so she bought herself a dilapidated boat – all she could afford – and taught herself to navigate as she sailed off into the Pacific. That boat just happened to be the Ngataki. She had no idea of its history when she bought it. What are the chances? Maybe in New Zealand, better than you’d think.

Filming Johnny’s story and interviewing Debbie on board the Ngataki, now owned by a trust dedicated to protecting our maritime heritage, shows how close we can get to our history, and in a way become part of the story ourselves.

As much as possible we cast people who had a connection to the characters they played; we have an actual fee paying nudist playing naked gardener Douglas Cook; we have a surf lifesaver we happened to spot while watching Piha Rescue playing Barrie Devenport, surf lifesaver and first conqueror of Cook Straight. Matua Parkinson, former rugby player and bush-loving hunter, portrays Brunner’s guide Hone Mokekehu. The Mad Butcher plays mad butcher Jackson Barry.

We have descendants playing their own historical relatives and soldiers played by men who on weekends, play soldiers. And then we have Snoopy the Placid Horse unexpectedly played by Odin the Terrifyingly Bad Tempered, because that’s how stories are born, and how people make (or become) history.

Watch Te Radar’s Chequered Past on TVNZ1, Saturdays at 8.35pm or here on TVNZ OnDemand