The follow-up to When A City Falls celebrates the people of Christchurch and the wins of the rebuild, but loses some nuance in the edit, writes Erin Harrington.


I’ve lived in Ōtautahi Christchurch all my life, but it took me until this week to watch Gerard Smyth’s 2011 film When A City Falls. This award-winning, observational documentary records the impacts of the Canterbury earthquake sequence that began on September 4, 2010, when a magnitude 7.1 earthquake, from an undiscovered fault line, threw everyone out of bed at 4:35am. Even ten years on, this viewing had to be under controlled conditions: daylight, frequent breaks, diazepam. Each time I’m confronted with that shaky phone footage from the appalling magnitude 6.3 quake on February 22, 2011, of people cowering in Cathedral Square as the bell tower collapses, or racing towards rubble of the CTV building to drag out the wounded and the dead, my skin goes clammy and I want to vomit.

But watching it has been important, even therapeutic context for Smyth’s 2020 follow up, When A City Rises – The People’s Story, which screened last night on television in a truncated form ahead of the 10th anniversary of the deadly February quake. They are companion pieces, one looking at cataclysm and the real-time effects of thousands upon thousands of earthquakes, and the other at the choices being made about the future of our altered, renewed city. Although both have been made to celebrate the people of Canterbury, they also act in tandem as a cautionary tale for the rest of the country about the human-made, bureaucratic aftershocks that accompany the seismic ones.

When A City Falls was filmed largely guerrilla-style over nine traumatic, bizarre months. Smyth is a seasoned film and television professional with 50 years in the industry, and he just grabbed his equipment and got to it. At the time he was living in the central city; from behind the camera he comments, laughing, that the Army “told me not to film, but I said I live here!” He is an empathetic and unobtrusive interviewer. People are quick to trust him with their stories, and there’s a terrific gallows humour that permeates some of these vox pops.

Curiously, almost no one, bar seismologist Dr Mark Quigley, is given an introductory caption in When A City Falls. The effect is that the voices of everyone – from the mayor and the bishop to the nice guy who sells bread at the market and the mum next door – are given equal footing. It’s a fascinating conceit, albeit one that requires you to recognise some faces. The film ends with a trip to disaster-hit cities in the US with urban design expert James Lunday. It offers a hopeful, aspirational view of how our central city could reimagine and revitalise itself as a place for and about people, reversing years of urban decline and residential flight. Ten years on this optimistic coda is coloured by the frustrating benefit of hindsight, so it’s an important bridge to the present. 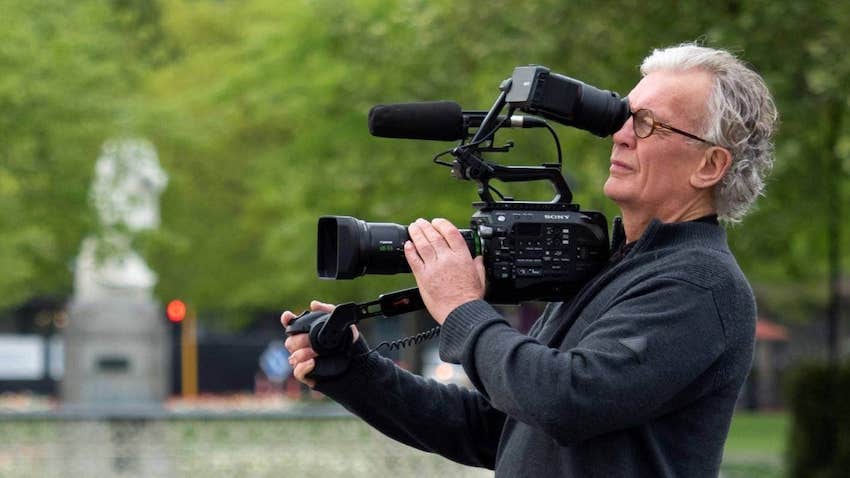 Filmmaker Gerard Smyth, the director of When a City Rises. (Photo: Supplied)

When A City Rises – The People’s Story takes a different approach to its storytelling, narrowing its focus from the district at large to the devastated central city. It walks us through the weeks and years after the initial disasters, starting as the Army locks down the CBD, placing cordons that wouldn’t shift much for 18 months. The people of Ōtautahi pour their hearts out in the remarkable, inclusive “Share an Idea” urban planning exercise, offering more than 100,000 suggestions to the council. Then the central government, keeper of the wallet, swoops in, rehashing the city council’s plan into a “100 day blueprint” (which actually took only 67 days). It’s an inorganic SimCity project made up of some genuinely great ideas plus a bunch of brightly coloured, just-add-water precincts. This looks slick in the whooshy launch video, but good intentions aside it completely fails to consider how people actually live and behave, let alone the value of upright buildings that suddenly have the misfortune of being in the wrong place. If your only understanding of the ongoing battles here have come from John Campbell’s advocacy work for screwed-over homeowners, you’ll be shocked at the scale and speed of the demolition, the perversity of some of the decisions and financial incentives. It’s horrifying, infuriating, disempowering.

To lead us through this, Smyth foregrounds the perspectives of a dozen or so experts and community leaders. This includes insightful interviews with historians, architectural and heritage campaigners, advocates for young people and the homeless, mental health experts, urban planners, and entrepreneurs. All have become unexpected champions for this city as we’ve moved from the heroic and honeymoon periods of disaster to the long, hard slog of rebuilding. Ngāi Tahu has a much clearer voice in this film than the first: their statutory role in the rebuild is emphasised, demonstrating beautifully what proper partnership can look like. There’s an illuminating discussion of the way Ngāi Tahu values and narratives shape developments along Ōtākaro Avon River, including innovative stormwater infrastructure that removes pollutants from metal building materials before the run-off enters the awa.

And there’s some amazing images, too. After ten years of filming and relationship-building, Smyth has hundreds of hours of footage up his sleeve, more of which you can see in the excellent Christchurch Dilemmas web series. We explore behind the fences at the neo-gothic Arts Centre (the biggest restoration project of its kind in the world) and meet Filipino construction workers building the hospital (the largest project of its type in the country). I love that we get to peer into flamboyant businessman Anthony Gough’s massive collection of beautiful shoes. All these flourishes highlight the human faces behind the recovery and redevelopment of our built environment. Filmmaker Gerard Smyth, the director of When a City Rises. (Photo: Supplied)

When a City Rises is an act of sense-making: it tries to understand how we got to where we are, and why, and it looks forward to where we might go. It was billed, for theatrical release, as “a film by us, about us, and for us”, chronicling how our experiences in the last decade are intrinsically connected to our built and lived environment.

But this cut for television has lost almost half an hour from the original feature, and to me it feels too brisk – as if this is a narrative that runs in a straight line from catastrophe to hope. Yes, it celebrates some of the massive wins, many in the face of the demands of a bullish central government. There’s the white-knuckle fight for the retention and restoration of the beautiful, world-class Town Hall. We see the Margaret Mahy Playground (a wonderland) and the stunning central library Tūranga, a place that’s genuinely for everybody. Spots like Riverside Market are celebrated for doing the tough job of dragging people who’ve become accustomed to the bland comfort of pop-up subdivisions back into town. It gives the middle finger to the government’s cherished (and unfinished) convention centre, a behemoth plonked obscenely in the middle of prime riverfront real estate.

It also skirts around the edges of how difficult, how bloody, how confusing these journeys have been, even though it does point towards all the overdue anchor projects that have barely started, and the social impact of the disappearance of cheap inner-city housing. We see positive outcomes, not the breakdowns, the fights that were lost, the fact that without more support the Arts Centre is royally screwed. Much of the last decade has felt like we’re stuck in the fog and friction of war, or a Kafka-esque gauntlet of fast-changing rules and priorities.

Then there’s the day to day. I live right next to the central city and walk through frequently. Beautiful new areas, from office blocks and hospo hubs to well-designed auditoria and parks sit next to massive, fenced-off empty lots that we’ve learned not to look at. Some derelict buildings, tattooed with graffiti, have been effectively abandoned by their owners, many of whom are landbanking or holding out for more insurance money; honestly, how dare they. The city that was and the city still to come are overlaid, ghostly, across a sea of Wilson’s car parks. I worry that this nuanced element will be lost, for the non-local viewer, in lieu of a more straightforward story that fits into 90 minutes of commercial time.

In some ways that’s fine, really – Smyth’s project is an uplifting piece of quiet activism, an account of the hard-fought wins, and it makes my heart full. I feel immense gratitude, and pride, and I want people outside of Ōtautahi to see it and understand. It would be churlish to ask this necessary and frequently moving piece of record-keeping to be something it’s not. But it’s an important omission to keep in mind in this otherwise celebratory exploration of people-centric urbanism, which asks all of us in Aotearoa New Zealand what a city actually is, who it should benefit, and what we think is worth fighting for.

When a City Rises is streaming on TVNZ onDemand now.