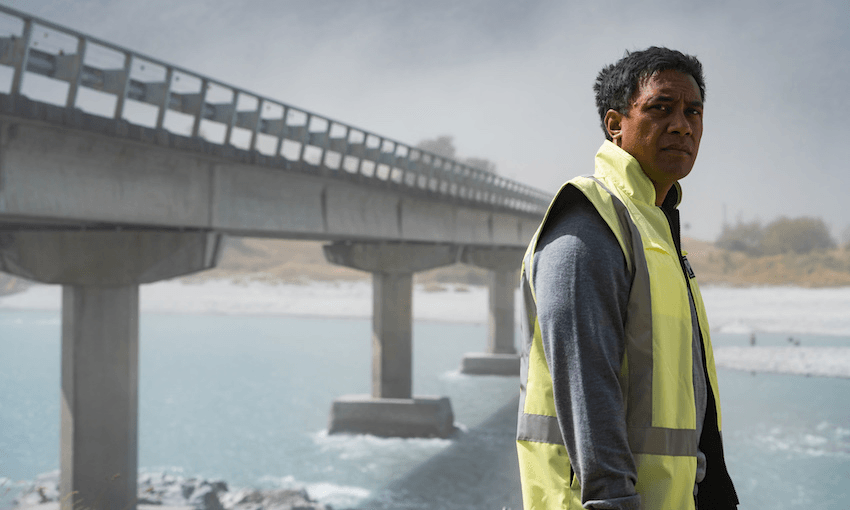 Well-crafted and tantalising, One Lane Bridge could be so much more

The plot and performances are compelling, but the TVNZ mystery is yet to quite match up to its spectacular setting, writes George Fenwick.

It has become such a core part of murder-mystery genre that you can hardly blame TVNZ1’s One Lane Bridge for leaning hard into “the setting is a character” trope. Queenstown, of course, is the perfect place for unease: deep lakes and misty mountains absolutely scream “bad shit happens here!”. Jane Campion utilised it perfectly in her 2013 masterpiece Top of the Lake, which arguably Broadchurch-ed before Broadchurch, and Mare-d before Easttown. One Lane Bridge’s first season, however, couldn’t quite match its formidable setting with the writing it needed to truly soar. With viewers being invited back to these towering peaks and icy rivers tonight on TVNZ1, has anything changed?

Yes, and no. One Lane Bridge picks up where season one left off, with Detective Ariki Davis (Dominic Ona-Ariki) now a familiar local figure after his fish-out-of-water beginnings, though he is still continually doubted by others about the strange visions of the dead that plague him. His police partner Stephan Tremain (Joel Tobeck) is battling his own demons of substance abuse and depression. Local power couple Charlotte and Mark “Haggis” McRae (Michelle Langstone and Phil Brown) are continuing their crusade of building some sort of heinous Kauri Cliffs-esque property paradise, putting them at war with local environmental activists.

Season two hinges on a key moment from season one: Davis’s frightening vision of Tremain hanging from the seemingly cursed One Lane Bridge (“it’s the titular role!”). It is the site of the tragedy that drove the first season – a long bridge spanning the river on which Rob Ryder (Jared Turner) operates his version of the Shotover Jet and Davis practises for the Coast to Coast race. His visions are thanks to his matakite, or second sight, and contribute to his increasing fear for Tremain’s wellbeing, particularly because his visions have carried truth before. I can’t say much more without spoiling a few twists and turns, but suffice to say Davis’s vision drives much of the action.

Here’s where One Lane Bridge runs into some familiar problems, however. The aforementioned location-as-character, Queenstown, is again doing a lot of heavy lifting – but at the same time, it’s almost as though it’s just holding the boom. One Lane Bridge is well-made, but it’s not really made with any particularly singular style. Queenstown acts as a beautiful backdrop, but where Top of the Lake deliberately extracted gothic mystery and a sinister chill from the surrounding lakes and mountains through careful camerawork and colour grading, One Lane Bridge lets the environment rest like a painting in the background.

It speaks to a wider problem with the series: despite its majestic setting, One Lane Bridge is visually flat. The odd drone shot provides some visual intrigue, but with largely ordinary camerawork, the second season doesn’t manage to improve upon any of the trappings of its first, in which much of the action was presented like any other police procedural. The atmospheric score adds some excitement, but where recent supernatural mystery series like Germany’s Dark and Australia’s The Kettering Incident took bold swings and experimented with form, One Lane Bridge stays on a safe and familiar tonal track. There’s the odd flourish when Davis experiences his visions, but for the most part, we follow the story with steady cameras and plain lighting.

That’s not always an issue if the plot and performances make up for it, which is where One Lane Bridge’s strengths come in. The tension between local environmental activists and the money-hungry McRaes is genuinely interesting, and creators Pip Hall and Phillip Smith cleverly explore how these conflicts play out in small communities where everyone is far too connected to make it a fair fight. Ona-Ariki is a compelling lead, taking audiences through a believable and sometimes moving progression of emotions as he attempts to understand his visions. Where Michelle Langstone could have played greed-driven Charlotte McRae as an evil Trumpian landlord, she instead comes across as a woman who genuinely believes she’s doing what’s right; when she’s paint-bombed at a protest, she’s confused, not incensed. Tobeck is unsurprisingly brilliant as the gruff Tremain, as is Alison Bruce as his wife Lois.

It’s a shame, then, that the script still occasionally falls short. Perhaps the rest of the season will prove me wrong, but characters didn’t always feel like they reacted to situations as real humans would. The most egregious of these moments is when Davis and Tremain take a good-cop bad-cop approach to shutting down an environmental protest: Tremain barks at them to pack up, while Davis acknowledges their permit and lets them carry on. This leads to an argument between the two, resulting in Tremain calling Davis a “diversity hire” and Davis calling Tremain a dinosaur in return. These comments, which struck me as rather relationship-altering, are never addressed again. It feels shoehorned into the plot, rather than organically grown from it.

But there’s plenty of well-crafted, tantalising mystery in the first episode to keep viewers hooked: a shocking death has implications for every character, Lois has some secrets up her sleeve, and there’s something fishy going on with Tremain involving teeth. It’s great fun watching a bunch of excellent New Zealand actors chew their way through these twists and turns, but I wish One Lane Bridge had been brave enough to truly leap into the unknown. Instead, we have a good story delivered with frustratingly familiar framing, and one that remains indebted to countless crime dramas that have come before.

One Lane Bridge is on TVNZ On Demand now, and screens on TV1 Sundays at 8:30pm.