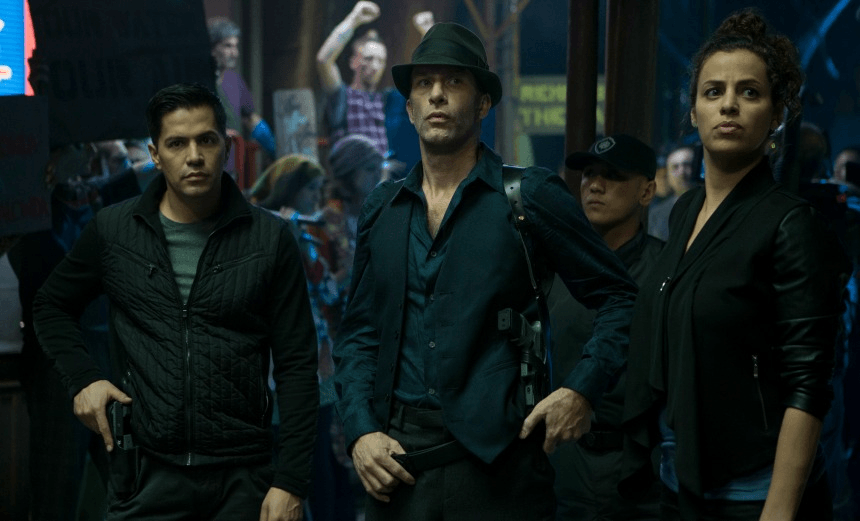 The Expanse is like The Wire… but in space

Aaron Yap plumbs the depths of The Expanse, a sci-fi space opera that’s drawn comparisons to some of television’s greatest.

It’s weird to think that the Syfy channel once spawned Battlestar Galactica, one of, if not the finest science fiction series of the modern television era. Today, the very mention of Syfy is cause for a dry retch. Their programming has been overridden by much, much less prestigious fare, with titles like Mega Python vs. Gatoroid and of course, the now-infamous Sharknado franchise.

Sure, it’s not their only content, but the glut of schlock has arguably altered our perception of the brand. The idea that Syfy would be capable of producing television that one could discuss alongside The Wire has become not just unthinkable, but laughable.

The Expanse changes all that.

I can’t recall the last time a TV space opera caught my imagination as much as The Expanse has. They are few and far these days, chiefly because they cost so much to produce. But I do know I’ve been jonesing for a big, bold sci-fi show to obsess over in the same way I did with BSG, Lost and Fringe.

The Expanse is hard sci-fi, cut like a fucking diamond. The no-cost-spared world-building is immaculate, deeply atmospheric and thoughtfully detailed. The action is consistently riveting, sometimes gob-smacking. Scale-wise, it’s pretty much as good as it gets for this kind of thing away from the big screen. And if you loved the punchy real-world parallels of BSG’s knotty political machinations, The Expanse has it all.

It might seem a tad premature to throw around comparisons to The Wire, but initial buzz has already likened the show to “Game of Thrones in space”, so to hell with it: The Expanse is the closest we’ve come to The Wire in space where, as glib as it might sound, the Solar System is basically Baltimore.

Based on a series of novels by James S.A. Corey – a pseudonym for the writing team of Daniel Abraham and Ty Franck – The Expanse launches the viewer into its textured, credibly lived-in ecosystem without much expository spoon-feeding. Admittedly I had to watch the pilot twice – you will need to stop your ironing for this one. In a nutshell, it’s the 23rd century, water and air are scarce, and tensions are flaring between three major colonies: the UN-ruled Earth, the independently militarised Mars and the marginalised mining people of the Belt.

Chuck in a Belt-sympathising radical group known as the OPA, and you have the stirrings of an all-out war.

What first grabs you about The Expanse is the scrupulous level of consideration that’s been invested into creating a realistic-feeling world 200 years from now. So far I haven’t seen much of Mars yet, and the stopovers on Earth have been brief, though enough to suggest a cushy, well-off society. The Belt, however, has been developed to the hilt. It’s a stunner of production design, with hints of Total Recall, Silent Running and Firefly. At the same time, everything feels fresh, unusual and seductive.

The Belters have their own unique language, a multi-ethnic mash-up that’s delivered without the aid of subtitles. They live under severe conditions. Water is rationed. Miners and children alike are prone to illnesses caused by dodgy air filtration. I love the notion that working predominantly in space has affected their bodies over time, making them sensitive to Earth’s gravity. Even a tiny detail like a visible crack on a character’s PDA – sorry, “hand terminal” – makes a difference in enhancing the believability of a futuristic environment that’s been around for a long time.

A little patience is recommended in the early-going. Several episodes go by before these plotlines and characters gel in any meaningful way. But when they do – and trust me, you’ll know – The Expanse crystallises into a rewarding, ambitious, arresting piece of sci-fi, coolly balancing plotty interplanetary intrigue with some of the most smashing visual effects you’ll likely see on TV today. If you thought BSG’s snap-zooming battles were ace back in 2002, you haven’t seen anything yet. Imagine a larger budget and over a decade worth of effects advancements. That’s how phenomenal The Expanse looks.

This one’s a keeper.