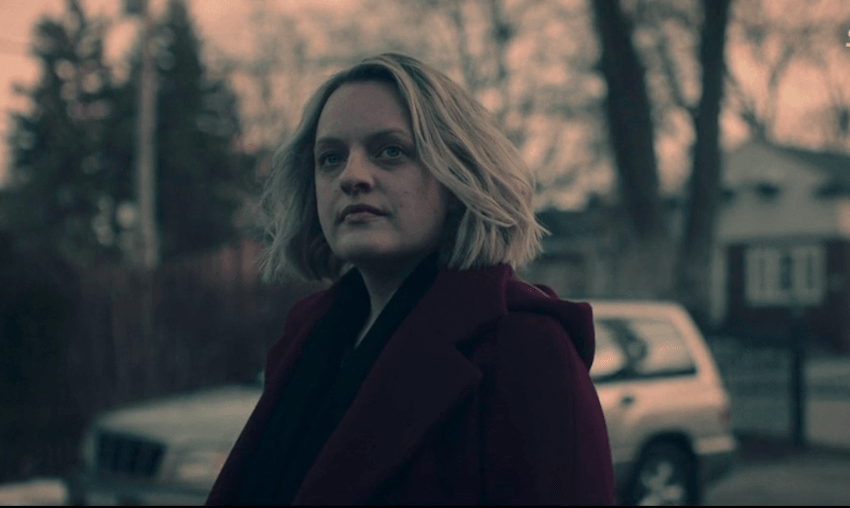 The Handmaid’s Tale season finale: At last, something to smile about

The Handmaid’s Tale season finales are always big, but this finale went bigger than we expected. Tara Ward recaps the gripping final episode of season four.

This was the season of The Handmaid’s Tale when June Osborne got almost everything she wanted. She escaped from Gilead, reunited with her husband and daughter, and kissed her boyfriend in a convent. It’s hard to top those hard-fought wins in one hour of television, but by hokey, this finale pulled it off. Episode 10 had twist after twist and shock after shock, making this a most satisfying trifle of tragedy. Every layer was delicious, even the moment someone sent Serena Joy her husband’s finger in the post.

An eye for an eye, a finger for a finger, a dead commander for a lifetime of misery. Is this the wrong moment to compare the flashbacks of June and Fred’s Jezebels carry-on with Kath and Kel’s open mouthed pashing? It is? Sorry about that.

June’s been busy this season, and the last thing on her ‘to-do’ list is seeing Fred Waterford locked up for so long that he can’t remember how to spell ‘I am bin juice’ in Scrabble. After last episode’s bombshell that Fred had cut a deal, it seemed the slippery little sucker would get away with his crimes. American government agent Tuello considers Fred’s words more valuable than June’s, and June’s fuming at how the justice system let her down. “Weak men make the world go round,” she tells Tuello, striking deep into his weak-man core.

Waterford will be sent to Geneva, an apparently magical land where losers are absolved of their crimes and can eat as much dark chocolate as they like. The Waterfords are clawing back their power, and while the American government squeezes Fred for the last pieces of Gilead intelligence, Serena Joy hits her stride. She’s now Fred’s PR agent, manager and lawyer, and demands Tuello provide better internet access. Is this what happens when women are allowed to read and write? Poor Tuello. He really has his work cut out to get this sleazebag rapist the freedom he so desperately desires.

The irony is strong in this episode, especially when Serena announces there’s no way she’ll have her baby in Canada due to security concerns. I guess her birthing plan is mostly filled with fondue and strudel, with Fred giving a dystopian yodel as the child arrives. Look, I want Tangy Fruits to return to cinemas around the country, but that doesn’t mean it’s going to happen. It’s the same for Luke, who wants June to stay positive and move on from Waterford. LOL! Luke is so funny.

Nothing says moving on like meeting your abuser in prison for one last catch-up. Fred offers June a typical weak-man apology and admits to missing Offred, but the joke’s on him. Offred is still in that room, pretending and playing Waterford at his own game, just like she used to in Jezebels. Afterwards, June tells Luke she’ll put Waterford on the wall, and she doesn’t mean in a frame next to a jaunty ‘live love laugh’ decal.

June persuades Tuello to meet Commander Lawrence in a diner on the border, where Lawrence suggests swapping 22 Gilead women for old mate Waterford, “a used Subaru of a fellow countryman”. That’s doing used Subarus an injustice, but Tuello agrees the lives of these women are more valuable than Fred’s. As Fred leaves for Geneva, no doubt dreaming of the giant Toblerone he’ll pick up in duty free, Tuello arrests him and takes him to the Gilead border, despite Fred uttering the universal cry for freedom: “I’m a man and I have rights.”

Tell that to the mailman who finds your finger in the post, Fred. Tell that to Nick, who’ll do anything for a sneaky kiss with June, including dropping Fred in a forest filled with vengeful women. June wanted Fred to feel the terror she experienced the day Gilead took Hannah, when June thought she would die. Fair play to her, she knows how to put the shits right up a bloke. Fred is literally scared to death.

It’s not often you watch The Handmaid’s Tale with a smile on your face, but this finale delivered the grins like nothing else. There was the ambush of Fred’s arrest, Fred being exchanged for the women, Fred being shackled and bound like a common handmaid. It was everything Fred deserved, and seeing June emerge from No Man’s Land to claim her own justice was the icing on the dystopian cake. A quiet chat in the detention centre would never be enough. We should have known that June could never let Waterford go.

There’s no time to question why Nick is in No Man’s Land but doesn’t walk into Canada, or how June managed to pull this off. The final scenes of the season are brutal, as June and Emily lead a group of women through the forest to kill Fred. It’s too dark to see what’s happening, but you get the gist. Serena waits for Fred’s Zoom call, but Fred will never log on again. The women chase him until he falls, and attack. Later, we see Fred’s body hanging on a wall. It seems Offred didn’t disappear after all.

A bloodied June returns home to a horrified Luke. “Just give me five minutes with her, and then I’ll go,” June says, giving Nichole one last hug. June made her choice. Justice has been done, but at what cost? That satisfaction is replaced with the familiar Handmaid’s Tale feeling that sometimes, June is her own worst enemy. Let’s hope it was worth it.

The Handmaid’s Tale is streaming on Neon.