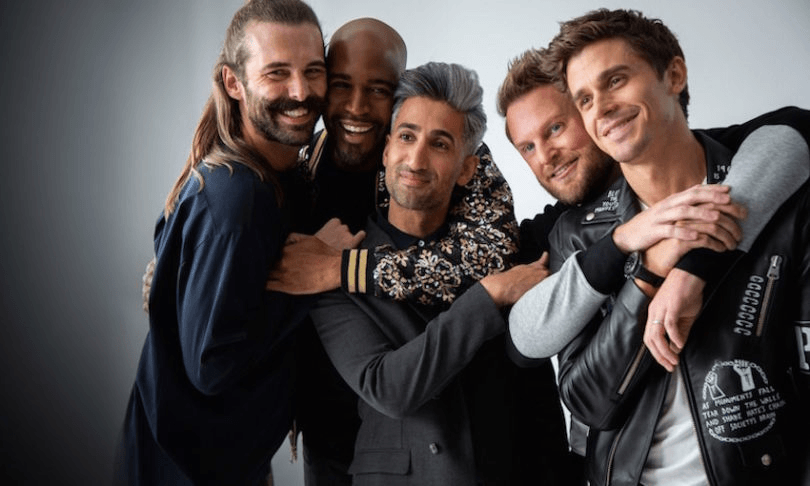 The Fab Five, of which Tan (centre) is obvs the fabbest.

My problem with Queer Eye

The Fab Five, of which Tan (centre) is obvs the fabbest.

The fourth season of Queer Eye drops today on Netflix. Sam Brooks reflects on his difficult relationship with the show, and where it sits in mainstream culture.

For depressingly many people, Queer Eye for the Straight Guy was an introduction not just to gay culture, but to real-life gay men. A makeover show featuring five gay men who are masters in their chosen field – food, fashion, design, culture, grooming – it was queer male culture in the early 2000s what RuPaul’s Drag Race is to drag now.

So when I heard that Queer Eye was being rebooted, my reaction was one of trepidation. Even though the show  promised to be less to be about making people over (literally the show rebranded it to “make better”) and more about the Fab Five’s reaction to whatever community they happen to be visiting, it was still Queer Eye. The main difference appeared to be now the show was lacking a lot of straight guys – the Fab Five now had the task/responsibility of improving lives across the spectrum. Lucky them!

The response was rapturous. Everyone I knew seemed to be moved to tears by this show, and that, honestly, made me angry. There’s so much good queer content out there – so many films, shows, books, music – and the depiction of gay male culture with which most people engaged was a reality show that perpetuated as many stereotypes as it aimed to dismiss.

I didn’t engage. I did my best to ignore it. Every year a season would come out. People would cry about five queer men improving other people for about a week, and then would move on.

This year, I decided to engage. I’ve now watched half the season, and I can confidently say that, well, it’s just fine.

It never resolves the uncomfortable truth that the Fab Five invariably put themselves at the centre of a show that is supposed to be about someone else’s life. The first episode of the fourth season is a classic example: the Five go to ‘grooming expert’ Jonathan Van Ness’s old high school to improve the life of Kathi (definitely sic), a woman who seems genuinely content with her life. The episode ends up being about Van Ness’s experience of coming home, rather than Kathi’s self-actualisation and supposed improvement. The phrase “You’ve helped us more than we’ve helped you” is implied, if not outright said, in nearly every episode.

But my issue with the show is not so much with the actual content. My issue, still, is with its place in culture.

The show presents a false spectrum. The Fab Five appear to represent a wide range of queer maleness – two of the Five are sexually fluid and one is non-binary; the five of them are racially diverse – but really presents a sanitised, heavily produced, packaged ideal of what the mainstream thinks a queer man looks and sounds like. That’s both a result of the platform (this is Netflix, not the Rialto Channel) and the genre. If you want dark, gritty realism, you’re probably not going to find it on a reality show intended to make people feel warm and fuzzy.

The show also still positions queer men as the purveyors of culture (he says, as both a queer man and literally the culture editor of this website). Which is not inherently bad, but positive stereotypes are still stereotypes. If the only queer men on television are punctilious cultural mavens and gurus, then that’s what a lot of people expect in real life. I’ll never forget a flatmate’s grandmother’s response when I moved in: “Oh, he’ll keep the place neat and tidy, then.” I wish I could blame that flat’s messiness on sheer spite rather than my own personal flaws.

Fundamentally, however, this is a show about five queer men coming into someone’s life, improving it with food, culture, grooming, fashion and design. And if this is how a mainstream audience engage with queer culture, what could be wrong with that? How can I hate it, and how can I refuse to engage with it?

To someone whose first experience of a gay man was Queer Eye, I was like a baby Fab Fiver. Except I didn’t look like these guys, I didn’t sound like these guys, and I didn’t have any skills that could make me a part of being any Fab Five. Definitely not one that aired at 7.30pm after the news.

Culture has moved on since the OG Queer Eye for the Straight Guy met its end in 2007. We’re seeing more representations of queer men, and people from all across the gender and sexuality spectrum. A film about a gay black man won the Best Picture Oscar. An openly gay man won the Song of the Year Grammy. Hell, on the very same streaming service as Queer Eye you can watch Special, a show about a disabled gay man. Yet still Queer Eye still soars above all.

As a minority, you want to see yourself represented. And if the one thing that’s purported to represent you doesn’t represent you, you feel horrible. When you grow up in a culture that devalues what you are into stereotypes and into jokes – that dehumanises you through abuse and ignorance – you’re going to reject the thing that mainstream culture tells you that you are.

For it all its flaws as a show and for all that it is not to my own personal taste, Queer Eye is not the problem. The problem is a culture that still today lacks adequate or even abundant representation. Even worse, it lacks mainstream, widespread consumption of that representation. Because why on earth would you engage with something difficult, something unpleasant, something thorny, when you could watch something that makes you feel good?