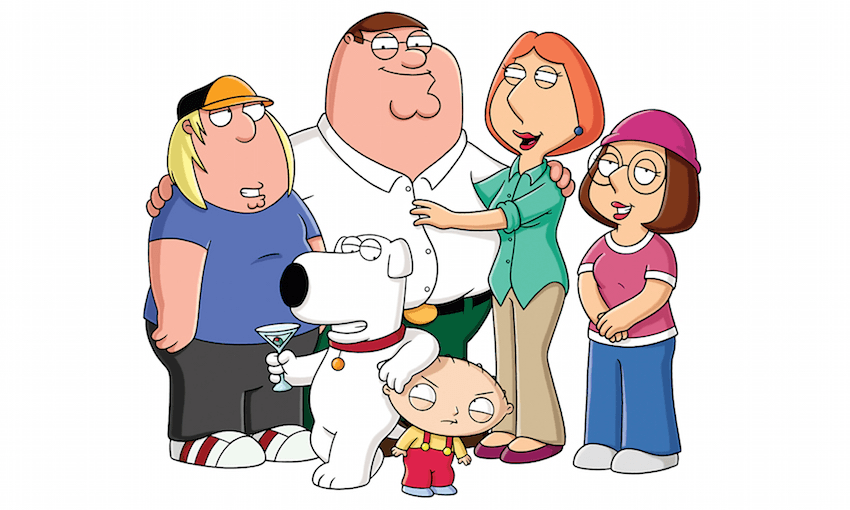 It’s just quite funny, that’s all: In defence of Family Guy

Family Guy has been on our airwaves for a slightly interrupted nineteen years, and it’s been critically reviled for almost as long. Sam Brooks has seen all of it and thinks it’s time he stood up for the perennial punching bag.

There have been three hundred and nine episodes of Family Guy and I have seen every one of them. Some of them more than once. When I went overseas a few years ago, I spent a large chunk of one night making my way through an entire season of Family Guy with my best friend.

This also isn’t an endorsement of the entire Seth MacFarlane canon. I have no time for The Cleveland Show, The Orville lost me after one episode, and the less said about Ted, the better. (American Dad is, however, one of the best animated comedies on TV right now, right up there with Archer and Bob’s Burgers, and no, I will not be mounting a defence of that one, thanks.)

First, a brief history lesson. I’m old enough to remember when enough people bought Family Guy DVDs that they uncancelled the show. People bought DVDs, you guys! There were no hashtags back then, y’all. This show used to be critically acclaimed! People loved this show, and a great many people watched it. Sixteen seasons later, it’s probably most well-known for people being like, “Huh. Is that still on?”

The premise, if you somehow don’t know it, is simple. A white, middle-class, suburban family has travails. There is a bumbling father, a highly-strung mother, a nerdy and outspoken sister, and a burnout-ish brother. So, you know, The Simpsons, except with a talking dog and a talking baby with a British accent. Add in a shitton of cultural references, an ever-increasingly reliance on non-sequiter cutaways, and an inexplicable long-running gig for Mila Kunis, and that’s Family Guy.

Since its un-cancellation in 2005, there’s been a steady decline. There were the Star Wars specials, which people ate up at first, but then as the creators got visibly and audibly tired of doing them, so did audiences. There was the bottle episode which got way too heavy for Family Guy, and not in a good way, and there was the clear publicity stunt of killing off Brian, only to revive him a few episodes later. And who could forget the nightmare inducing crossover episode with The Simpsons, a nadir for both shows (more clearly for one of these shows than the other).

Basically, what I’m trying to say is that this is probably the only good press that Family Guy will have had in the past ten years. It’s become a punching bag, and for reasons I completely understand. Shows rarely make it into double-digit seasons while still being at the height of their game, let alone at the height of public opinion.

Additionally, Family Guy is hardly the most progressive of shows. For every progressive move like the hiring of a Down syndrome actor to play a Down syndrome character, there’s about a dozen jokes of dubious appropriateness. And while its gotten better, there’s a lot of incredibly uncomfortable homophobia, racism, transphobia, slut-shaming and sexism in the early-to-mid seasons. I neither excuse nor defend this, and I make a conscious effort to avoid the episodes where there occurs.

This isn’t coming off like a great defence of this show, is it?

OK, there are a whole lot of caveats, but Family Guy is a piece of art (and yeah, it is art, despite the first seasons being one of the most truly visually ugly products that Western animation has ever given us) and a whole lot of us could do with a lot more acknowledged caveats when defending the problematic art we enjoy.

Family Guy has never been the most consistent show, and I’d say the period between 2008 and 2012 was a pretty dark one (another caveat in itself: a four year run is longer than a lot of shows get in total) defined by all of the low-points I mention above. But what it does provide is a constant run of jokes. Some of which are genuinely great, and many of them provide that little rub to whatever part of your brain makes you feel good when you recognise something is funny.

And sometimes the good does pass into great. Not often, not consistently enough for it to be a great show, but sometimes. There’s Alex Borstein’s reading of ‘meth is a hell of a drug’, there’s the entire first Star Wars special which straddles that tenuous borderline between scathing parody and genuine love as well as anything, and there is the surprisingly brutal (and alarmingly funny and well-choreographed chicken fights):

That’s it. I think the show is really quite funny, and it has a high enough hit-rate of jokes that I’m never going to be bored watching twenty-two minutes of it. The voice work is good, the guest stars are funny, and they find new, if not particularly wheel-reinventing ways of riffing on their now quite large cast of characters. It’s not a work of genius. It’s not breathtaking. I don’t think it’s the best comedy out there, the best animated comedy, or even the best Seth MacFarlane show. (Seriously, check out American Dad.)

I’ve been watching the show since I was nine. I own the first six seasons on DVD still, because I am a hoarder and will remain one for the rest of my life, when I drown in physical media containing shows I used to watch as a preteen. There’s a comfort in knowing that Brian is gong to say something insufferable that’s a critique of the left, Stewie’s going to be a silly British baby who says something a British baby never would, and everybody’s going to hate Meg because I think they locked Mila Kunis into a contract and she has zero enthusiasm for the show anymore.

That’s what Family Guy is. The KFC of television. It feels amazing in the moment, but you feel a little bit dirty afterwards. Doesn’t stop you going back, though. Bring on episode three hundred and ten!