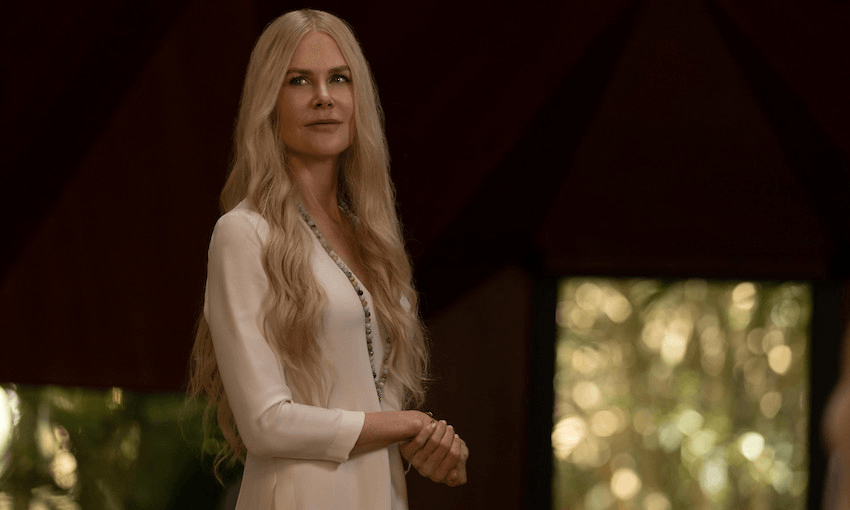 The latest entry in the Kidman-Kelley-Moriarty canon is their weakest one yet, especially in such a crowded year for limited series, writes Sam Brooks.

It’s probably to the detriment of Nine Perfect Strangers that it comes on the heels of The White Lotus, a much-loved, much-memed HBO series with a superficially similar conceit: a bunch of awful rich people go somewhere to try to relax, and things do not go to plan. While The White Lotus was a glorious satire that delighted in making the audience feel as awkward as possible with a fairly simple mystery at its core – who’s in the box? – Nine Perfect Strangers is a straight-up mystery box thriller, with more narrative threads to pull at than a cashmere scarf.

It’s a shame, because while Nine Perfect Strangers is an engaging watch, it’s nowhere near as profound or fun as The White Lotus, a series that precedes it only by sheer scheduling misfortune. The cast is equally as stacked as that series, though. Nicole Kidman is the headliner, but the rest of the ensemble is rounded Melissa McCarthy, Bobby Cannavale, Regina Hall, Luke Evans, Michael Shannon, and Samara Weaving playing the imperfect strangers who end up at a wellness centre that is, somewhat obviously, not what it seems.

Throughout the series’ eight episodes – six of which were watched for this review – secrets are revealed and alliances are formed while relationships and families fall apart. All the while, a mystery slowly unfurls under the surface as everybody realises exactly why they’re at the resort, and what in their history brought them there. (Spoiler: It’s unresolved trauma.) While on a surface level The White Lotus seems like a good comparison point, Nine Perfect Strangers sits much closer to the work of its two key creators: novelist Liane Moriarty, who wrote the source material for this and Big Little Lies, and David E. Kelley, who created Big Little Lies and last year’s Kidman-starring The Undoing.

Nine Perfect Strangers takes a formula that’s worked very well for Kelley and Moriarty so far: stick bona fide limited series hitmaker Nicole Kidman in a wig, surround her with acting heavyweights and fill the room with a mystery fog that only clears in the last five minutes of the final episode. Where Nine Perfect Strangers differs, in a key and crucial way, is that it presents much more of an ensemble, and frankly, far less of a compelling mystery.

The series is impeccably made, and the stunning New South Wales location makes for some splendid views, but the glossiness reveals how little Nine Perfect Strangers is interested in probing beneath that surface. It spends more time circling the mystery at its centre than it does diving into the lives of the people who inhabit it, so the actors end up doing a lot of the heavy lifting to keep the audience engaged. It’s not that we care about these people, exactly – great actors don’t make up for shitty characters – but the performances are enough to keep us interested even while the plot trundles slowly along for a contractually obligated eight episodes.

Which brings me to the bewigged elephant in the room: Nicole Kidman. After pivoting to TV with Big Little Lies in 2016, Kidman seems now to be an annual fixture of the small screen calendar, with diminishing returns. Although she was tremendous in both seasons of Big Little Lies, and barely more than fine in The Undoing, she’s working far out of her range here. Masha, a Russian wellness guru with unclear motives, is not a role that works to her strengths; Kidman’s remoteness doesn’t feel terrifying so much as it feels empty. She ends up not playing the character’s (multiple) secrets, but the opaque mask that sits above them. When you combine that with a dollar-store wig and a dime-store accent, it makes for a glaring outlier in a show that needs cohesion.

It’s a shame that Kidman is so off-kilter, because everybody else is pretty much, well, perfect. The two standout performers are doing work that sits a fair bit outside of what we’ve seen them do previously. Melissa McCarthy, playing romance novelist Frances, is a raw nerve the entire time she’s on screen. McCarthy plays each vicious barb thrown out to the other guests like she’s carving them from her flesh; every insult costs her just a little bit of herself. McCarthy has always found the dark and the real in even the shallowest comedy, and to see her do the same in a dramatic context is a genuine thrill.

The other standout is Regina Hall, flying high off a career renaissance thanks to an excellent performance in Support the Girls. She’s an absolute revelation here. She has perhaps the trickiest role in the series as Carmel, a meek, spurned wife whose anger slowly, and violently, bubbles above the surface when you least expect it. Hall’s take on the role is electric; eyes constantly darting around to see if somebody is judging her, and voice so shaky she can barely finish her sentences. It’s not a naturalistic performance, but it’s a deeply watchable one. The show is at its best when it focuses on her.

In any other year, Nine Perfect Strangers might have been welcomed as a good-enough romp, but in the past 12 months we’ve seen some of the best limited series that have ever aired on TV: The Queen’s Gambit, Mare of Easttown, The Underground Railroad, WandaVision, I May Destroy You, and The White Lotus which, again, is a better take on this subject matter. These are series that have either pushed the form forward or been so compulsively watchable that we kept tuning in week after week, episode after episode.

The disposable nature of Nine Perfect Strangers and, frankly, the last two Kelley-Kidman collaborations, puts it far behind these other series. There’s not enough edge, depth or personality to it. By the time the credits roll, what you’re left with is the feeling that you’ve watched some good actors do good acting and honestly? You can get that anywhere.