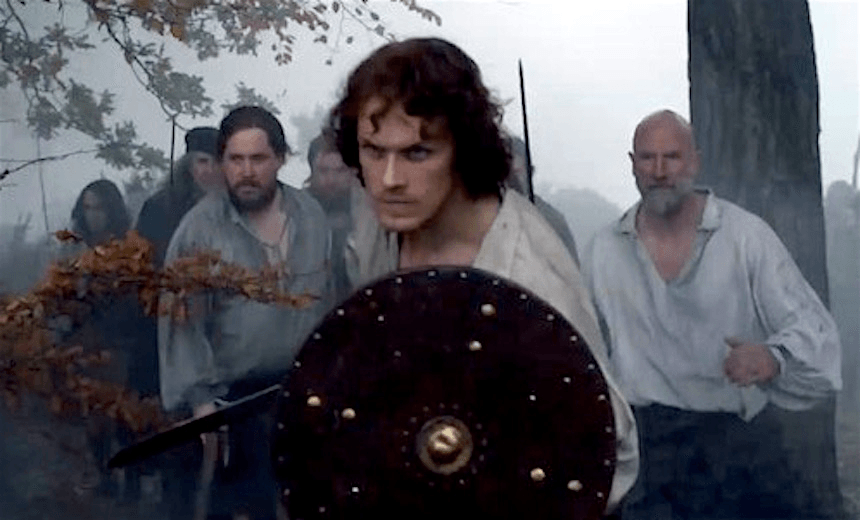 Struggling to make it to September without new Outlander episodes? Tara Ward offers some suggestions to see you through.

Somebody alert the authorities, because Droughtlander has set upon us like a rampant case of eighteenth-century smallpox. It’s that tortuous time between Outlander seasons, when last year’s Parisian double-agent escapades seem but a distant memory, yet the joyous prospect of 13 brand new episodes of hot Fraser hijinks seems an impossible dream.

I’ve had many impossible dreams during Droughtlander, and nearly all of them featured Murtagh’s beard, a wedge of cheddar and a tiny French donkey.

It’s a miracle we’ve made it this far. September is months away —MONTHS, I TELL YOU — but conditions are already unbearable. Fans are being forced to wear their Fraser tartan leggings in public and rest their dehydrated heads on a Jamie Fraser pillow, just to get their regular dose of Vitamin Ginge.

I blame the thirst. The never-ending, tartan-flavoured thirst.

Parched and delirious, Outlander fans are asking a question as old as time-travel itself: how will we ever make it to Season 3, when our only between-season sustinence is some shaky footage of Sam Heughan in a paddling pool and this photo of a wooden barrel?

Listen, when times got tough for old mate Jamie, you can bet your highland hotcakes that he didn’t spend his days crying into his Outlander shower curtain. H to the Aggis, no! When the shit hit J-Fray’s fan he survived by eating grass — which sounds crazy af but it obviously did spectacular things for his hair.

I’ve come up with several similarly ingenious survival tips to drag us through the long, dark months until the blessed ginger rain pours down upon our cracked and withered souls. Now, don’t blame me if this shit doesn’t work. Desperate times call for desperate measures, and nearly anything is better than sitting through S1’s travelling minstrel episode just to get our next Claire Randall fix.

So, let’s drink in the top ten tips for surviving Droughtlander. Hold onto your hankies, because it’s time to dive into a long, cool glass of dumb ideas, much like a Highland laird launches into a hot bowl of mashed potatoes — face first, and with no time to waste.

Also not skiting, but I had a 75% success rate on the first three suggestions. You’re welcome.

1. Run through the streets in a flannelette nightie shouting “HELP I SEEM TO HAVE FALLEN THROUGH TIME”.

2. Talk only in Outlander catchphrases. Mark me, it’s hilarious.

3. Use lawn clippings to whip up some medicinal tonics for your friends and family. If they dare protest, stare intently at them before saying “people disappear all the time” and silently turning away.

4. Discover what it really smells like under Jamie’s kilt. See, dreams can come true.

6. Unleash a herd of cows in your house just to see what happens.

7. See how many words you can make out of ‘Sassenach’. FYI I only got ‘ass’ before my head started to hurt and I had to light my stinky under-kilt candle to bring myself out of myself.

8. Make your own set of Standing Stones. Hours of fun for all the family.

9. Tattoo an Outlander character onto your boob. Oh wait, someone already did.

10. Learn Gaelic so you can say “FFS, is it September yet?” in more than one language.

If all else fails, maybe give that old time-travelling malarkey a crack. Honestly, how hard can it be?

Catch up on Outlander before season three arrives later this year, exclusively on Lightbox.